A Guide to Adelaide Central Market

It’s the oldest market of its kind in Australia, and has secrets that are still being unearthed. But what's the best way to tackle Central Market? 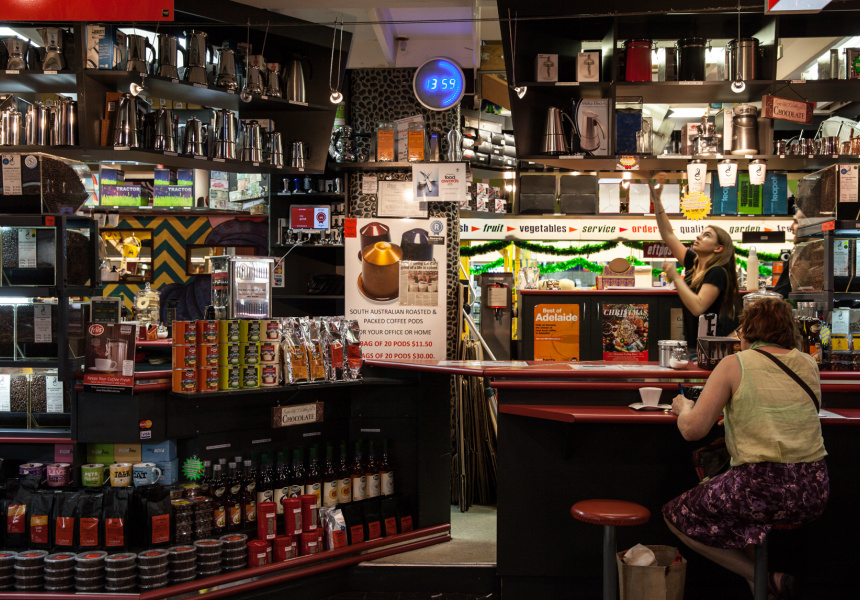 The Central Market’s story begins with a schism between Adelaide’s east and west. In a “little rebellion” in 1869, a pod of disgruntled grocers packed up their produce and split from the East End Market in Ebenezer Place.

Since then it's been known by several names – until 1965 it was called City Market – and revamped and overhauled, the market has run in the space between Gouger and Grote Streets for nearly 150 years.

The market grounds have survived two catastrophic fires: first in 1925, and then in 1977. As recently as last year, fire-stricken timber was still being unearthed. More secrets of the Market continue to reveal themselves: vast cellars have just been reopened and explored for the first time in living memory, and the tower of Federation Hall will soon become a brewery.

Through all this, the market has offered consistent value and stellar fresh produce. Here are our favourite places to shop.

The market has 20 dedicated fruit and vegetable stalls. Between them, they sell a million kilograms of produce each month. Central Organic was the first to be certified by the Organic Growers and Retailers Association of Australia.

Stephan Oulianoff, who supplied vegetables to the stall for a decade before buying it in 1982, was told he wouldn't last six months. More than 30 years later, he still proudly displays his certification and can show you farming records proving every single item on display is organically produced. “It’s not a gimmick,” he says. “We were called weirdos, but then you look at me – at my age – I’m 82. I’m still working, I’m still talking.”

Not far from Central Organic is House of Organics & Sustainably Grown Produce. It offers a three-tiered system of classification to help navigate its stalls. Red labels are for conventionally grown or undetermined farming practices. Blue labels show produce treated with minimal spray. Green labels are for organics.

One man in the market who can help with all things fungal: Marco Marinelli, the Mushroom Man. Marinelli grew up in the market, and was encouraged to buy the stall by his father. But he needed some convincing.

“I just thought it was the most ridiculous stall ever,” he says. Now, of course, he’s grown to love mushrooms in their thousands of varieties, and enjoys teaching others how best to use them. Often there are demonstrations at the stall, so you can see and taste products such as truffle salt in action.

For Richard Gunner, who owns outback butcher Something Wild (and Feast! Fine Foods), the flavours that scream “red dirt and blue sky” are red kangaroo, bush tomato and quandong. All the Australian game at Something Wild is carefully chosen, but the Paroo Premium Kangaroo is king. “We would never dream of sending off a mixed run of bulls and cows and calves and yearlings and selling ‘beef’,” Gunner says. “We pick and choose the best to get consistency in meat quality.” Paroo applies this same principle when selecting red kangaroo.

For something more familiar, pop by The Mettwurst Shop. It’s tiny and dark, a cool little shop tucked between noisy stalls, piled high with garlicky sticks of German mettwurst, and straps of artisanal jerky, hanging like holly from the rafters.

Owner Mark Brosnan is a gifted businessman who takes real care with his customers. He’s a well-known character, and had been a hairdresser and a poultry seller at different market shops before settling into his current home-away-from-home. Try an oversized Grandfathers mettwurst, or a garlic and red wine salami.

You can’t head to the market without trying the cheese. Say Cheese, along with sister-stall The Smelly Cheese Shop, is at the heart of the complex, and was established in 1992. Though it has a local focus, it also explores spectacular imported varieties, such as hard-to-find Pyrenees alpine cheese, Fleuron Vache Brebis and a gorgeous new inclusion: a French variety washed in Champagne rosé.

To round out your experience, pop into Lucia’s Fine Foods for olive oils, pasta, bread and crockery. Charcuterie Traiteur is next door, for a panini or tasting plate of cured meats and cheeses.

Nearby, The Grind @ Central has you covered for caffeine. It sells beans, blends, ground coffee, loose-leaf tea and two types of customised Nescafe pods: reusable ones, which you can fill with your own grounds, or house-made pods, ready-stuffed with The Grind’s premium varieties.

It wouldn’t be a trip to the Central Market without Dough. Its star product is a fig and fennel loaf. Hot from the oven or torn into chunks and smeared with goat’s curd, this is the pinnacle of baked goods in the city centre. 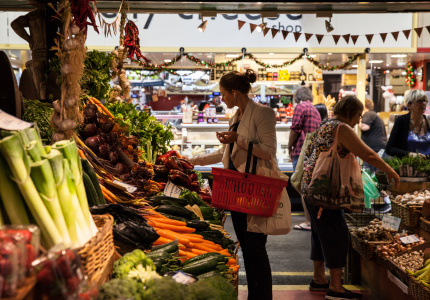 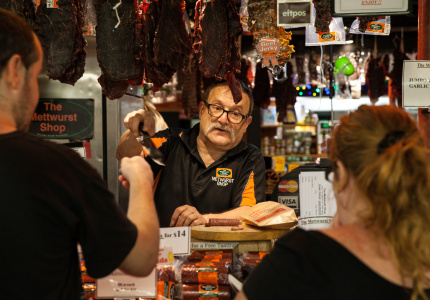 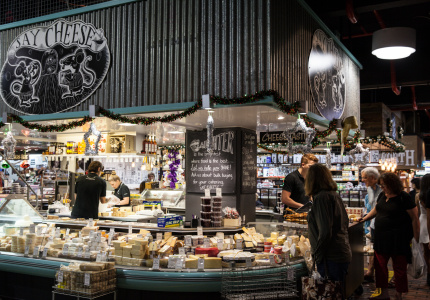