The Darling Square venue is celebrating with a new flagship wine label and bottomless brunch. 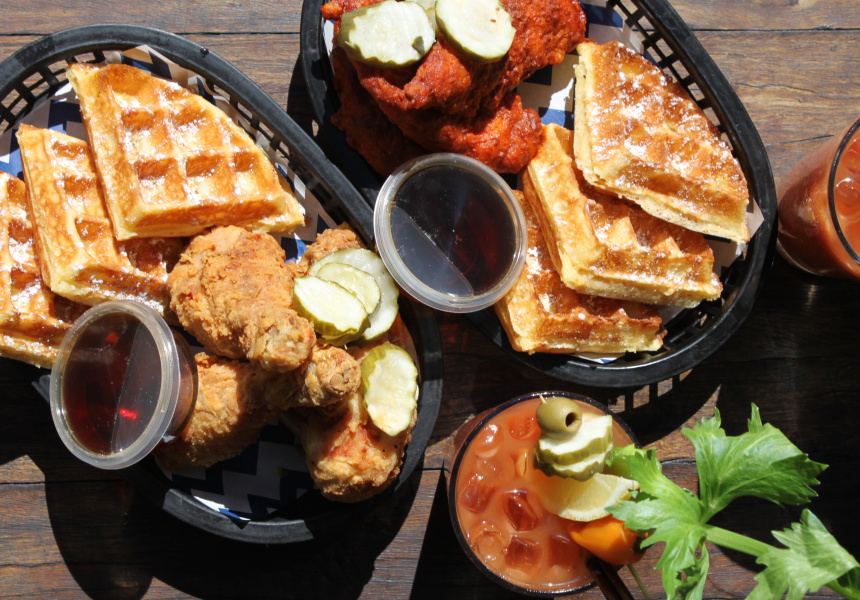 First it brought its spicy wings to Barangaroo and Tramsheds, now Haymarket will get to enjoy the Belle’s formula of hot chicken and natural wine. The shiny new venue will also get two shiny new additions: bottomless brunch and Belle’s own brand of natural wine.

Pull up a pew and try the red or white of the collaborative house drop Little Darling, which Belles founder and head chef Morgan McGlone described as “free spirited”. The “party red”, he says, features a blend of shiraz, malbec and vermentino, and is the result of trips to vineyards in Victoria’s Gippsland and Heathcote. The white is a skin-contact blend of originally grown sauvignon blanc and riesling from VIC’s Mornington Peninsula.

“I’m a big fan of Rob and Barney’s wines, so we were pumped when the opportunity arose to work with them on the Little Darling label,” says McGlone. “We care as much about the juice as we do our chicken.”

Sydney artist Henrietta Jackson (Whino; Yours, Mine, Ours collective) was commissioned to design the space, which features red and emerald pendant lights strewn across exposed brick, with a mix of bar and booth seating.

A bottomless brunch lasts for two hours, and comes in at $50 per person. There’s southern-style chicken and waffles and, of course, Bloody Marys, which will keep on coming until you yell “stop”.

On a quest to master the perfect Bloody Mary, McGlone got together with the team from Sydney’s Westmont Pickles to design the base, which combines pickle brine and freshly pressed tomato juice laced with cayenne pepper. “It’s saucy, spicy and exactly what I’d crave after a big night,” says McGlone.

Other drinks include The Country Time (lemonade infused with cardamom and a shot of Melbourne Moonshine); The Southern Charm (sweet tea with a dose of Buffalo Trace Kentucky Bourbon) and Arnaldo (half house-made lemonade, half sweet tea with a splosh of Tromba Tequila).

Belles Hot Chicken is slated to open at 7 Steam Mill Lane in Darling Square, Haymarket, on the week starting April 16.