Time to Celebrate: the Biennale of Sydney Comes of Age

Twenty-one years after it began, the Biennale of Sydney has revealed its 2018 line-up. And there’s plenty of reasons to party. 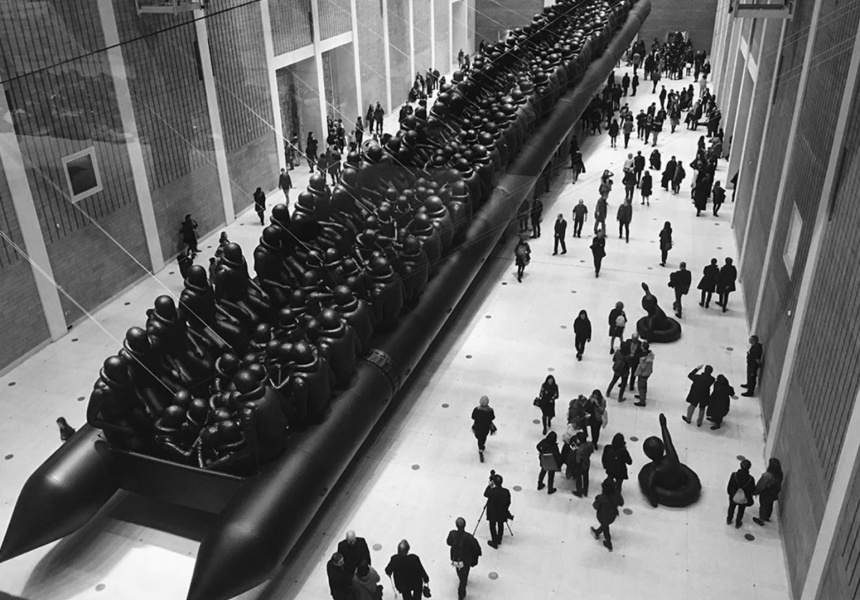 Yasmin Smith speaks confidently and engagingly about the installation she’ll create for the upcoming Biennale of Sydney, but there is one question that leaves her momentarily lost for words: how does it feel to be among the 70 artists selected in the 2018 line-up?

The young Parramatta-based ceramicist falls quiet as she searches for words. Such is the prestige of being invited to join the host of celebrated and emerging Australian and international artists.

“It’s incredible,” she says finally. “I guess it sort of makes me feel validated. It’s excellent to be able to work in my hometown and produce work that delves into our history and ecology and culture. In terms of my career there are a lot more experienced artists so it builds my confidence as well,” says Smith, who is repped by The Commercial in Redfern.

The full line-up for the 2018 Biennale of Sydney has now been announced, with artistic director Mami Kataoka revealing solo artists and collectives from the six continents of Africa, Asia, Australia, North and South America and Europe will take part in the free three-month exhibition kicking off in March.

There are some undisputed heavy-hitters in the group, chief among them is celebrated Chinese political dissident Ai Weiwei, who will be presenting two pieces including his powerful work Law of the Journey at Cockatoo Island. The huge 60-metre inflatable boat is filled with 250 oversized figures and constructed from the material used to build the vessels that ferry refugees from Turkey to Greece.

“Ai Weiwei is known for work that brings massive scale and this work really makes you feel the reality of the scale,” says Kataoka. Weiwei will take part in a personal and political discussion with Kataoka at the Sydney Opera House on the opening night of the Biennale; which will be followed by the Sydney premiere of his Oscar-nominated documentary Human Flow that explores the scale and impact of forced migration.

In revealing her line-up, Kataoka explained that: “The artists have been chosen to offer a panoramic view of how opposing interpretations can come together in a state of equilibrium. The history of the people of Sydney collectively reflects the history of the world in the 20th century, in particular the movements and migration of people and cultures away from conflict.”

Kataoka is the chief curator of the Mori Art Museum in Tokyo and, astonishingly, the first Biennale director from Asia. Of the artists selected for the Biennale, 27 of them hail from the content, while 21 per cent are Australian. There’s also an even split between male and female artists.

The 2018 Biennale will be this city’s 21st, marking 45 years since it first began as part of the celebrations for the opening of the Sydney Opera House in 1973. The Opera House is one of the seven venues presenting work, alongside Art Gallery NSW, Carriageworks, Museum of Contemporary Art Australia, Cockatoo Island, Artspace and 4A Centre for Contemporary Asian Art.

The broad range of works includes Hong Kong’s 2017 Venice Biennale video artwork by Samson Young, We Are the World, alongside a new commission; Lebanese-born Sydney artist Khaled Sabsabi’s multimedia installation inspired by visiting Sufi shrines in India; and a large clay mountain sculpture built using a 3D printer by Scotland’s Anya Gallaccio – a challenge to the idea of sculpture making.

The youngest artist in the group is 26-year-old Ami Inoue, a Japanese hunter whose work addresses being forced to reconsider the way she communicated with her hunter grandfather, who ceased hunting following the Fukushima nuclear disaster in 2011.

In an age where people are increasingly communicating digitally rather than face-to-face, there’s a noticeable level of direct engagement with communities in the artworks, such as Denmark’s Jacob Kirkegaard who has built a simple wall that contains sounds recorded from Jerusalem, with viewers encouraged to consider all sides (literally and figuratively); while on January 28 Japanese theatre director Akira Takayama is inviting people to sing a song or recite a poem of ancestral symbolism that he will record and adapt to film.

Smith, too, is encouraging community engagement with her work, an installation to be built in situ on Cockatoo Island from materials harvested by the public from Parramatta River, including wood and salts. “I try to understand places I live and work in through the elemental nature of the environment,” she says.

Her work will explore the long history of abuse Parramatta River has suffered since colonisation – through industrialisation and urbanisation – which have changed the foreshore line but also the makeup of the vegetation and river itself. The objects will be fired in a salt kiln using a salt glaze; whilst her own objects will be glazed with mangrove ash.

“It will be a beautiful installation,” says Kataoka. “It’s all very exciting. I can’t wait to show everything in reality in three month’s time.”