He doesn’t get out much these days: he’s busy creating a dining hub in Richmond and has developed a love of interior design. Hilary McNevin talks to newcomer Ryan Flaherty, chef and owner of Mr Jennings. 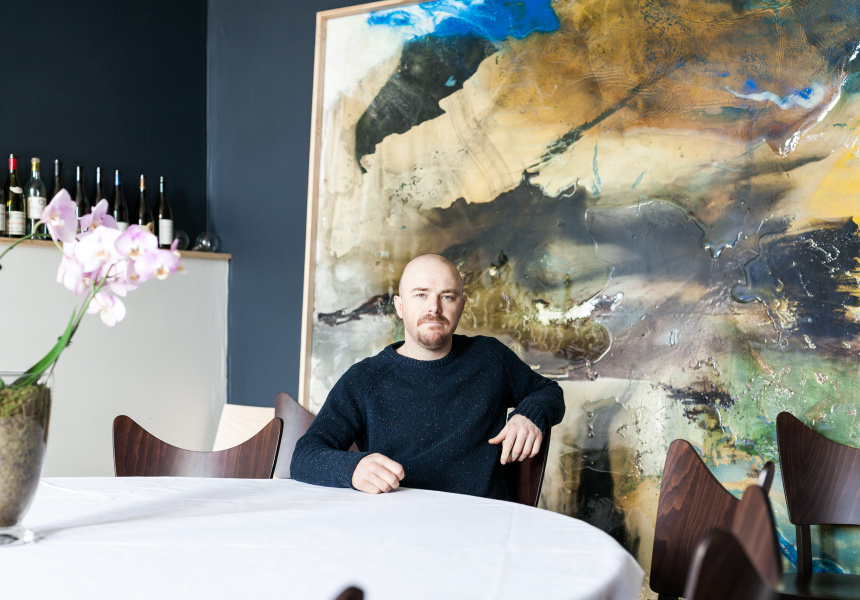 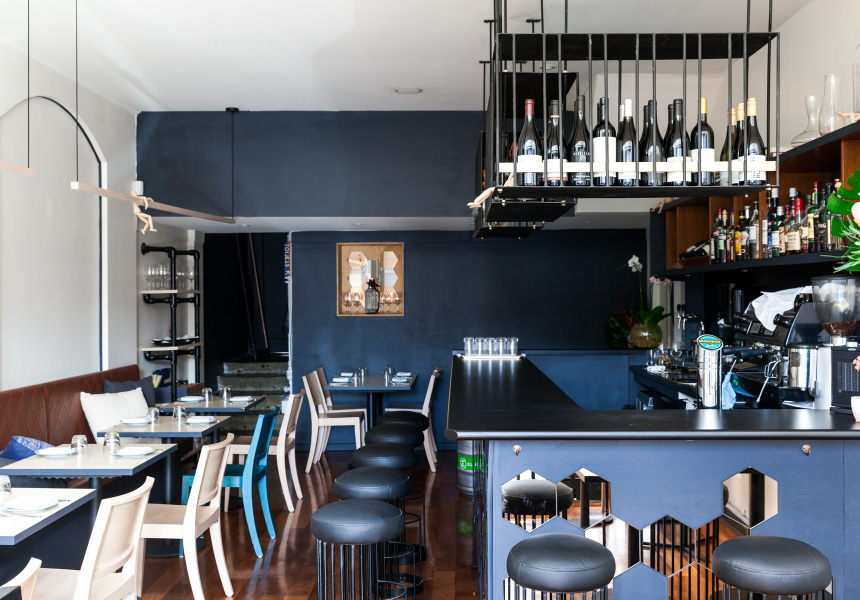 You could blink and miss the front of Mr Jennings, chef Ryan Flaherty’s restaurant and one of the most interesting openings of last year. Its small shopfront sits on a stretch of Bridge Road in Richmond, where more and more retail spaces hang “for lease” signs. Inside, you’re met with statement art pieces, blonde wood furnishings … and a handyman standing on the bar drilling a hole in the ceiling. It’s Tuesday and the restaurant is closed.

“I’m constantly working on the place,” says Flaherty, as we sit down at his table in the kitchen – the Chef’s Table – that he is palpably excited about. More on that soon. Being a small-business owner has exposed Flaherty to the necessity of doing just about everything himself. His love of interior design is an unexpected result of this. “I love everything about it and am often up at midnight Googling chairs, crockery and cutlery.”

Flaherty opened Mr Jennings just over a year ago as “A means of survival,” he says. At the time he found himself without a job after leaving Northcote’s The Estelle, where he had been head chef and part owner.

He doesn’t elaborate on that chapter in Northcote other than to say dipping his toe into business ownership gave him the courage (or the craziness) to take the full plunge. “I could never do this again,” he says, acknowledging that going solo has been hard, but he says he is starting to find it rewarding.

The rewards are coming in the plans he’s making. The 35 seats in the dining room are served a menu of what he describes as “bistro food” – puffed veal tendons with miso cream; his version of the “dagwood dog” with house-made boudin blanc; and the popular frozen kangaroo carpaccio that had Melbourne diners wondering why we hadn’t thinly sliced frozen kangaroo fillet before now.

But Flaherty’s next step is the Kitchen Table that seats four to six diners at the coalface of the kitchen’s pass. Starting on September 4, the Kitchen Table will be open on Friday and Saturday nights only and feature 10 to 12 courses. The first year will be invitation only, for “all the regulars and people who have supported me”.

This table explains much of the Googling of tableware as, at $195 per person for food only, Flaherty is upping the ante. “It’s fine dining here,” he says, patting the table, “And bistro out there,” pointing to the dining room. “I want this table to be one of the best restaurant tables in the country.” He’s also got some of the crockery covered, asking for donations of plates from chef’s who have inspired him, “George Calombaris, Andrew McConnell, Heston Blumenthal, have all given me plates for the table.”

With his bistro out front, a private dining room upstairs, the Chef’s Table and a back courtyard that’s still a year or so away, Flaherty is “putting it all here under one roof”, and he’s loving it. Once you understand his background, it makes sense why he’s learned to demand the best from himself.

Flaherty arrived in Melbourne from Perth a decade ago as an ambitious, qualified chef. Stints at Stokehouse and Reserve followed. While he was cooking in Melbourne, he was emailing The Fat Duck in Bray “every other week”, asking for a “stage” (working for experience rather than income). They eventually listened and Flaherty headed to the UK, sticking it out until he was offered a permanent role in pastry. He stayed at The Fat Duck for two years but decided he wanted to learn another language.

It was either French or Spanish, and Flaherty went to San Sebastian in Spain, with little money and not much more than an “hola” to his vocabulary. He says, “I had a gin and tonic in every Pintxos bar in town until I found one I loved and I hassled them for a job.”

Flaherty started a couple of days a week. His employers knew the team at Arzak – which had three Michellins – and organised some time for him there. “I used to spend my days off in the lab at Arzak,” he says, “and they asked me if I wanted to go to El Bulli for a season. I was keen. They said, ‘We told them you speak Spanish, so take more classes’.”

Flaherty put his head down and kept his mouth shut at the legendary El Bulli, which closed in 2012. “You do the same thing everyday and don’t make a fuss, just do it. They see you just get on with it and then they let you do other things, I spoke the language by then, too, and had three-star Michelin experience. It helped.”

Working at two of the world’s best restaurants isn’t taken for granted by Flaherty. “If you’d told me when I was in Perth, that I would work at Fat Duck and El Bulli, I would have said no way. It’s surreal.”

But the lessons are very real and he uses them daily. “The beauty of El Bulli was the thought that went into everything,” he says. “The systems were so refined.”

“El Bulli was and is the best restaurant in the world,” he says, “it always will be to me, but the best food I’ve ever eaten was at The Duck. I had in my head it was going to be whimsical and experimental, but it’s so stemmed in technique, thoughtfulness and research.”

He doesn’t want a second business, just different elements of the one business under one roof and he’s happy to do the hard yards surrounded by the right people.

“Hardworking and humble is what I’m looking for,” he says. “You hope you get that with whoever you work with.” He says he feels it’s coming together at the moment and hopes more good food operators open up on Bridge Road. That could only be good for Richmond, but we get the feeling Mr Jennings and Ryan Flaherty will be just fine.