A professional skateboarder and a snowboarder from age 14, Dave Verheul never imagined becoming a chef. But a sporting accident saw his life take a dramatic turn and led him to open acclaimed Carlton diner Town Mouse, and hone his signature style: flavour first, no gimmicks. 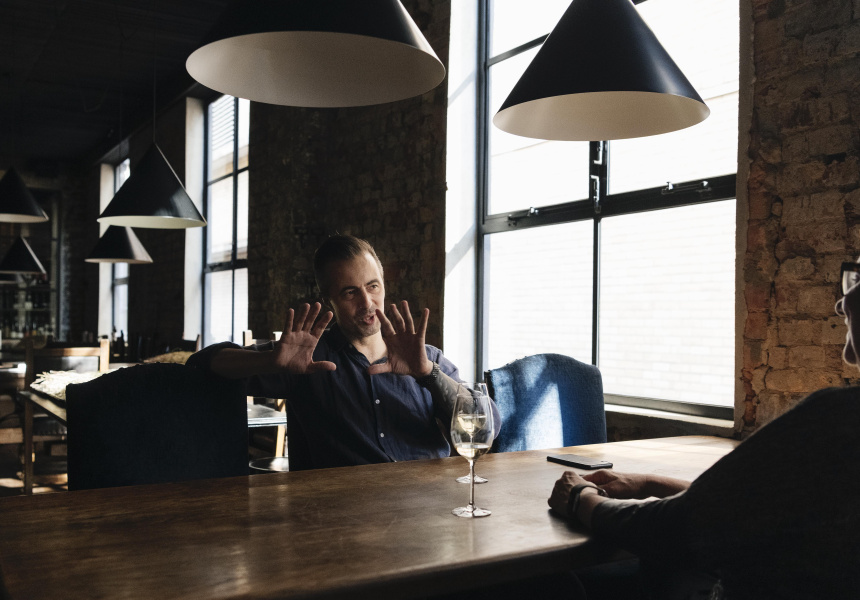 It was 2013, and a restaurant called Town Mouse had just opened in my neighbourhood. Nothing had been written about it yet (that was soon to change), but I saw oysters on the menu so I got myself there, asked for a table for one and ordered half a dozen. They arrived just shucked – all briny and plump – alongside a chardonnay vinegar sorbet, its cold, sweet acid lifting what were already perfect. It was something else. And so, I began my love affair with the Carlton eatery that wound up winning accolades-galore before closing its doors for bigger things five years later.

In the meantime, what business partners Christian McCabe, his sister Amber McCabe, her husband Jay Comesky and chef Dave Verheul created on Drummond Street soon spread to the CBD. In 2015, along with Christian McCabe, Verheul opened Embla, a relaxed wine bar with natural wine leanings and a sharp, seasonal menu. That was followed last year by Lesa, Embla’s more formal sibling upstairs.

But it was Town Mouse that grabbed my – and most of Melbourne’s – attention. Verheul’s approach was fresh and intriguing, using simple ingredients elevated through technique.

A dish of slow-roast red cabbage, prune, parmesan and apple couldn’t leave the menu. The calamari – cooked sous vide (French for “under vacuum”; the practice of vacuum-sealing raw food in plastic and cooking it at a precise temperature in water), then frozen and shaved into fine ribbons – served with fermented apple juice, oyster cream, salted cucumber and dill oil changed our city’s expectation when it came to what we wanted from seafood.

How did a young chef from the New Zealand town of Mosgiel, a satellite town to Dunedin and the second most southern city in the world, manage to get us so thoroughly hooked?

“I look for balance,” Verheul says. “Acidity, strength, weakness, brightness and texture, all in balance. That calamari dish at the Mouse was one of my favourite things I ever did – the beacon of how good it is to be here cooking. It was really liberating. It was a new platform.”

But Verheul almost didn’t make it to that platform. He never imagined becoming a chef, but he did come from a world where dedication is everything, which set the tone for the strong work ethic he has now.

“I was sponsored as a skateboarder and a snowboarder from the age of 14,” Verheul says. “It’s a weird way to grow up. You’re a walking billboard. And I didn’t need to buy clothes until I was 22.”

Skateboarding since he was three and snowboarding from age 11, it was a skateboarding accident at 22 that saw Verheul’s life take a dramatic turn. He tore every ligament in his right knee, and needed six months of rehabilitation. A lifetime of training and sponsorship (and that free wardrobe) disappeared.

He didn’t know what to do next; cheffing didn’t rate a thought. “There was no food culture where I grew up,” Verheul says. “So being a chef didn’t occur to me at all. I’m the oldest of four kids, and mum’s cooking was more about functionality back then. Although she was a good cook, she’s a great cook now. She got more into it as we grew up and [now] has a great garden and kitchen in Central Otago.”

Verheul began a degree in psychology at Otago University in Dunedin, but he didn’t enjoy it. What he did like was cooking for others.

“I’d come home from uni and cook for my flatmates. Not well, but I’d just cook what were normal, reasonably terrible versions of popular pasta dishes,” he says. “Even though I’ve got Dutch heritage, I think I’ve always on some level wanted to cook like an old Italian nonna. And I liked the generosity of cooking for people.

During his time at uni, a mate with a Lebanese restaurant offered Verheul work washing dishes. “A few weeks into work they said they wanted to teach me how to cook. As soon as I started, the energy got me in. I loved it,” he says. “The main thing I learnt there was that I’d found something that I really loved, and that I had so many questions that I wanted to find answers for.”

Verheul went looking for answers in London, where he stayed for two and a half years working at The Savoy Grill – owned by big-name-chefs Gordon Ramsay and Marcus Wareing – and cooked under Kiwi head chef Josh Emett. It was long hours at an achingly high standard and at that time, also meant the now-notoriously brutal restaurant culture of bullying and abuse was commonplace.

“You can’t wax over it anymore,” Verheul says when I ask whether he experienced harsh treatment working in the UK. “It’s a horrendous culture. I’ve worked in kitchens where there’s been bullying. There’s no longevity in unrealistic expectations of that method of work … It was Michelin-standard but you’d do 250 people on a Saturday night, with a brigade of 18 chefs. It was huge.”

After London, the chef headed to Sydney to work at Bentley under chef Brent Savage. A chef he still considers a friend and mentor. “We’re still good mates,” he says.

By this time Verheul had met Christian McCabe (“through Kiwi connections”), who owned popular Wellington bar and restaurant Matterhorn – winner of NZ Bartender Magazine’s Bar of the Year three times in a row and Cuisine magazine Restaurant of the Year in 2008 – and the pair clicked over a similar work ethic and a drive to do things well.

When McCabe sold the restaurant to move to Melbourne, the pair stayed in touch and when McCabe found the site for Town Mouse, he gave Verheul a call. “I flew over for about six hours and had a look and the interior had been semi-demolished. I couldn’t picture the venue but knew I wanted to work with Christian, he’s great front-of-house. I’m not great with people, I’m not the front guy – and that worked out.”

“I never thought it would go where it went to, but I’m happy that it did,” he says. “I never thought about the attention, but I didn’t want to make a mess of it. That was all I was thinking.”

A couple of years into Town Mouse, Verheul sat on a panel that I moderated. He was reluctant to be a part of it – he readily admits media attention takes a toll on him – but we did five sessions over five weeks and each week, more and more, he embraced the role that a chef can have of guiding and advising industry.

“We’d had attention with the Matterhorn, but coming here … the media attention was so much more on us. I’m thoroughly thankful for the attention we got at Town Mouse, but I didn’t know how to handle any of it. I didn’t how to communicate and deal with the kind of scrutiny it put us under. You want to live up to people’s expectations, but I wasn’t mature enough to deal with that kind of pressure so quickly.

“I got angry for a while. You get reviewed once a year at a place like Matterhorn but here it was constant. I don’t want to cruise and do nothing, and while I always need to try and find ways to do things better or learn something new, the pressure was tough.”

But Verheul threw himself into the work and dishes – including the calamari, the cabbage and the oysters – continued to draw attention, speaking to the Melbourne dining scene’s hunger for new experiences. “It’s an extremely interested audience that has lots to do with the mixed ethnicities and cultures. The dining public here are super-educated.”

That’s not to say his food hasn’t evolved over the years. He’s kept his audience sated at Embla maintaining as clever an approach, if a little more pared back, as during the Town Mouse days. Pickled cucumbers with creamed feta heralded Embla’s simpler menu, and charred broccoli with a nutty sunflower-seed miso was quickly considered to be The New Cabbage Dish. The roast chicken turned heads with its whole cloves of garlic – it still pops up on Embla’s much-loved Sunday lunch menu every now and then.

“It’s about flavour. It has to be tasty,” Verheul says. “Never gimmick over substance; it doesn’t mean anything. I’ve got no idea how to describe my food, I just want it to be delicious.”

Lesa allows the chef to flex his creative muscle even further. The level-one dining room opened with dishes including chicken porridge with black fermented chestnuts, and a pork chop with a kale crisp and buckwheat miso. Flavour at the front, and texture and comfort coming up very quickly behind; it’s Verheul’s signature. But his vision and love for his craft is wrapped up simply in his desire to always grow.

“I love the creative side to cooking,” he says. “And I love making people happy.”