Dining at The Fat Duck

Right now, The Fat Duck Melbourne is the world’s most difficult-to-get-into restaurant. So what’s it like to spend six hours in its rarified air? 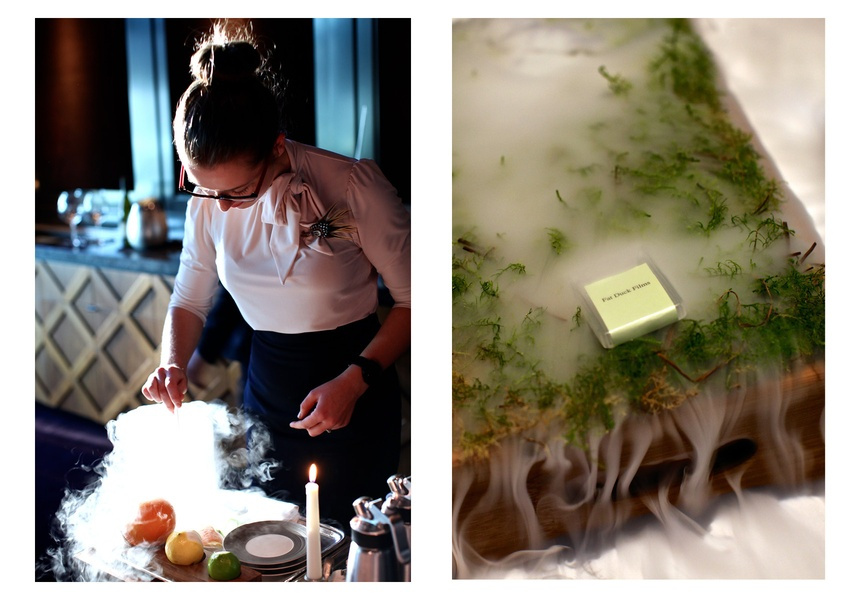 At the end of a polished marble corridor on the third floor of Crown Towers there is a small concession stand. It sells bathers and towels, goggles and pool toys.
In the wall next to the stand there is a floor-to-ceiling door. It has no handle, and nothing about it suggests access to the public but for two small frames. One holds a menu. The other, a metal plaque with a coat of arms featuring a duck with a magnifying glass and a scroll which reads, “question everything”.

As kids in goggles and elderly bathrobe-d gentlemen move to and from the hotel pool, those with bookings wait for someone to grant access to the world’s most celebrated dining experience. When a smiling host appears, the door is electronically unlocked and these lucky few make their way up a dark, gently sloping corridor. At the end of the corridor, another door, and The Fat Duck.

Strictly speaking, The Fat Duck Melbourne. But given the entire operation has been relocated from the restaurant’s UK home, it’s as close to the genuine article as most of us are likely to get. And that’s bearing in mind that most of us won’t even get this far.

The words “entire operation” don’t do justice to the scale of the move. When The Fat Duck staff relocated to Australia, it took everything. Pots and pans, rotary evaporators and dehydrators, centrifuges and crockery. Even the cutlery drawers were emptied and packed for transport.

At home in Bray, The Fat Duck is a small restaurant. A tiny dining room, with ceilings low enough that people over six foot need to stoop, and tiny kitchen, to the point where pans are kept in a shed outside, and most food prep is done in a development kitchen across the road.

At its temporary Melbourne home, space is not an issue. The Fat Duck might not allow guests to peek behind the wizard’s curtain, but they can assume that in the Crown kitchen, chefs aren’t nipping across the road to grab a few extra gold watches for the mock turtle soup.

Aside from a few quirks, the dining room looks and feels like that of many top-end restaurants. Tablecloths are white and the carpet is heavy and reassuring. So is the furniture. This is a good thing, as once seated you will spend the better part of five hours in these chairs. The distance between tables is vast, discouraging rubbernecking or eavesdropping on fellow guests. There is no music. In short, there is very little to distract from what is about to happen in front of you.

What’s about to happen is The Fat Duck Tasting Menu, all 16 items of it, up to and including the Savoury Lollies, Mad Hatter’s Tea Party, egg-and-bacon ice cream and Sound of the Sea.

For devout fans, the run of courses will not offer many surprises. But even those fans, unless they had the foresight to take notes from the menu outside, don’t know exactly what’s coming until each course arrives. As they leave, each guest gets to take home a wax-sealed menu, but for the duration of the meal they’re in the staff’s hands.

With the exception of two locals, all employees have been imported from Bray. Female waiters are in matched shirts and skirts, though the gents seem to have a bit of leeway in their choice of tie. All of them do the establishment proud. Polite without being overly formal, and deeply knowledgeable without distracting with too much information.

These experienced hands ease you in to the menu with a first dish simply described as aerated beetroot. What arrives on your plate is a confection the size and consistency of a small macaron, except as the beetroot and horseradish explodes in your mouth in one satisfying crunch, it’s clear this is unlike any macaron you’ve ever experienced.

Following the beetroot amuse-bouche, a waiter appears with a trolley containing three small fire extinguisher-type contraptions and what can only be described as a cauldron of liquid nitrogen. Guests are asked if they would prefer a vodka lime and soda, Campari, or gin and tonic, and one by one the waiter produces a meringue for everyone at the table. There’s no dilly dallying with this course. After being plunged in to minus 196-°C nitrogen, the meringues are to be eaten immediately. I opt for the Campari, and the shock of the cold mixed with the bitter orange overtakes everything, until I exhale a few plumes of vapour out of my nose.

Looking around during a pause between courses, Fat Duck diners may find themselves drawn to the wall that has been given over to an unfinished puzzle. It features an artistic representation of the restaurant’s journey from Bray to Melbourne, and will be completed with the help of every guest. The other side of the room features windows which hit the ceiling and provide views of high-roller-toting helicopters coming in over the Yarra. Diners may also, of course, contemplate their fellow guests.

Who else is here? Well, Heston Blumenthal, for a start, sharing a table on our visit with MONA’s David Walsh. Apart from Walsh, the boss and veteran food writer Rita Erlich, there are no recognisable identities among the diners when we visit, giving credence to the official line that all bookings (apart from staff, family and the odd media type) were won in the ballot.

Broadsheet shares a six-seat table with a handful of other food journalists and Blumenthal’s long-time publicist Monica Brown, an entertaining Scot who helped the restaurant turn from regional curio into global phenomenon. Taking in the wall-filling installation, we learn that Blumenthal hates his portrayal, having not had a chance to vet the painting before it was turned into a puzzle. When he drops by our table to say hello toward the end of the meal, he merely rolls his eyes when it’s mentioned, making a crack about the cape and star-spangled pyjama bottoms.

We match wines, of which, perhaps mercifully, there are only seven. The Fat Duck may push the limits of gastronomy, but has a clear understanding of alcohol’s ability to work within these limits. A glass for all 14 courses, regardless of how great they are, would push a little beyond.

Matched wine options start at $200 and apparently go up to $1000, and young sommelier Loic Avril has created an excellent local list of mostly Victorian wines, having put in a lot of time at Yarra and King Valley vineyards. Standouts include a 2004 Seppelt sparkling shiraz and Yarra Yering’s excellent 2005 Dry Red No.1, which accompanies the last savoury course; lamb with cucumber, green pepper, caviar oil and caraway.

Yes, a meal at The Fat Duck is expensive. So are front row seats at a Prince concert, courtside tickets to the Wimbledon final and visiting Barcelona to walk through the Sagrada Familia. Every craft has its masters, those who push the boundaries of what’s possible regardless of cost. Sure, paying half a grand to experience this level of artistry is not important to everyone, let alone attainable. But neither is spending that much on a flight to Bali to lie on a beach. If food is your consuming passion, then the value-for-money argument is a short one.

That said, not every course is blow-your-hair-back astounding. A red cabbage gazpacho with mustard ice cream arrives before the Savory Lollies and is merely excellent, and the lamb is only an amazingly good version of a dish you could expect to find at another great restaurant.

In a way, you welcome these “normal” dishes between the overwhelming artistry of those you’ve seen on Masterchef, but they make you work. Even if you’re happy to pay, $525 plus whatever you spend on drinks is a huge amount of money. It’s hard to forget that, just like it’s hard to forget how many people were bitterly disappointed they missed out due to simple dumb luck. You become conscious of savouring every mouthful, trying to make sure each new taste is seared in your memory. With some dishes, like the Golden Gaytime “ice cream” which ends the Savoury Lollies and is made with fig gel and chicken liver parfait, or the Mad Hatter’s Tea Party and its gold watch dissolving in a Mock Turtle Soup, this is not a problem. Others, such as the roast marron with shiitake, kelp confit and sea lettuce, are almost too considered. If you don’t force yourself to appreciate them, it’s easy to get swept up in a particularly interesting conversation at the table, take a few more mouthfuls and find your plate clean, and another dish you’ll never eat again is gone.

If there’s a disappointment in the experience, it’s this. Blumenthal has said he always wanted the atmosphere in the dining room and the mood of the customers to be anything but serious. But with so much invested in enjoying yourself, you’re caught between the proprietor urging you to have fun, and your own need to take it completely seriously. Every dish on the menu takes days to make – not one can be cooked from scratch the day it will be served. It’s hard to mess around with food like this.

Botrytis Cinera, the first of the desserts, is at first glance a bunch of beautifully coloured grapes. It’s during this course that Blumenthal stops by our table, explaining that to create each grape, he investigated the botrytis cinera fungus at a molecular level, looking for other flavours (such as blue cheese) where similar molecules appeared.

More examples of the consideration and effort that has gone in to these dishes appear each time a new one arrives at the table.

You’d think that Sound of the Sea, with its seaweed foam, tapioca starch and fried anchovy “sand” forming a bed for the kingfish, abalone and butterfish sashimi, would be impressive enough. Then you learn the dish’s soundtrack, which you play on a pair of headphones pulled from a large shell, was remixed by a member of Pink Floyd. And that the actual sand sitting under the glass “plate” isn’t local sand, but Venezuelan. When first experimenting with how the dish would be presented, the team found that local sand didn’t look enough like sand when taken away from the beach, so sandier looking sand needed to be found.

As the meal progresses, the staff begin to mess with you. It’s an extremely professional level of messing, and they would be acutely aware of which tables to try it on and which not to, but when you’re five drinks in and grappling with questions of sandy-looking sand, they know they can crack a few gags and get away with it.

Four hours pass and dishes are still coming, but despite the amount we’ve consumed, nobody feels uncomfortably stuffed. Of the 16 items on the menu, two are aperitifs eaten in one bite, one is a handful of whisky gums, and the last is a lolly bag to take home.

I don’t eat again that day, and think twice about having breakfast the next morning. Not because it wouldn’t have been possible to eat any more, but because I wanted to prolong the holiday from the world of everyday, attainable food as long as possible. The Fat Duck might have transformed our understanding of food on a global level, but once you’ve experienced the real thing, you realise they’re playing on a different field to the rest of us. And you know you’ll never run on to that field again.

Broadsheet dined as a guest of The Fat Duck.