Shannon Martinez and Ian Curley to Open Lona Misa, a Vegan and Vegetarian Diner in South Yarra, Next Month

Two hospitality heavyweights – behind Smith & Daughters and French Saloon, respectively – will collide at this 90-seat all-day diner within the new Ovolo hotel. The menu will draw on Martinez’s Spanish heritage and Curley’s European bistro experience. And in Martinez’s words, her usual style will be getting “a bit of [a] nip-tuck”. Shannon Martinez is heading south of the river.

The plant-based powerhouse behind Fitzroy’s vegan spots Smith & Daughters and Smith & Deli is set to open Lona Misa, a vegan and vegetarian diner in South Yarra, next month.

It’s a collaboration with Ian Curley, the lauded British-born, Melbourne-based chef and hospitality consultant – and former European Group executive chef – who’s also behind Kirk’s Wine Bar and French Saloon, which recently transitioned from a restaurant to an events space.

“It’s funny, I’ve known Curley a long time, and we’ve both always refused to come across the river,” Martinez said in a statement.

“Melbourne hospitality will get what I mean when I say he is 100 per cent south side, I’m 100 per cent north side. Finally, the meeting of north and south – it’s going to be something else.”

The pair’s 90-seat all-day diner will be within Ovolo South Yarra, a new designer hotel on the corner of Toorak Road and Chapel Street. It’ll morph from daytime cafe to a wine bar at night, with Martinez and Curley working with local farmers and producers to craft a produce-driven, heavily vegan and vegetarian menu.

As creative culinary partners, Martinez will spotlight her Spanish heritage while Curley will bring his comprehensive European bistro and fine-dining experience to the table. In Martinez’s words, her usual style will be getting “a bit of [a] nip-tuck”.

Drinks-wise, there’ll be boundary-pushing wines – with a natural, organic and carbon-neutral focus – from Aussie producers, season-driven cocktails and sodas made in-house.

The announcement of Lona Misa is particularly triumphant for Martinez, who was last year diagnosed with breast cancer, undergoing chemotherapy and taking part in an experimental immunotherapy trial.

Lona Misa is slated to open at 230 Toorak Road, South Yarra – within the Ovolo hotel – in April. 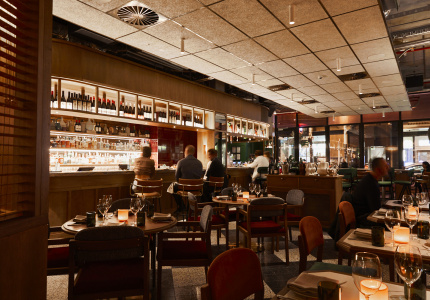