“My whole life rests on my tastebuds, but I’m trying to think of it as just changed for a bit, not that I’ve lost everything. Super acidic things are working: I’m craving South American, Thai food, limes and vinegars.” 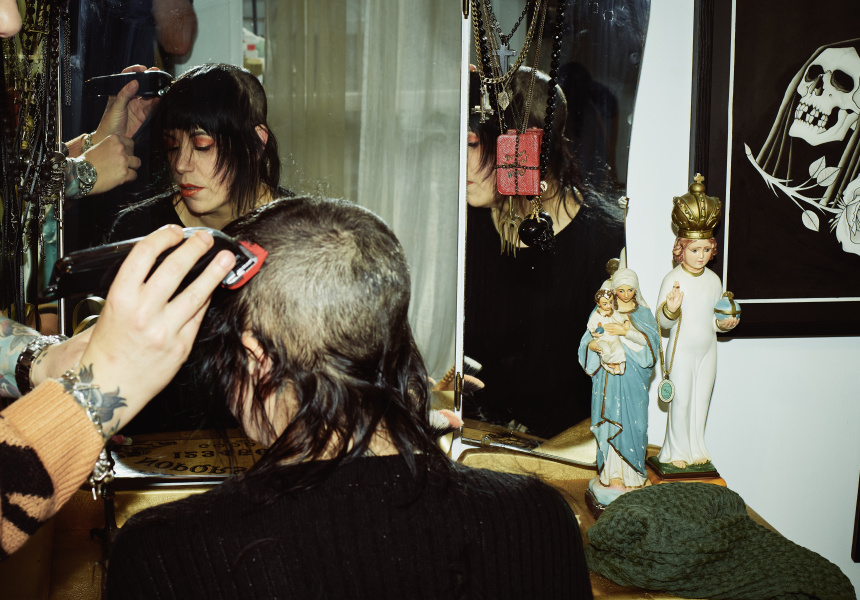 If you’re a chef and you get cancer, you worry about dying, sure, but you also worry about your tastebuds. “My palate has changed completely,” says Shannon Martinez. “You would not want to eat the tomato sandwich I just made. I was sprinkling on salt like you’d put parmesan on pasta and I could still barely taste it. Everything is super bland.”

Martinez, the owner and chef of Fitzroy vegan restaurants Smith & Daughters and Smith & Deli discovered in July she has triple-negative breast cancer. “It’s a tricky bastard,” she says. “It’s the least common breast cancer and the hardest to treat.”

She started chemotherapy at the Peter MacCallum Cancer Centre within a fortnight and is also taking part in an experimental immunotherapy trial. Surgery will follow, but the extent of it depends on how much the treatment shrinks the tumour. “I hope I can keep my breasts, but I’ll do a double mastectomy if I have to,” she says.

I’ve caught Shannon Martinez, 38, on a good day, when she’s feeling strong and sharp. She recently moved house, to a suburb with plenty of green, the river nearby, even horses and kangaroos. The iso walks would be nice, if a compromised immune system wasn’t stopping her from leaving the house. “The treatment runs in cycles,” she says. “I have two days a week that are flat. Chemo makes you such a scatterbrain and you are so tired.”

She revealed her cancer on Instagram three days ago, with a photo of her long black hair being shaved off. The response overwhelmed her. There were more than 1150 comments, many expressing appreciation for her no-bullshit power-on attitude and her #onehandedchef Instagram stories recipes, which cheerfully wing their way through I-can’t-believe-it’s-not-beef vegan stovetop wonders.

“People say I make them laugh, that the videos are getting them through isolation,” she says. “You lose track of the effect you have on people – the things you do become your job, your habit – but reading those comments made me realise that I impact people.”

She’s not planning to let cancer stop the impact. “When I learned I had cancer, my first thought was, ‘Are you fucking joking? This year? How am I going to keep the businesses open if I can’t be present, fighting for hospitality?’ It was heavy. I was really scared at first.” She kept the diagnosis under wraps for two months. “There’s so much shit in the world right now, we don’t need another bad story,” she says. “But once I started losing my hair – it was on the chopping board, my pillow, it was gross and depressing – I found it hard to hide and lying didn’t sit right with me.”

She’d also had time to process the diagnosis. “I decided to grab cancer by the balls and attack it,” she says. “The minute we started shaving my head, I was so much happier because I was in control, shedding the old, starting the new. Nothing is going to be the same having gone through this. My life is affected forever. This is the new me, whatever happens.”

And there is a lot happening. With trusted staff keeping the restaurants’ takeaway businesses ticking along, Martinez is using her good days to write a “cooking for chemo” book and a series of superhero comics called The Adventures of Chuck and Her Bubble of Trouble. Martinez is Chuck; the bubble is her all-girl squad. Together they combat the demons that hang out with cancer – a fear in the form of thousands of spiders scrabbling up her driveway, for example. “It’s for teenagers, young adults, or young-old adults like me that want to be empowered and have something to laugh at during a shit time,” she says.

As soon as she began chemo, her relationship with food changed. “My mouth feels like it’s burnt and everything tastes different, metallic,” she says. “Wine is disgusting, which is a shame. Chocolate tastes horrible, almost rancid.”

Rather than finding it devastating, Martinez is viewing her predicament with curiosity. “My whole life rests on my tastebuds, but I’m trying to think of it as just changed for a bit, not that I’ve lost everything,” she says. “Super acidic things are working: I’m craving South American, Thai food, limes and vinegars. Fatty things don’t feel nice. Broths and slippery things like noodles are good because your mouth hurts, your teeth hurt.”

Martinez has experience cooking for chemo – her mum has had both breast and pancreatic cancer. At the moment, mother and daughter have matching ports in their chests, valves the size of a 20-cent piece that allow medicine to be directly injected into their veins. “It’s close to home for us,” Martinez says. “I’ve watched mum lose a dramatic amount of weight and I tried to help her with small portions of nutritious, calorie-dense food.”

The recipes she’s coming up with now are designed to appeal to chemo-skewed tastebuds but also to be easy to cook and eat. “I’m addressing the emotional side too,” she says. “It’s to help people make the most of their good days, and to help them get something in the freezer for days when they feel like shit.”

Martinez is famous for exuberant vegan food, but she’s not vegan herself. Not everything in this book will be plant-based. “The vast majority of the book will be vegan, but cancer can change the way people think about food,” she says, thinking of her recent taste for restorative broths “like Jewish penicillin and Chinese medicinal soup”. Vegans aren’t always kind about meaty transgressions – is she worried? “I might get a bit of grief but I don’t really care,” she says. “Hopefully, it’s a time of no judgement.”

Turning a terrible blow into a period of creativity is simply “what I need to do”, says Martinez, who was a classical violinist and rock bassist before she became a chef. “It’s the way my mind works. If I’m not in a positive mindset, I find it hard to deal with whatever the situation is.”

She reckons the same approach can be applied to non-cancerous troubles. “Right now, the world is really shit, so wherever humanly possible I think we should focus on the small victories,” she says. “In normal circumstances, they might be so tiny that they wouldn’t be enough to celebrate. These days they are. Even with cancer, even if it’s just getting the salt right on a tomato sandwich, I’m planning to focus on the positives.”

Pre-order The Adventures of Chuck and Her Bubble of Trouble here. All proceeds will go to the Peter MacCallum Cancer Foundation.