Donovans is Back in Business Since Kevin and Gail Donovan removed the hoardings outside their 20-year-old restaurant this morning, cars flying along the St Kilda Esplanade haven't stopped tooting, and the phone has rung 70 or 80 times. Donovans is back.

The long-running restaurant was evacuated last August, after embers from a chargrill flew into the ceiling and started a fire. The kitchen, parts of the bar and private dining room were lost, to the tune of $2 million. "It took the forensic engineer three weeks to prepare his report on the extent of the damage,” Kevin says. “Every place he looked, we realised smoke damage got in here, or water got in there."

But for all this heartache, there was a silver lining. Donovans was able to close for only its second renovation ever, and the improvements are many. "We had a restaurant with a really gorgeous brand, but it was 20 years old,” Gail says.

Pre-fire Donovans never really showed its age, though. The duo has always been dedicated to creating a home-like atmosphere, right down to the actual family photos hung on the back wall. Every six months, Gail and her friend Darryl Bell did a themed makeover, replacing the dozens of knick-knacks decorating the restaurant. For the next six months, it's all about bikes, from the Vespa cutout at the front entrance, to the vintage Tour De France memorabilia in the male toilets. “We're back on our bike – that's the theme,” Gail says.

Elsewhere, there's new ceilings, a new timber deck, and the tinted plates and glasses have been swapped for more neutral pieces. In the kitchen, head chefs Adam Draper and Emma D'Alessandro oversaw a complete redesign of the space where they started their apprenticeships 15 years ago. Now they have a new pass, induction cooktops, and a beastly charcoal oven with its own overhead misting system for killing stray embers.

Then there's new dishes, such as a Moreton Bay Bug salad with apple and tarragon; braised veal cheek with mac 'n' cheese; or pistachio souffle. "The menu has a slightly more modern twist to it," Kevin says. He and Gail would like to push things a bit more, but they can't. The regulars would kill them. "Consistency is one of our hallmarks,” Kevin says. “When you come to this restaurant, it's as good as it was last night, last week, last year, five years ago, and so on.”

Part of that is down to the Donovans themselves. Both still work the floor full-time, and their passion is plain to see. "People our age are starting to think about retiring, but I can't possibly imagine not doing this," Kevin says. "Yeah, we love this business, and we want people to love it as much as we do," Gail says. They're hoping the restaurant's facelift will help with this mission. "Now all that's left is for me to get a facelift," Gail says. "But I'm a bit busy." 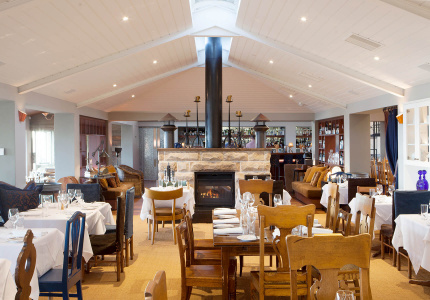