First Look: A New State of Grace For King Street

This palatial new spot – in the old Melbourne Steamship Co. building – has a second bar hidden behind a bookcase. 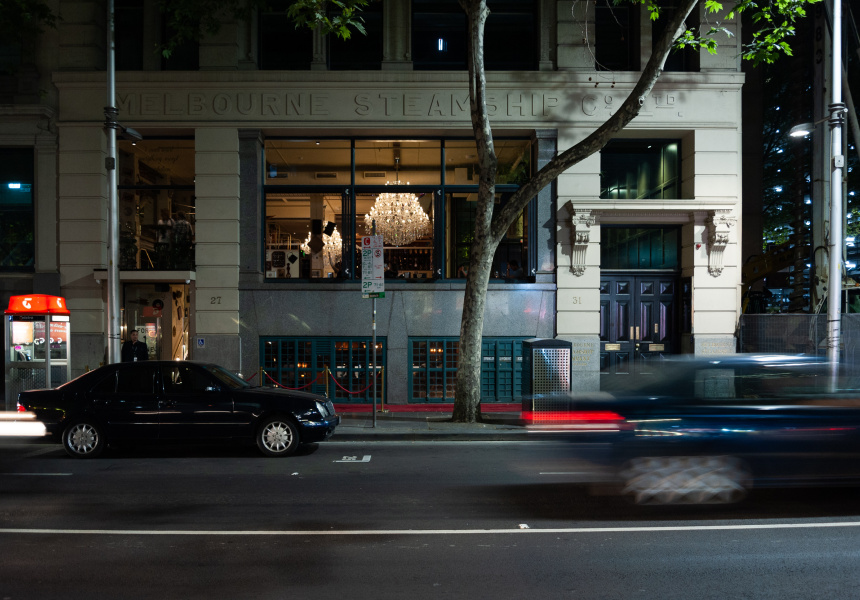 Photography: Courtesy of State of Grace
1/28
by Jo Rittey
Share

Walking into State of Grace, you’re immediately hit with grandeur. Between the enormous, glitzy chandeliers, a taxidermy giraffe head, souvenir teaspoon collections, and a faux-marble Roman-inspired wall sculpture, there’s a lot going on.

Much of it came from the old venue – State of Grace first opened on Collins Street five years ago, and moved to King Street when the lease ran out – but there are some new trinkets thrown into the mix as well. Many of them adorn the walls.

The majestic Melbourne Steamship Co. building was most recently home to offices, but has been transformed.

There are two dining rooms. One at ground level, with high ceilings, huge bi-fold windows looking out onto King Street and an old-world-style bar complete with balustrades, and another on the mezzanine. There's also a rooftop bar.

Downstairs, there’s a hidden bar named Fall From Grace. A sliding bookcase reveals a dimly lit den of iniquity reminiscent of something out of TV show Peaky Blinders. It has a real gothic speakeasy vibe. Grab a seat in one of the plush Victorian-style armchairs or stand around checking out more of the eclectic decor. Technically, it’s hidden – but it’s not really a secret.

“We’re not trying to confuse or lose anyone if they don’t know about it,” says bar manager Maxine Streit.

Streit was wrangling the drinks at the old venue, and here she’s mixing cocktails with prowess. Diamonds and Pearls is raspberry-infused Lillet Rosè, vodka, lemon and mint topped with prosecco, and the house Negroni is charged with coffee Amaro. The New York Sour has a bourbon base and a red wine float.

On tap, there are three Victorian brews and a couple from further afield, plus some craft tinnies. The wine list spans mostly Australian and French drops, plus a few Californians.

Chef Alison Hartmire, also from the old crew, is putting up European-influenced dishes. Start with salted, candied and smoked almonds, or chicken-liver pate with orange curd and brioche. Then move onto Hazeldene chicken with carrot and quinoa, or Aylesbury duck breast and leg with freekeh and rhubarb. For dessert there’s coconut parfait with rum brûlée and compressed pineapple.

This article first appeared on Broadsheet on October 29, 2018 and was updated on January 16, 2019. Menu items may have changed since original publication.