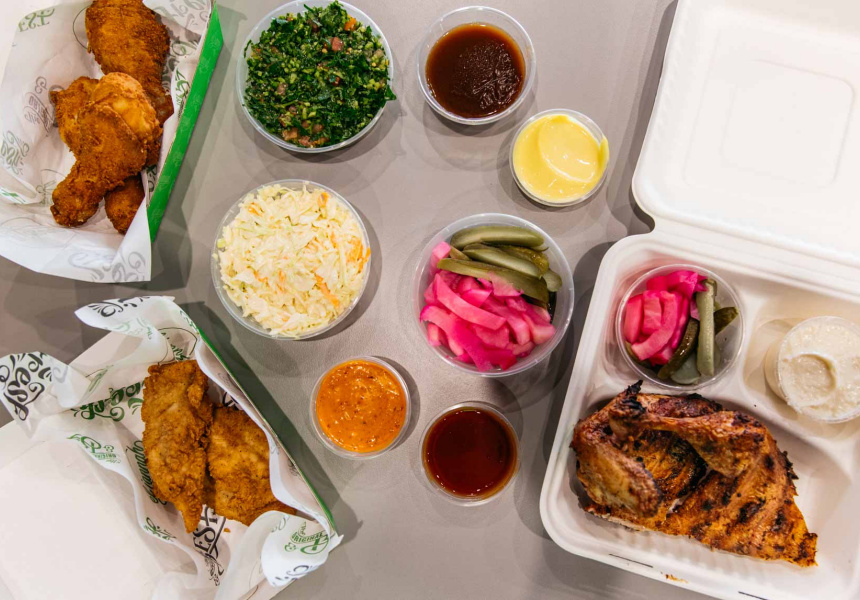 Even before the doors open at Newtown’s El Jannah, a line has formed out the front. And even after that rush subsides, the flow of visitors remains steady. Newtown locals are clearly aware of the cult status of these Lebanese charcoal chicken shops.

There are now seven El Jannah outlets in Sydney – the first opened in Granville in 1998 and the business slowly grew across western Sydney. Its latest shop is called El Jannah Express and this is the first time it is doing a takeaway-style shop where seating is limited, table service is non-existent, and there are no skewers or shawarma (slowly-turning rotisserie meat) on the menu.

Operations manager Charles Estephan, whose parents founded the eatery, says this spot is about speed. “It’s the same good old El Jannah,” he says, “just a bit faster and with one extra menu item to go crazy about.”

The new addition to the menu is Southern-style fried chicken. Drumsticks and tenders are available in three-, five- and 10-piece meals, and are just as juicy as their butterflied and charcoaled counterparts. Honey-mustard and sweet-and-spicy sauces are available on the side –a significant departure from hummus and baba ganoush, which were traditionally the only sauces available. “The chefs that made it are Lebanese, and that’s pretty much the only thing Lebanese about it,” says Estephan. “But I think it fits perfectly with the menu.”

The charcoal chicken nevertheless remains the hero. Served with garlic sauce, it can be had in quarter, half and whole portions. The latter includes a choice of pickles, tabouli or coleslaw as a side. Burgers, rolls and salads combining the same flavours are also available.

El Jannah, which means “paradise” or “heaven” in Arabic, was founded by Andre and Carole Estephan back when Lebanese charcoal chicken was only really served in homes. The Estephans created a place known for tasty chicken at affordable prices that, until now, inner-city residents had to go west for.