Produced by Broadsheet in partnership with The Star.

Recipe: Chase Kojima’s Oyster Vinaigrette (and How to Shuck)

Head chef of The Star Sydney’s Sokyo restaurant Chase Kojima shares his secrets for a Japanese-inspired oyster vinaigrette. In partnership with Sokyo, we find out how the secret is in the shucking. 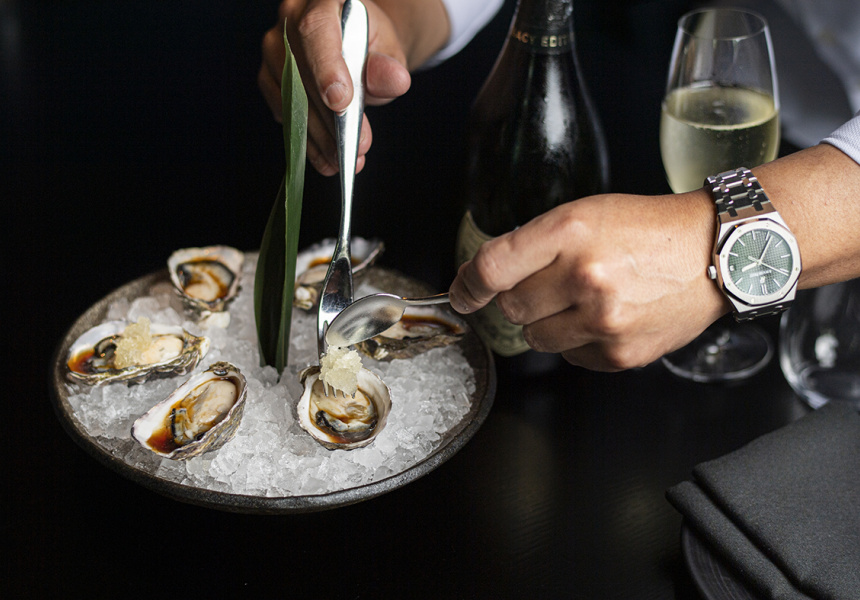 Chase Kojima doesn’t need to be told how to shuck an oyster. The head chef of Sokyo – the acclaimed Japanese restaurant at The Star Sydney – has heard every opinion imaginable about the “correct” way to serve the succulent mollusc.

“As much as I know about how oysters ‘should’ be prepared, I don’t care,” he laughs. “I can’t make everyone happy, so I’m going to do it my way.”

Kojima’s way is about finding flavour balances and paying careful attention to ratios. The oyster is the star, but it could always do with a little boost. Kojima says the vinaigrette he drizzles on the oysters at Sokyo is simple to make, despite the complex flavours, and can be done by anyone at home.

Of course, it all starts with the oyster.

“At Sokyo I use Pacific oysters from Tasmania,” says Kojima. “They have a sweet, buttery taste, but are quite mild. So they work well with sauces like ponzu.”

Ponzu sauce consists of rice vinegar, soy sauce and lemon juice, which Kojima pairs with a plum wine granita. A dash of rayu chilli oil completes the flavour combination. If you get it right, the oyster flesh with its natural juice will be the centrepiece, so aim for around 4mls of sauce per oyster, then adjust for personal taste.

“The ratio of sauce to oyster is really important,” says Kojima. “So you get the taste of the sauce but it doesn’t overpower the oyster. Rayu oil gives it a bit of kick and some smokiness.”

While the vinaigrette recipe is simple, the tricky part is preparing the oysters. One option is to buy the oysters already shucked (separated from their shells) but the downside is their shelf life will only be around six hours. For the best results Kojima recommends you buy oysters fresh and shuck and clean them at home. Be warned: it takes practice.

“You have to be careful not to cut yourself with the knife,” he says. “Make sure you have a dry, folded towel ready, and drape it over your hand holding the oyster, to protect your hand in case the knife slips. Use your dominant hand to prise open the lid, but go slow and careful.”

After shucking, be sure to clean the oysters well. “I don’t want a single piece of shell,” says Kojima. “Rinse the meat in a strainer, then lay the oysters on a paper towel before washing the shell. You want it as dry as possible so the water doesn’t dilute the taste.”

The reward for learning to shuck and clean is longevity. You can buy oysters and keep them in the fridge for a few days, ready to shuck, clean and serve when you desire.

“The quality will always be better if you shuck it yourself,” says Kojima. “It’s a great skill to learn.”

If you want to be inspired by the professionals before you embark, The Star’s four signature restaurants, Sokyo, Black Bar & Grill, Flying Fish and Cucina Porto, all celebrate the briny mollusc in various ways on their menu. Each venue will also be participating in The Gift of the Pearl on NYE, where one lucky diner will be shucked (sorry) to win an Australian South Sea pearl valued at up to $10,000. A glass of champagne and oyster comes complimentary with every booking.

Until then, here’s how to make Chase Kojima’s oyster vinaigrette recipe at home.

Method:
Mix all the ingredients together store in fridge.

Method:
Add plum wine, sake, and mirin to a pot and bring to the boil. Flambé (use a lighter to ignite) until the flames disappear, meaning all the alcohol has been burnt off. Add sugar and mix till dissolved. Remove from heat and allow to cool. In a separate container mix the yuzu juice, lime juice, lime zest, then plum wine mixture and tonic water. Stir well then add citric acid and mix again. Put a lid on the container and keep it in the fridge until lime zest settles on the bottom of Container, then move to freezer.

To serve:
Pour 4ml of your ponzu sauce on top of the freshly shucked and cleaned oysters. Add 1ml (one droplet) of rayu oil. Scrape about 2 grams of the plum wine granita with a fork or spoon on top of each oyster.

This article is produced by Broadsheet in partnership with Sokyo.

Produced by Broadsheet in partnership with The Star. Learn more about partner content on Broadsheet.