Kerby Craig (Ume Burger), Dan Pepperell (Alberto’s Lounge), Andy Bowdy (Saga) and others are putting sweet, savoury, and Japanese spins on the beloved sanga for one week each. 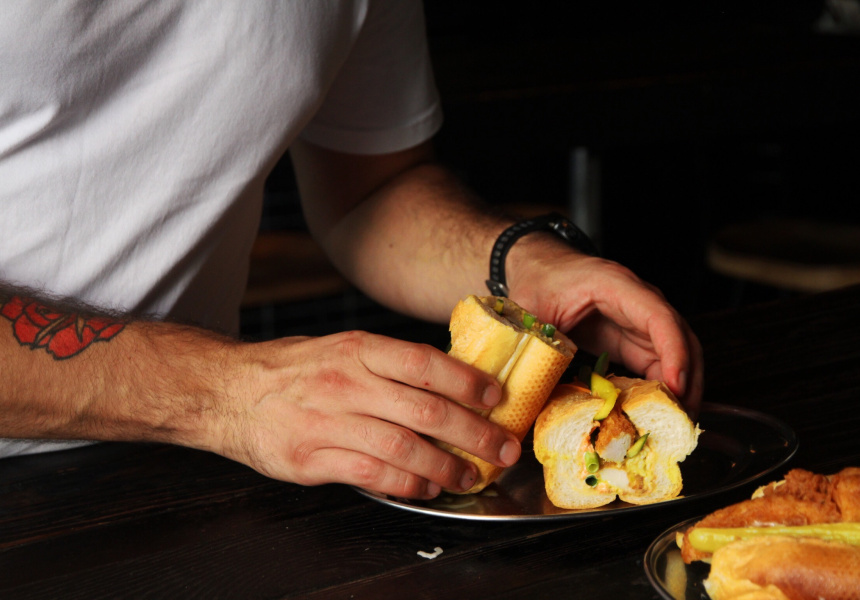 The sneaker store/fried chicken joint/cocktail purveyor/live-music venue is known for its superb fried bird sangas – which are made with ingredients such as dashi butter, mayo, cheddar and iceberg lettuce to make a very tasty snack – and is now taking its sandwich game to the next level.

Executive chef Julian Cincotta has enlisted eight of his closest friends – who also happen to be some of the city’s top chefs – to create elevated takes on the classic sandwich, which will be rolled out over eight weeks. The only rule? They must use Butter’s super-crisp, golden fried chicken – the rest is up to them.

Cincotta, who is also behind the menu at Glebe Lebanese eatery Thievery, will be putting a Middle Eastern stamp on the sandwich for the second rotation, taking cues from kebabs stuffed with toum (garlic sauce), chips and pickles.

Kerby Craig of Ume Burger fame is known for his Western take on Japanese food, so we’re excited to see what his nanban (Western-style Japanese chicken) roll with ponzu and Japanese tartare sauce tastes like.

Dan Pepperell – the man behind the exciting menus at Alberto’s Lounge and Restaurant Hubert – has built his reputation on not-so-traditional takes on European classics. He’s bringing that same creativity to a spicy “diavolo” chicken sandwich for the collab.

Following Bowdy is Nelly Robertson of English-influenced restaurant Nel. He’ll be whipping up something he often makes at home: a Japanese curry with fried katsu chicken served in a sandwich.

Then comes Gregory Llewellyn of Wish Bone. Before he opened his fried chicken diner in Enmore he was at Newtown’s Hartsyard, where Sydney’s fried chicken craze took off. His sandwich will be served with old bay mayonnaise, fermented gherkin and smoky hot sauce.

Finally, week eight will bring Monty Koludrovic to Butter. His sandwich specifics are still on the down-low, but given his track record at Icebergs, Bondi Beach Public Bar, Bonnie’s and The Dolphin, we’re certain it’ll be excellent.

The Friends of Butter Sandwich Series runs from March 4 to April 28 at Butter in Surry Hills and Parramatta.