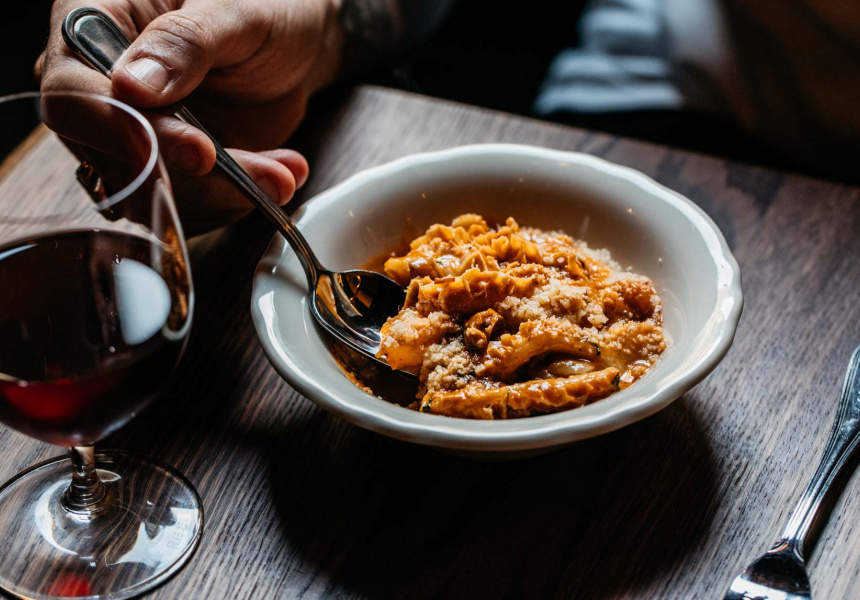 The closure of Don Peppino's in early 2020 marked the end of another pasta tenancy for Daniel Johnston, who also ran pop-up's Alfio's and Wilmer. At Alberto's Lounge, which opened in December 2018, he’s once again exploring Italian cuisine and delighting our tastebuds.

The menu includes dishes such as house-made ricotta with Sardinian flatbread, pasta e fagioli (pasta with beans), tonnarelli with blue swimmer crab and rigatoni with braised beef cheek. As with his pop-up's, Johnston's approach is fun but fastidious, and more Australian-Italian than straight-laced Italian.

Likewise, Alberto’s itself is more flexible than a typical restaurant – which is probably to be expected given it’s owned by Anton and Stefan Forte, the brothers behind Hubert, Frankie’s, Baxter Inn and Shady Pines. If you just want to show up unannounced and drink a few whiskies or cocktails, go ahead. Or if you want to settle in and make a night of it with the food menu, you can reserve a table and order from the wine list, stacked with wines from Tuscany and Sicily, and many others are available by the carafe.

Local artist Allie Webb – a frequent collaborator – created a mural on the rear laneway wall, which is visible through the large glass windows at the back of the venue. Elsewhere the aesthetics are the Fortes’ modernised interpretation of a “cool ’70s restaurant”. In late 2019, Alberto's was given an extension on their license to operate later into the night. Now, every Sunday Alberto's hosts DJs spinning world music – think Afro-beat, old-school disco, and the occasional Italian classic thrown in.