This North African baked-eggs dish is the perfect winter comfort food – and it couldn’t be easier to make at home. In partnership with Whitlock & Sons, Vince Estacio from Naïm shares a recipe that showcases the dish’s versatility. 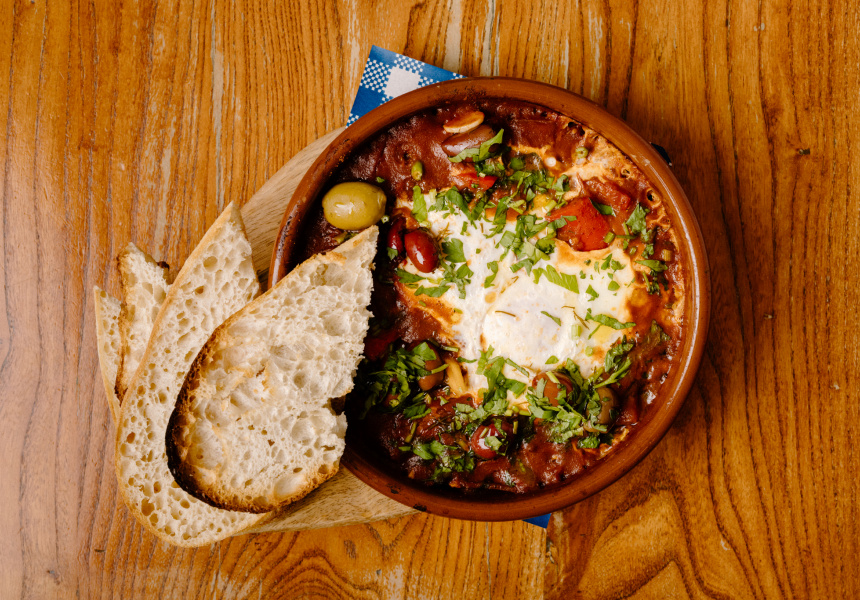 Home cooking in winter is all about warmth and cosiness – meaning any recipe involving stirring thick, fragrant tomato sauce on the stove is a winner.

Shakshuka is a favourite at Brisbane eatery Naïm, though head chef and co-owner Vince Estacio points out they put their own spin on the classic. “We have a lot of fun reinterpreting traditional dishes,” says Estacio. “That’s something we do really well.”

Its name translating loosely to “pleasant” or “joy” in both Arabic and Hebrew, Naïm was started by Adi Shabtay and Guy Frawley before American expats Estacio and BJ Wall took over a few years ago, adding a contemporary twist to its traditional Middle Eastern and Mediterranean flavours.

That includes adding some new notes to the shakshuka – including capsicum, white beans, sumac and saffron – and sometimes serving it with rice rather than the traditional crusty bread. Estacio also tops his version with garlic labneh to help cut through the heat and richness. (Labneh is simply Greek yoghurt that’s been strained through a cheese cloth to remove the excess water.) Naïm also serves a vegan version using carrot falafel in place of eggs, while some customers prefer to pair it with braised beef or lamb, or haloumi.

“I love that basil and white bean flavour. And they go really well with tomato,” says Estacio. “I didn’t strain the beans; I added it all straight into the tomato sauce. It was nice and creamy as it is.”

While basil isn’t traditionally used in North African cuisine, the herb gives this dish a distinct profile that evokes the like-minded Italian dish “eggs in purgatory”. And as with everything at Naïm, it puts a playful new spin on a time-honoured dish.

Method:
In a small pot, saute the onion and capsicum in oil until tender and caramelised. Add sugar and spices and let toast for a couple of minutes. Add crushed tomatoes and simmer, stirring occasionally for 30 minutes, the final consistency should be slightly reduced like pasta sauce or passata. Add canned beans and stir until combined.

Transfer sauce to an oven-safe, non-stick pan big enough to fit approximately 1L of sauce. Crack eggs directly on top of the sauce. Bake at 180°C for 12–15 minutes or until the eggs are cooked to your liking.

This article is produced by Broadsheet in partnership with F.Whitlock & Sons.