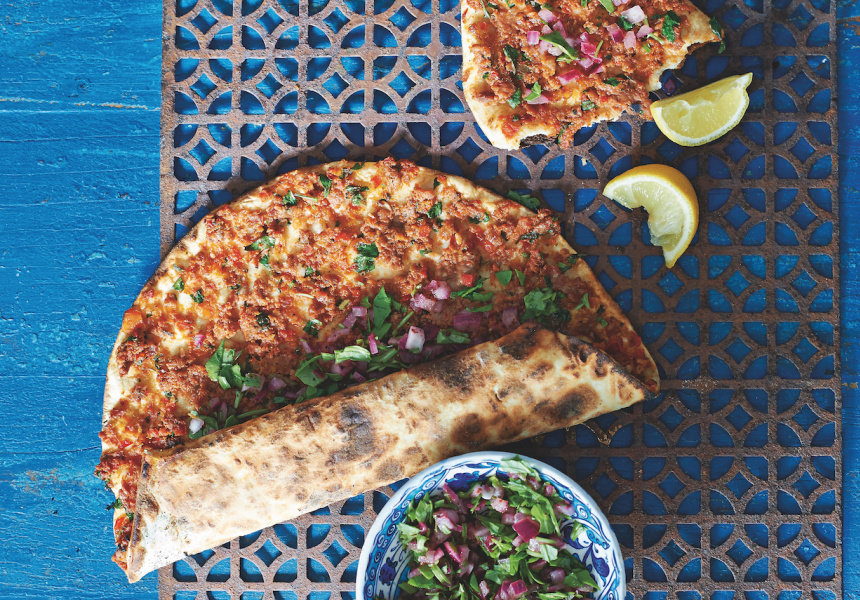 When Somer Sivrioglu opened his first restaurant Efendy, in a grand terrace in Sydney's Balmain, he revealed the nuanced flavours of modern Turkish cuisine. The Istanbul-born chef and author built on that in 2016 with his second restaurant Anason, a vegetable, seafood and meze-driven Turkish bar.

Pronounced "lah-mahjun", lahmacun should not be confused with the heavier kiymali pide, well known in and out of Turkey for the thickness of its dough and the coarseness of its meat and topping. "For lahmacun you need a light touch," says Sivrioglu. It is a specialty of the town of Sanliurfa, in southeastern Turkey, where they pride themselves on the crispness of their bases.

"When I say thin-crust pizza is Italy's answer to lahmacun, I'm not trying to start a fight," says Sivrioglu. "The idea of putting spiced mince on a disc of dough would have occurred to human beings long before there were nations called Italy or Turkey – or for that matter Armenia, Greece or Syria – all of whom have claimed to be the originators of this addictive pastry."

Method
Preheat the oven to its maximum temperature (as close to 300°C/570°F as possible). If you have a pizza stone or tile, place it in the oven (or leave your baking tray in the oven so it will preheat).

Sift the flour into a mixing bowl and add the salt. Make a well in the middle and slowly pour in 125ml (½ cup) of lukewarm water. Knead the dough for 5 minutes.

Sprinkle some flour on your work surface and then divide the dough into four balls. Cover the bowl with a damp cloth and leave to rest.

Score a shallow cross in the base of the tomatoes, then transfer to a heatproof bowl and cover with boiling water. Leave for 30 seconds, and then plunge in cold water and peel the skin away from the cross.

Cut the tomato in half and scoop out the stalks and seeds with a teaspoon. Roughly chop.

Remove the seeds from the capsicum and roughly chop.

Combine the mixture with the lamb mince and stir thoroughly.

Place a ball of dough on the floured work surface and, with floured hands or a rolling pin, flatten into a round about 25cm (10in) wide and less than 5mm (¼in) thick. Repeat with the remaining dough balls.

Using a tablespoon thinly spread the lamb mixture onto the rounds. Then press in with your hands.

If you are using a baking tray, take it out of the oven and put a piece of baking paper over it. Dust the baking paper with a little wholemeal flour.

Place the rounds of dough on the baking paper and bake for about 5 minutes, or until the edges are crisp.

Meanwhile, to make the salad, finely slice the onion and place in a bowl. Sprinkle with salt and sumac, add the lemon juice and olive oil, and then mix together with your hands.

Sprinkle the salad over the lahmacuns, squeeze on some lemon juice, and serve.

Tips
In Sanliurfa, they turn out hundreds of lahmacuns every lunchtime from big stone ovens. The best way to get the same effect at home is to use a pizza stone or an unglazed terracotta tile, and to ensure your oven is preheated to the max.

This recipe is an edited extract from Anatolia (Murdoch Books) by Somer Sivrioglu and David Dale.