Hospitality design is more vital than it’s ever been. Here are six young firms behind our favourite spaces across the country. 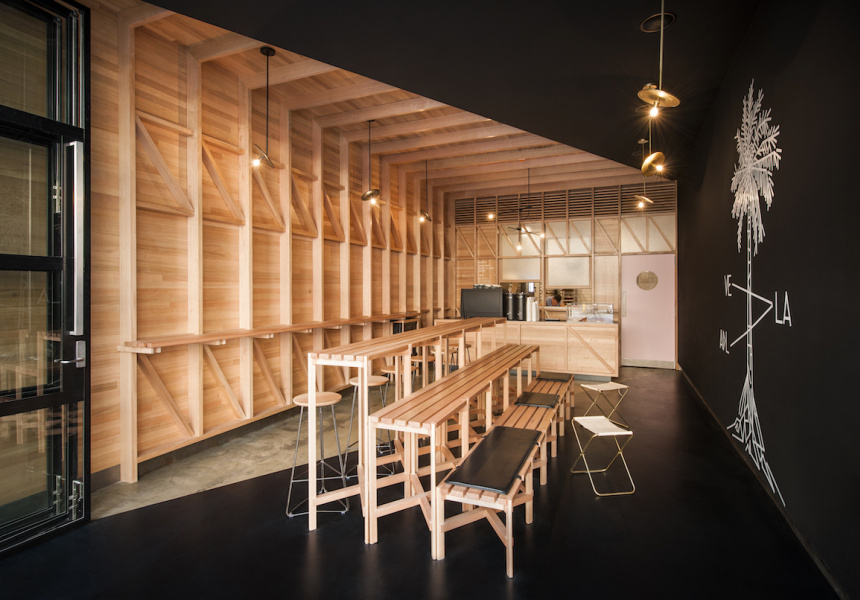 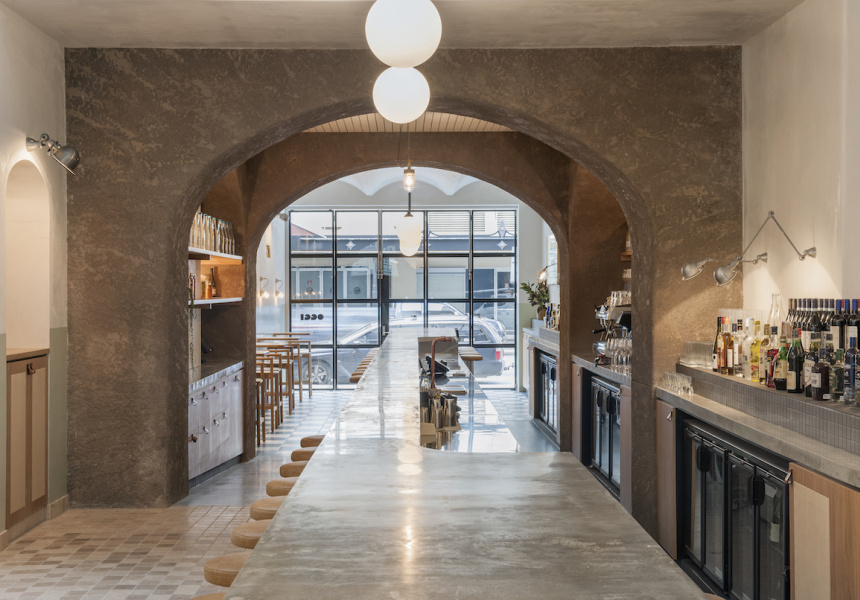 In the city, architecture is all around us. The best examples challenge our interpretation of space and how it can be used. Others are just really easy on the eye. Cafes, restaurants and bars sit at the nexus of these two ideas. On one hand, a space must accommodate the chefs and waiters who whirl around it. On the other, the customers who sit in it, eyes roaming the space between bites. Increasingly, the architects securing these projects seem to be young, nimble practices less than five years old. Here are six newcomers determining our cities’ future aesthetics.

This firm’s founders, Graham Charbonneau and Dave Bickmore, met studying architecture at the University of South Australia. The two parted ways after they graduated and went to work at different commercial practices, but eventually reunited to pursue their dream project. Studio -Gram officially opened in 2014, and is now responsible for some of the hottest new hospitality, commercial and residential projects in the state. They’ve chosen to remain a small operation and are currently capped at six staff members. From the outset, the team has consciously pursued an “anti-style”. Its designs are created with a particular focus on the subconscious elements of a site that dictate how people interact with and move through it. One of the most lauded examples of this approach is Italian restaurant Osteria Oggi and its neighbouring project, Abbots and Kinney bakery. These two spaces sit side by side on Adelaide’s Pirie Street but most people wouldn’t guess they were designed by the same practice. While Oggi – which won in the Restaurant Interior category at the 2016 World Interiors News Awards – features more formal materials and shapes such as vaulted ceilings, archways and a 21-metre poured concrete bar, Abbots and Kinney is all warm, stud-like timber framing, catering more astutely to its daytime audience.

Similar to Studio -Gram, the two directors of Sans-Arc Studio began architecture careers at the University of South Australia. When the studio launched in 2015, it was only Matiya Marovich. Partner Sam Cooper came on board in January 2017. The duo works across three types of projects – hospitality, residential and commercial – but it’s their hospitality projects that have gained the most attention. Although timber, gabled roofs and earthy blue and green hues have become calling cards of Sans-Arc, diversity and a sense of adventurousness apply to each new project. Adelaide’s Pink Moon Saloon cocktail bar and eatery is exemplary of both sides of the practice – its idiosyncrasies and its innovation. The brief was highly unusual: turn a bin-lined alleyway with no roof, walls, plumbing or anything else into a bar. The tiny saloon now exemplifies what Sans-Arc calls “hut architecture” – a global practice in which rustic shelters are made from materials sourced within walking distance. This idea was applied to Pink Moon with Australian timber, concrete blocks and an offbeat colour palette. The project also features a vaulted ceiling, and a striking blue facade that makes Pink Moon stand out in its restricted site, sandwiched between two mid-rise office buildings.

According Matthew Eagle – the man behind the acronym – his firm was only put “on the table” as an idea in 2013. In the brief time since then, the company has worked on projects of all scales and types. While many emerging practices plant their flag in the sand with a signature stable of geometries or a colour palette on repeat rotation, each ME project takes on a life of its own, informed by deep research into place, client, history and site restrictions. If there’s one constant, it’s a penchant for natural materials such as wood, which are chosen for reasons aesthetic and functional. (Natural materials tend to be more sustainable and long-lived.) ME’s multi-award-winning Gauge restaurant project on Brisbane’s Grey Street offers a soothing, light-wooded respite from the street. The small space feels larger thanks to a restrained palette of natural materials and a focus on lighting – natural in the daytime, ambient and targeted at night. More subtle touches such as perforated ceilings and minimally framed open storage add to this sense of lightness and permeability.

You won’t find any “designer fluff” in the oeuvre of Perth-based practice Lazarus Studios, which strives to avoid ersatz elements in its projects. Cale Mason and Maja Sedic founded the firm in 2015, to remedy what they saw as an unnecessary formality and uniformity in the city’s hospitality projects. They aim to add more fun to their projects, play down site restrictions and ignore the unspoken rules of bar and restaurant design. To ensure they stay agile and irreverent, the duo is yet to hire anyone. This hasn’t slowed them down. In January they completed Short Order Burger Co, a project stacked with Lazarus’s signature blend of nostalgia and warm modernity. While it might seem obvious to lean on American diner aesthetics for a burger joint, attention to detail ensures this one really hits home. Mason and Sedic sourced 1970s pool tiles and anodised hotel lobby signage to bolster the Short Order brand, while Lazarus’s own style is represented with the use of rich, textured surfaces and old-timey upholstery.

Space-age Melbourne croissanterie Lune. The compact Doughboys Donuts shop. You've probably come across one of Studio Esteta's gorgeous interiors, whether online or in person. And yet, its work always has a strong conceptual underpinning. Founders Sarah Cosentino and Felicity Slattery met working at another hot young Melbourne practice (Clare Cousins Architects) before striking out together in 2015. Their Bondi outpost for Melbourne-based Mexican chain Fonda has this exact combination of surface-level slickness and conceptual soundness. It reflects Bondi’s coastal essence, the youthful personality of the brand and the simple nostalgia of a home (in Mexico, a fonda is a restaurant inside a private house). While these three influences could have resulted in a jarring experience, the curved, powder-blue interior is a harmonious coming together of Bondi, Mexico and fondas, by way of metallic frames, tan leather benches and patterned pot plants.

Acme & Co is a six-year-old business with the resume of a 30-year-old one – and the confidence to match. Sydneysiders will likely have spent comfortable hours inside the firm’s high-profile designs for the Grounds of the City, Watsons Bay Hotel, Flower Child, Fred’s Bar and Archie Rose Distillery, among others. Founders Caroline Choker and Vince Alafaci were working as an interior designer and architect for a decade before launching their own firm, which explains its apparent maturity. Many Acme & Co projects meld industrialism and old-world glamour by mixing large-scale constructions with refined materials, but it’s often hard to pin down why each space is such a joy to sit in. In the case of the Grounds, it’s that every tiny detail is clever, from the curved, pearl-lined chesterfield-texture bar stools to the inconspicuous moody glow created by predominantly hidden lighting. It all adds up to create a single, highly immersive experience. This adept world making has manifested itself in myriad ways across the city. One day, Sydney’s hospitality scene will be a map dotted with different destinations from Acme & Co’s imagination.