A charcoal-fired rotisserie turns out hasselback potatoes like you’ve never had before, succulent Milawa chook and more. Plus, a majestic dessert trolley with unmissable cakes, Ben & Shewry’s Cherry Ripe-inspired ice-cream and smashable reisling slushies. Your average camp cuisine this is not. 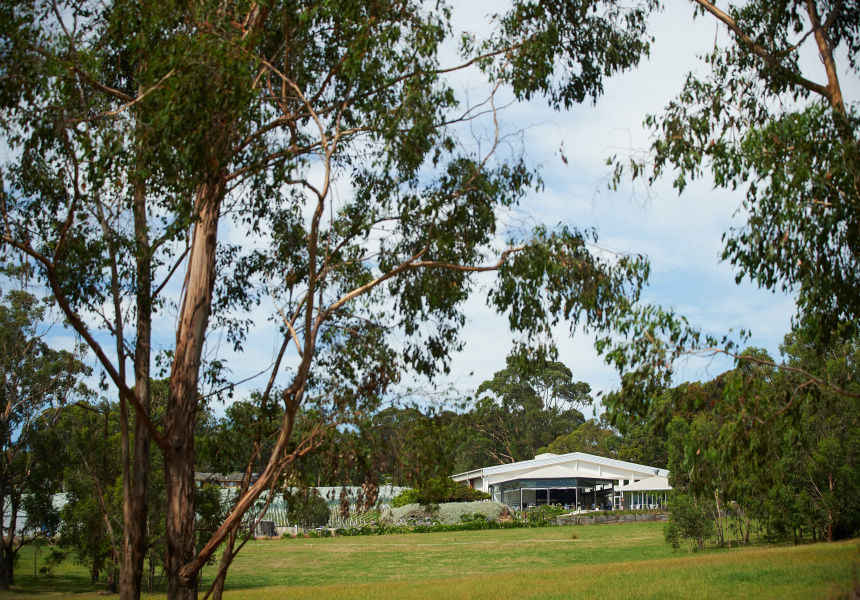 Only an hour from the city – but worlds apart from the Ripponlea fine diner it shares a name with – is Ben Shewry’s recently opened pop-up restaurant, Attica Summer Camp.

After Victoria slogged through a tough 2020, “I wanted to create something that was really fun and energetic and felt good; something that was super kind,” Shewry tells Broadsheet. “That’s the guiding principle of the whole thing.”

And it’s clear as soon as you arrive at the lush Yarra Valley property, once home to Lillydale Estate winery. Green-and-gold banners read “Welcome Campers” and “This One Time at Summer Camp…” (presumably a nod to American Pie). While the treaclier slogan “They Kissed Under the Tree at Attica Summer Camp” is plastered on an aptly tree-shaped sign.

There’s also a huge re-creation of American outsider artist Daniel Johnston’s “Hi, How Are You” mural. Shewry got permission from the late musician’s family to reproduce the artwork, which first appeared on a wall in Austin, Texas, in 1993 – and has since featured in mental-health initiatives around the world. “There’s something about that childlike, lovely, heartfelt frog just saying, ‘Hi, how are you’, that sets the tone. I just wanted to say … we’ve all been through this terribly difficult time, but now we have something better to look forward to.”

It was a mad rush to the finish line for Shewry and his dedicated team (which includes a number of friends and family). He says many of them were pulling 18-hour days, seven days a week for two months.

The result is a cosy, conservatory-like indoor dining room with floor-to-ceiling windows, views across the paddocks to the dusky hills, and a pergola dripping in greenery. Plus, a roomy, open-air outdoor dining space with those same unfettered views (there’s heating, but you’re advised to bring a jacket just in case).

Arguably the best thing about any camp experience, though, is the campfire. But – unsurprisingly – your average camp cuisine this is not. Two hulking rotisserie grills, like the ones you might see in a charcoal-chicken shop, have been installed. “We’ve cooked over charcoal at Attica but on a really small scale. This is a totally different thing.”

An Attica signature is A Simple Dish of Potato Cooked in the Earth It Was Grown, and the spuds at Summer Camp are similarly show-stealing. Think you know hasselback potatoes? Think again. They’re usually scored on one side then roasted, but Shewry instead scores them all the way round, grills them on the rotisserie, chicken-style, and bastes them in butter. (Just listen to that sizzle.)

“I’ve got the scars to prove the hard yards I’ve been doing on that grill,” Shewry says. “If you saw my arms, you’d be horrified at how badly burned they are. You learn quickly, that’s what I would say.”

Also fired over the coals: succulent Milawa chook; marinated lamb that’s shaved and served in 100-gram portions dolloped with garlicky yoghurt; and skewered cauliflower served alongside a herby green dressing. A second grill is used for the whole King George whiting with roast tomato and to ever-so-briefly grill baby abalone, while a big barrel smoker turns out hot-smoked King salmon and pastrami.

The idea is to come incredibly hungry and graze your way through. Start with what Shewry describes as “unbelievably delicious” friesling (frozen reisling), move onto house-made focaccia and smaller snacks, and then get meaty. (It’s substantially more affordable than Attica – snacks start at $10 and meats start at $16.)

But saving room for dessert ought to be the number-one camp rule. A collaboration between Shewry and pastry chef Rosemary Andrews, the sweets are rolled out majestically on a trolley. And they’re truly a thing of beauty – and precision. The cotton sponge, for example, is moist, ultra-light and took Shewry three months to develop. “People look at it and it’s fairly disarming,” he says. “It reminds people of their grandmother’s sponge and then they eat it and say, ‘Wow, that’s nothing like my grandmother’s sponge’.”

His Cherry Ripe-inspired ice-cream, cheekily christened Ben & Shewry’s, is the ultimate anti-Attica. You’re given a tub, two spoons and encouraged to go for it. You’ll also find Tim Tams made with Four Pillars Negroni marmalade and Andrews’ lemon tart, which Shewry says is the best he’s ever eaten.

Attica Summer Camp runs until the end of May. Bookings are available one month in advance.