A monumental gilded cage by art star Ai Weiwei. A shimmering, spherical portal with an intensifying soundtrack. And more. All you need is an app to see the Melbourne and Cranbourne gardens digitally transformed for this ambitious international exhibition. Photography: Courtesy of Seeing the Invisible
1/4 Forget Me Not by Ori Gersht

Photography: Courtesy of Seeing the Invisible
1/4 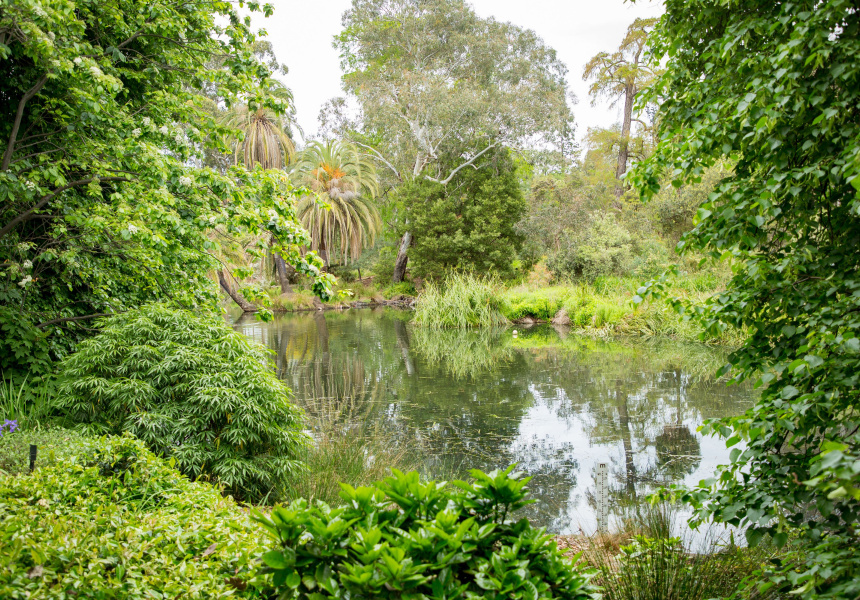 Have you ever heard the word “phygital”? It’s used to describe the blending of physical and digital experiences. But what does that actually mean?

The best way to get your head around it is by checking out new augmented-reality (AR) art exhibition, Seeing the Invisible. It’s outdoor, and hence lockdown-appropriate.

Imagine you’re strolling through the inner-city oasis that is the Royal Botanic Gardens – the grand oak trees, the lush ferns, the perfectly manicured lawns. Naturally, you pull out your phone, but not to take a photo. Instead, you open the Seeing the Invisible app.

On your screen appears a monumental gilded cage that, as you slowly turn around, seems to completely surround you. It was created by Chinese multidisciplinary artist and activist Ai Weiwei – originally in 2017, as a huge physical structure in New York, but now translated into the sci-fi-esque medium of augmented reality. Weiwei invites you to see the world as a captured bird or imprisoned person would.

This ambitious exhibition of contemporary artworks leans entirely on AR. And in true phygital style, it premiered simultaneously in 12 botanic gardens around the world – in the US, the UK, Canada, Israel, South Africa and at Royal Botanic Gardens Victoria’s Melbourne and Cranbourne locations (RBGV was the only Aussie organisation invited to participate).

It features more than a dozen works by high-profile international artists, including Weiwei, Isaac Julien, Sigalit Landau and El Anatsui, as well as a younger generation of artists working at the cutting edge of art and tech, represented by Jakob Kudsk Steensen, Sarah Meyohas and Timur Si-Qin, among others.

And then there’s a contribution from Turkish-American artist Refik Anadol, whose work you may remember from the most recent NGV Triennial; 10 metres high and wide, it was the largest-ever digital artwork to be displayed at the NGV. For Seeing the Invisible, Anadol has created Machine Hallucinations: Nature Dreams AR, which uses an artificial-intelligence algorithm trained on 68,986,479 million raw images of nature. Anadol frequently talks about his use of data as a pigment, and in the context of the botanic gardens, this piece reminds us of the impressionist-era “en plein air” style of painting, though more geared towards the 21st century.

Developed during the pandemic, Seeing the Invisible was initiated by the Jerusalem Botanical Gardens and Outset Contemporary Art Fund. The curators both commissioned new pieces and worked with artists to select and adapt existing works to an AR format, positioning the results in unique spots around participating gardens.

According to co-curator Tal Michael Haring, “The interplay of these augmented-reality works in vibrant natural settings breaks down the binary between what is often considered ‘natural’ versus ‘digital’, and in this way provides an exhibition experience that is much more connected to the way we live today.”

Also featured in the exhibition is a piece by Australian artist Mel O’Callaghan, who lives and works in Paris and Sydney, and whose practice stretches across several mediums. O’Callaghan is interested in human behaviour and psychology, and she explores the ways in which breathing and rhythmic sound can have transformative effects.

In Pneuma, O’Callaghan’s first work using AR technology, you’re encouraged to move towards a shimmering portal. You can then cross the threshold into a sphere of increasingly vibrant colour and light. What’s particularly intriguing about this work is its sound component – you’re able to hear the sound of breathing (“pneuma” is an ancient Greek work meaning breath, spirit or soul), which becomes faster and louder the deeper into the sphere you go.

For O’Callaghan, working with AR was a learning process, but she was willing to embrace the technology. “I really wanted to create a new experience,” she says, “not just take one of my [existing] works and put it in the garden.” She initially assumed visitors would intuitively know they should walk towards the floating sphere when they saw it, but as part of the collaborative process working with AR developers, “We did things like creating [wayfinding] dots that make you want to go closer to this work.”

Seeing the Invisible is on at Royal Botanic Gardens Victoria’s Melbourne and Cranbourne gardens until August 2022. Download the app here.