Lord of the Manor

The former owner of The Henry Austin walks us through his new kingdom – an 83-year-old medieval-style castle in the Adelaide Hills. 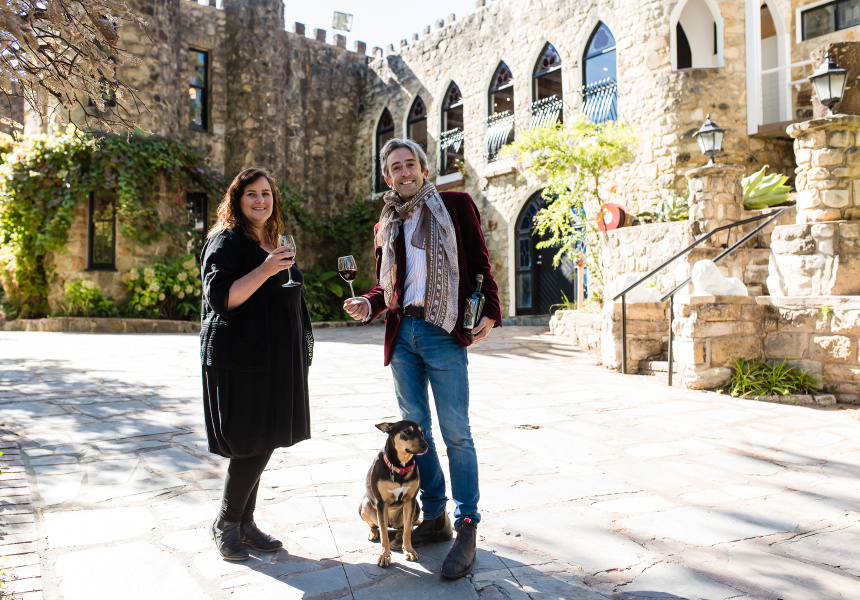 “The building itself is, frankly, ridiculous.”

Max Mason is acutely aware of the inherent comedy of his position. His new home and workplace is a 3000-square-metre medieval-style castle on a two-acre Adelaide Hills property.

Known for decades as kitschy wedding venue Camelot Castle, it’s been resurrected as The Manor under the four-strong team of Naomi Growden, Marcus Dewar, Alfonso Ales and Mason. But it might have played out very differently.

After the untimely closure of The Henry Austin last year, Mason hit the road with his dog Pho Shizzle. “I got in the ute and took a trip into the red heart,” he says. “I wanted to see Uluru, I wanted to understand Australia better. When I came back I kind of resolved to be out of hospitality. I thought, ‘Okay, I’ve done this too much’.”

Growden and Dewar had other ideas. They invited Mason to pay a visit to their newly acquired castle, nestled deep in the wilds of Basket Range: the region with near-mythical status as the home of Australia’s natural-wine movement.

“[Naomi] had written on a blank piece of paper: Max Mason, Lord of the Manor, Basket Range. I said, ‘What do you want me to do with that?’ She said, ‘I’d like you to accept it’.”

He was dubious at first. “I said, ‘I’m a nightmare: I’m homeless – because I was living above the restaurant – I’ve got a dog and I’ve got 5000 litres of my own wine’. She said, ‘Perfect, you now live here, with your dog, and we’ll sell your wine’.”

The offer was hard to refuse. But there’s more that drew Mason to the historic manor. Just as the charismatic Brit delights in spinning a yarn, he also enjoys hearing them.

“I love narrative. I love history. The reason I took The Henry Austin is because the story of that building is astonishing … and this place has one of the most colourful histories of, I think, any building in South Australia.”

He’s not kidding. Before we set foot inside the castle, Mason sits us down and regales us with its origin story. “In 1935 a guy called Bert Pinchbeck, a Brit, made his money in real estate and he decided he wanted to stay in Australia,” Mason begins.

“His true love, Lady Pinchbeck, was back in the UK saying, ‘I’m not going to move to Australia. Why would I leave Warwickshire where we have castles?’ So he built her a miniature Warwick Castle. She came out and laughed at it. There’s a garden ornament of her gazing lovingly upon it [but] she didn’t gaze lovingly upon it. She went back to the UK.”

Brutal. But Mason cushions the blow with his trademark optimism. “It’s certainly castle-like.”

Adelaide local Hans Reicht became the caretaker in 1971 and spent the following decades expanding it. “He worked from 7am to 4pm building it,” says Mason. “Then at four o’clock he’d get in the shower, drive down to the city and work in hotels in the city … generating any money he could to keep building the place. It’s just a love story. He’s still here as my groundsman.”

Reicht, now 83, tends to the site’s stunning secluded gardens and courtyards. As Mason walks us through the grounds we pass brambles, elephant ears and weeping mulberry trees. “This is our home,” he says, as Pho Shizzle splashes about in a nearby fountain. There’s still some disbelief in his voice.

“The first day I came here, I admit, I laughed at Hans,” he says. “I thought, ‘You crazy bastard, what are you doing [spending almost] 50 years just building’. Now I can see myself in 50 years as a 90-year-old guy still tottering around, getting on people’s nerves.”

It’s not hard to feel Mason’s sense of awe and excitement. His eyes are wide as he rattles off his plans for the site, which include festival pop-ups and an outdoor theatre.

The Manor’s main function, though, is wedding venue – and an enchanting one at that. There are two function rooms – for parties of 120 and 240 people – terraces overlooking the sprawling site, 12 units for accommodation and a tiny chapel complete with bell tower, which Mason is quick to show off.

Until recently the chapel’s interior was plastered with hundreds of brass plaques emblazoned with the names of people who were married there. Mason has made it his mission to return each plaque to its namesake.

His other goal is to position The Manor as a cellar door for the region’s famous drops “from winemakers who are otherwise inaccessible”. “With BK Wines, Jauma, Ochota Barrels, Charlotte Dalton and Gentle Folk as my immediate neighbours I would feel fraudulent not having Basket Range winemakers here.”

The first taste for the public will be at Fresh Wine Disco on April 21. “The timing is perfect,” says Mason. “I get the most extreme opening party you can imagine.”

The exploratory tasting party will bring together producers from across the state – and country – to pour fresh juice from this year’s vintage, siphoned straight out of demijohns. Straying from the scout-hall set-up of last year, winemakers will be stationed in various rooms to encourage discovery. “We want everyone to explore,” says Mason. “The whole magic of this place is exploring a castle … with some of the coolest winemakers in the world scattered around.”

A restaurant helmed by chef Ales (ex-The Little Soho) is in the long-range forecast. Mason hints at an asado set-up with “large-scale feasting” and open fires. Confirmation is still a ways off “but we can promise we won’t be another pizza restaurant” he’s quick to add.

Mason fires on all cylinders. It’s what’s propelled him to the top of Adelaide’s restaurant scene. But it’s easy to fall from there.

“South Australia is getting very brave with its food,” he says. “There are people now who appreciate brave things.” It’s a sanguine statement with a lot of weight behind it.

Eight months ago his year-old “Australian yum cha” restaurant was forced to close due to high rental costs and too few diners through the doors. But he’s resolute in his vision. “I’ve always built restaurants on the basis of an idea of sustainability,” says Mason. “I built my first restaurant, a sausage and mash place [in the UK], on the basis of food miles and carbon footprint, and it worked immaculately.”

There’s a poetry in Mason taking on the castle that was dismissed by Lady Pinchbeck so soon after The Henry Austin was rebuffed by Adelaide diners. “It’s possibly the biggest challenge ever for me, but it’s also the most natural. You look at it and, well, it needs to be alive again. There’s probably no one more stu …” he jokes, before correcting himself: “No one more fitting to do it.”

The Manor officially opens on April 1. Fresh Wine Disco is on April 21 from 4.30pm. Tickets are available here.