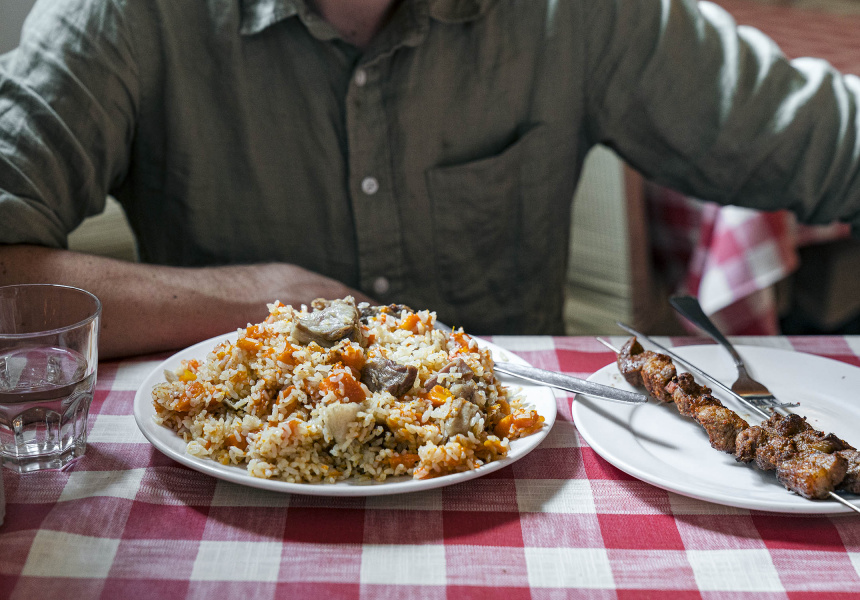 The sign outside has subtitles in Chinese characters. On the menu each dish is translated into both English and Mandarin. But many of the diners here will adamantly tell you that this is no Chinese restaurant.

Both the owners and many of the diners here are Uighur (pronounced “wee-guh”) – an ethnically Turkic group of people living mainly in far-west China. They’re predominantly Islamic and have their own language, culture and cuisine. You’ll see it all here – in the faces and language of the diners, the music played, the traditional rugs hung on the wall and, of course, in the food.

Uighur cuisine is heavy and wheat-based, blending traditions from both Central Asia to the west and the Chinese cuisines of the east. The polo is a good example (pilau or pilaf in other languages) – rice stewed with lamb, carrots (pumpkin here) and onion until it’s silky in texture and buttery to taste.

The most popular order, though, is not a Uighur tradition but a Sichuan-influenced western-Chinese dish. Dapanji is the name, an immense, super-garlicky, medium-spicy chicken stew that’s bulked up by potatoes and long strands of fat, handmade noodles.