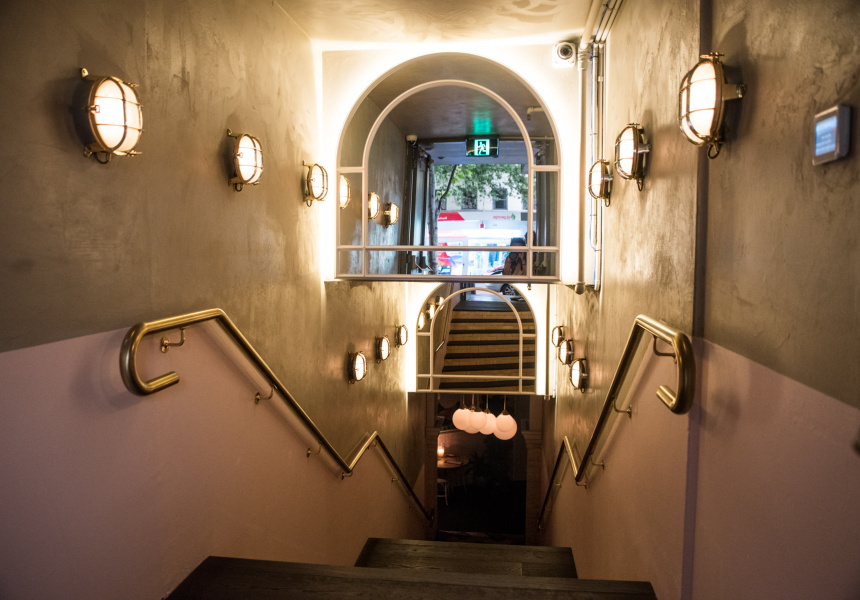 Imagine striding into The Grand Budapest Hotel, at the faded end of its legacy. This is Della Hyde, the latest venue from Hamish Watts and Ben Carroll of Applejack. For something so bright and opulent, it’s in a basement on Oxford Street. There is a pink and green pastel palette and rows of columns. Della Hyde has a focus on drinks making it more of a bar than a restuaurant.

The cocktails will be seasonal and are based on what is at the market. It has featured a Pisco And Apricot Brandy Shake with orgeat, lemon and an artfully flayed flower of peach. There are also four regular cocktails, including a floral Negroni infused with cold-drip coffee and a pungently charred orange peel. There are some beers and wines from regions you might not have heard of before, Such as Dutch light Arc Alley or an IPA from Scotland’s Brew Dog Punk.

Food is more straightforward. There are only nine things to order, most of which have been exported from Applejack’s other venues (Butler, Botanist, Bondi Hardware and SoCal). The most substantial, in flavour and size, is the sweet, gravy-covered pork short ribs with a Levantine spice paste.