A casual dining concept from the team behind Nolita and La Lola. 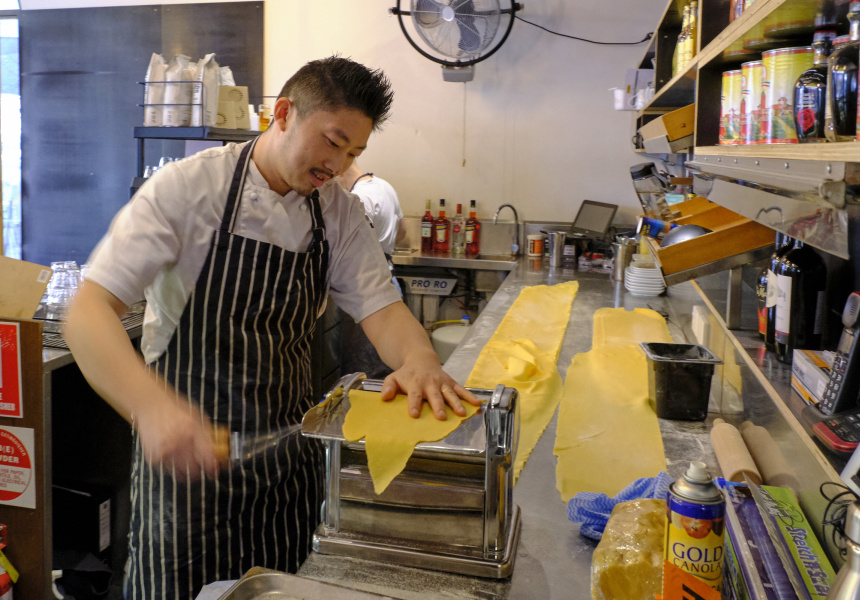 I first met restaurateur Michael De Marte nearly 20 years ago. I was a regular at his venues Cafe Bocca in Shafto Lane and Rosso Espresso on St Georges Terrace (one of the city’s first espresso bars). In more recent times, De Marte launched and sold Italian restaurants Nolita and La Lola, and established cafe brand, Atomic. His latest venture is another Italian restaurant: Automatic, on the same street as the one remaining Atomic that he owns.

“Automatic is a combination of what we’ve done in the past with La Lola and Nolita,” says De Marte. “We’re trying to be more casual than the full-on restaurant type of business. I think in this market people want a more approachable, casual kind of eating experience.”

Automatic’s simple fit-out and furniture might be very cafe-esque, but an attentive swarm of waitstaff – mostly bald blokes in aprons – quickly challenges perceptions. De Marte says that his emphasis is on simplicity without compromising quality.

“We want to almost create a new genre of casual-but-quality restaurant: good service, not in your face, just go back to basics,” he says. “We’re keeping it simple, mostly traditional recipes with a few modern dishes as well. A lot of Italian restaurants go very modern and sometimes it’s too much.”

The pizza is Roman-style and made with a 72-hour fermented dough and cooked on stone in a specialist electric oven. The result is a pizza with a lighter and crisper base than the softer, more ubiquitous Neapolitan-style pizza. The pizzas will be launched as Autopizza and served from a dedicated counter to both takeaway and dine-in customers.

“We’ve got an affinity with Rome,” says De Marte. “We love Roman cuisine, lifestyle and the way they make their breads. We’re really proud of our pizza. We’re trying to do something special. That’s why we believe we need to separate it and give it its own identity.”

The average plate costs $25, with steak and fish-of-the-day less than $30. As promised, the pizza is crisp and retains its crispness long after it hits the table. The chicken schnitzel (served on-the-bone) is juicy, the gnocchi is pillowy, and the house-made pappardelle with confit duck and mushroom is some of the lightest pasta I’ve wrapped around a fork.

The 75-seat restaurant is licensed with an Italian and Australian wine list, tap beers and Italian cocktails: think spritzes, Negronis and other mixed drinks made with Campari. BYO ($5 per bottle) is always available.

Automatic has opened to little fanfare with no website, social media or marketing. Seating is walk-in only and service will shift to seven-day breakfast, lunch and dinner as summer approaches. Takeaway, including Uber Eats, begins in June. An al fresco dining area will be built over the winter months.

“We’ve been doing this for a long time and this is the space we want to be in,” says De Marte. “We want to have fun, we want to be casual, we want to meet people and we want them to have a good time.”