The Australian singer-songwriter might be our most famous music export in years. Ahead of his national tour we talk to him about privilege, floppy branches and stadium shows. In 2014 one of America’s biggest pop stars chose a local music act to support her US and Canadian stadium tour.

For Vance Joy – born James Keogh – the journey to Taylor Swift’s stage came on the back of his ukulele-fuelled song Riptide, the now-ubiquitous single that topped the Triple J Hottest 100 in 2013 before going on to clock over 500 million streams on Spotify.

Keogh was part of a wave of post-Arcade Fire-style bands such as Mumford & Sons and the Lumineers who lifted exultant catharsis from the Canadians but left the angst and dread at the funeral. His debut album Dream Your Life Away reached number one in Australia, two in Canada and the Top 20 in the US and the UK.

“It seems silly, when you do sound check, like, ‘This is crazy’,” says Keogh of setting up for Swift’s show. “[There are] empty seats and a general admission area, then a full football field and then you’ve got a super-high stadium. Like, how can that sound even travel up to there? … Visually it’s quite daunting.”

Apart from Swift’s 1989 tour he’s performed at Glastonbury. He also just played a prominent spot on the bill at Coachella. Closer to home he tours his new album Nation of Two around Australia this year headlining venues as large as Rod Laver Arena. 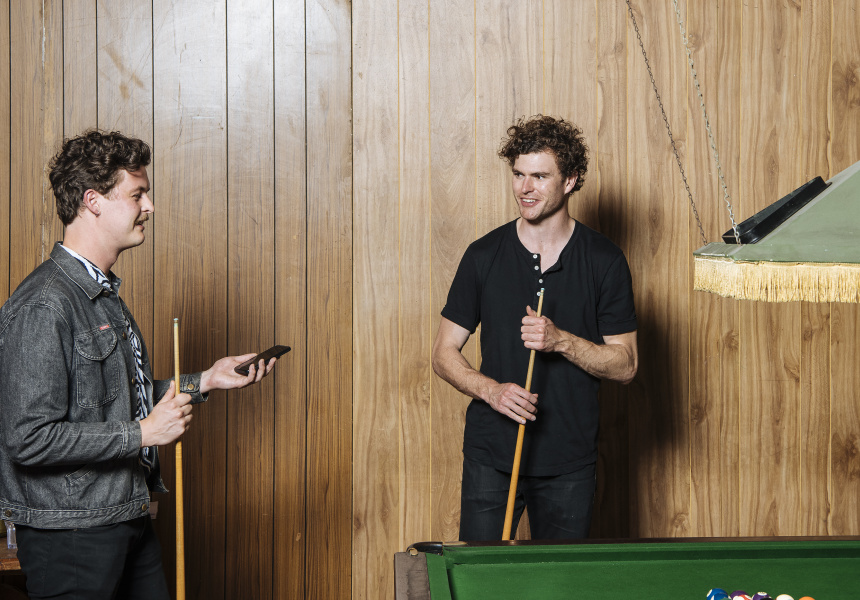 I first meet the Melbourne-born singer-songwriter at Fitzroy pool hall Red Triangle – one of his old pre-fame haunts. He’s frank, and confident and self-assured, but not in a cocky way: he’s just comfortable in his own skin.

Keogh is a star with everything necessary to go supernova. He’s a handsome chap with a jaw line sharp enough to shave itself, and the warm crop of ringlets he sports would melt even the stiffest hair wax. But most importantly he has a seriously good voice. It’s imperfect and sometimes frail but can swell with enough passion and conviction to force even the most reluctant romantic to throw rice at a wedding.

After university Keogh spent time playing small Melbourne venues in the city’s inner-north and south, including a tapas bar where he met Mushroom Records co-founder Michael Gudinski. He played one of his first shows as Vance Joy supported by Nick Murphy (a school mate of Keogh’s more widely known as Chet Faker) and Ali Barter.

“I had no idea how the music industry worked, what a manager did as opposed to a record label,” he admits. “I’d play open-mic nights every now and then, play a little cafe slot.”

He spent more time writing than performing, earning the $700 it cost him to record Riptide through gardening and call-centre work. 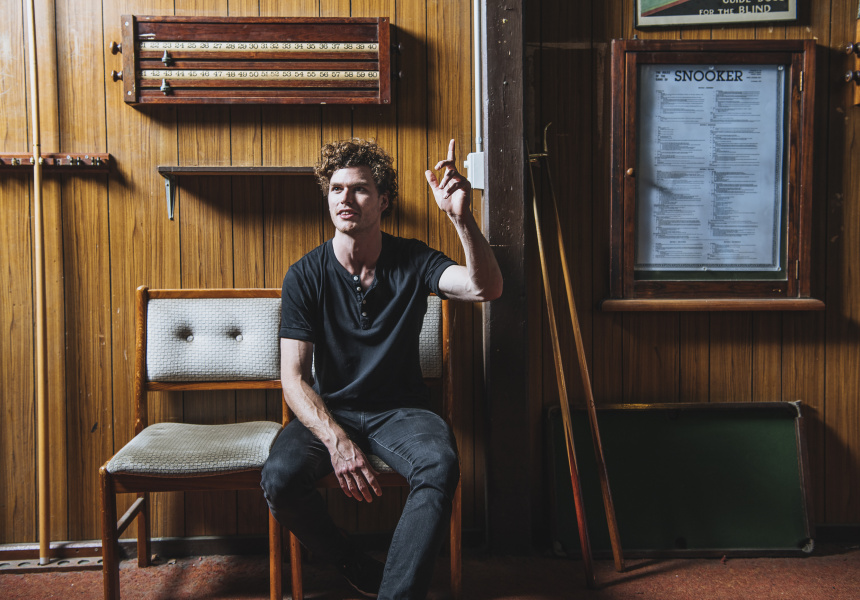 Keogh has had a relatively swift ride to stardom compared to the toils of many musicians. To some he could be viewed as another “white man with a guitar” – the kind record companies are perpetually willing to throw their weight behind despite a glaring lack of diversity in their catalogues.

It’s a fair question to ask of a singer who never really saw himself, in his own words “gigging hardcore, like every weekend” in the short years between deciding to pursue a career in music and landing a major record deal.

To his credit Keogh does his best to answer this awkward question.

“I get to stand at the front of the queue for a lot of things,” says Keogh. “I think I do have a privileged place in society.

“I’m privileged being a white guy, and Aussie and other things that can play in my favour.” 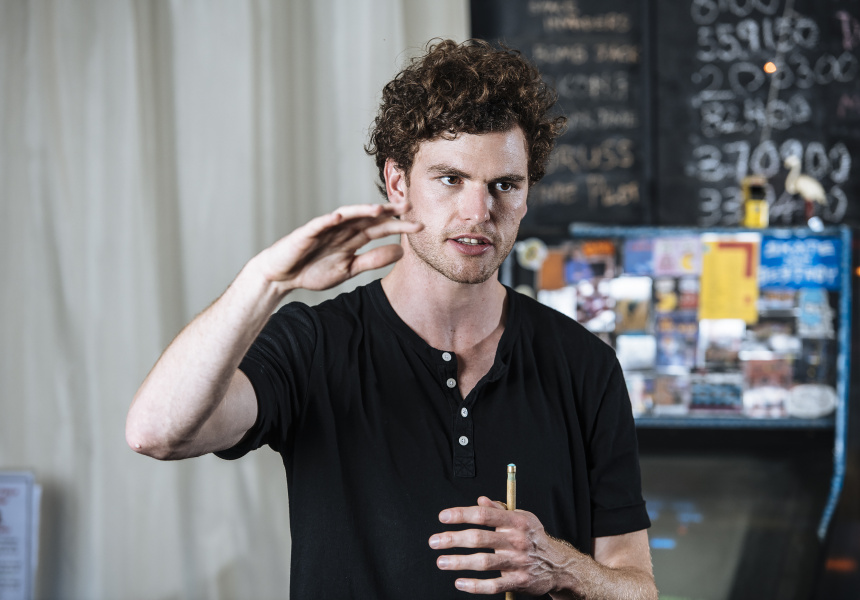 Keogh grew up in Murrumbeena, in Melbourne’s south. A few blocks away was Chadstone Shopping Centre, Australia’s biggest mall. There the Essendon Bombers-supporting teenager would walk past the rows of chain stores for hours just like any other teenager, stopping with his friends at a gaming arcade next to the cinema. He describes himself as the kind of kid who would stand to the side watching rather than grab the controller.

By all accounts Keogh was an upstanding student at St Kevin’s College, a private boys school in Melbourne’s leafy south-eastern suburbs. He walked students three years his junior to school, played footy, sung in the choir and in year 12 became school captain. That school produced another Tripple J Hottest 100 winner in the form of the aforementioned Nick Murphy, who took out the prize in 2014, the year after Keogh.

“I remember at lunchtimes going to the music room and picking up the guitar to have a jam and looking over at the piano and he was just hanging out playing covers of songs and singing,” says Keogh of Murphy.

As pointed out by writer Erin Riley, that’s still two more Hottest 100 wins, from one school, than have ever been given to a solo female performer in the poll’s history. (Three Hottest 100s later and that fact is yet to change.)

“St Kevin’s was a pretty straight-laced school, keep your hair neat and your socks up, private-school kind of discipline, but I guess there were a lot of opportunities despite that, like encouraging you to do music,” he says. “You were still given that space to be yourself.” 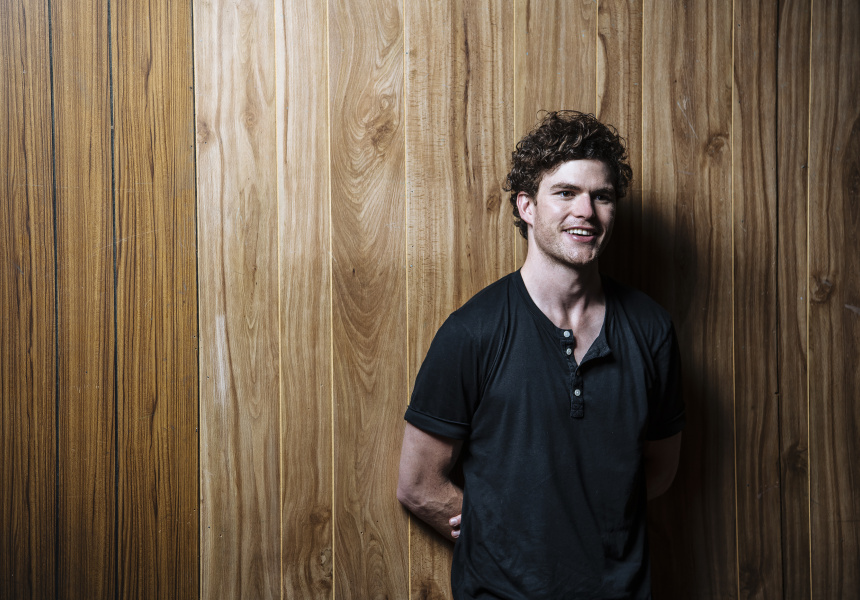 Creativity was also encouraged at home, whether it was learning guitar or dancing around the living room listening to Mustang Sally as a kid with his brother and sister. His mum is an English teacher and his dad a software engineer who was finishing up a stint as an aspiring actor when Keogh was born. From his earliest recordings up until now, Keogh has used his family as a sounding-board for new material before taking it to his record label. His mother’s love of words clearly seeped in. She even contributed the hook to Mess is Mine from Keogh’s platinum-selling debut album Dream Your Life Away.

He also frequently finds inspiration in literary sources, which he stitches together with memories and scenarios from his own life.

“I feel like when you read a book and think, ‘That’s a beautiful image’ there has to be something real about that,” he says. “I feel like that’s a good thing to merge with your own experiences.”

From an instrumental perspective, Nation of Two is full of rousing anthems, many of which follow a similar template. Strummed guitar rhythms give way to martial drums. Brass or string orchestrations are introduced, backed by huge multi-tracked vocals. Although risk averse, the bombastic crescendos are perfectly suited to filling a stadium.

“I always play E minor C, G, D and you can bang your head against the wall being like, ‘Why am I so predictable?’” he says. “There’s a part of me that wouldn’t want to change things up too much because you’ve spent so much time working on this sound. 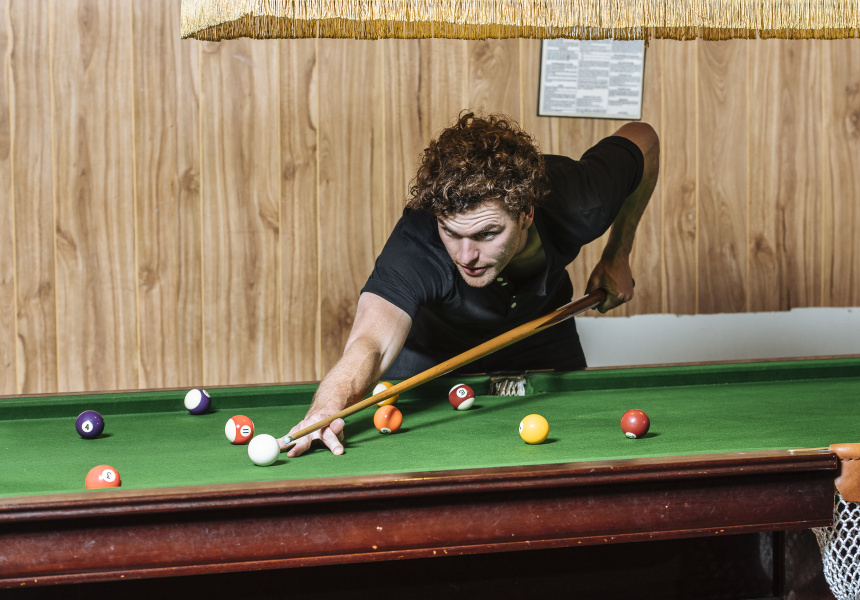 The best of Keogh’s songs are wrought with the feeling of devotion. One of my friends is convinced Keogh is a member of Pentecostal Sydney mega church Hillsong. A suggestion he takes with good humour.

“I’m not sure if it’s intentional. I guess if I look at songwriters that I really admire, like Paul Kelly or Nick Cave, [they have] often used the bible as a reference. [Paul Kelly] describes being in a hotel and picking up a bible and … finding beautiful patches. I’ve never done that, but I guess going to a catholic school, some of that stuff is there, you know, in my brain.”

Despite attending a catholic high school, Keogh isn’t religious. He does, though, see himself as a spiritual or at least philosophical person. The British espouser of Eastern philosophy Alan Watts is an influence. Keogh talks about one of the philosopher’s ideas involving a tree branch that collects snow – it either snaps from rigidity, or bends to release its load before bouncing back.

“I love that image … it’s like: ‘Be the water. Be the floppy branch’. There are things that are going to pile up on you and you can either be resistant and fight all the time, or not and find the path of least resistance.” 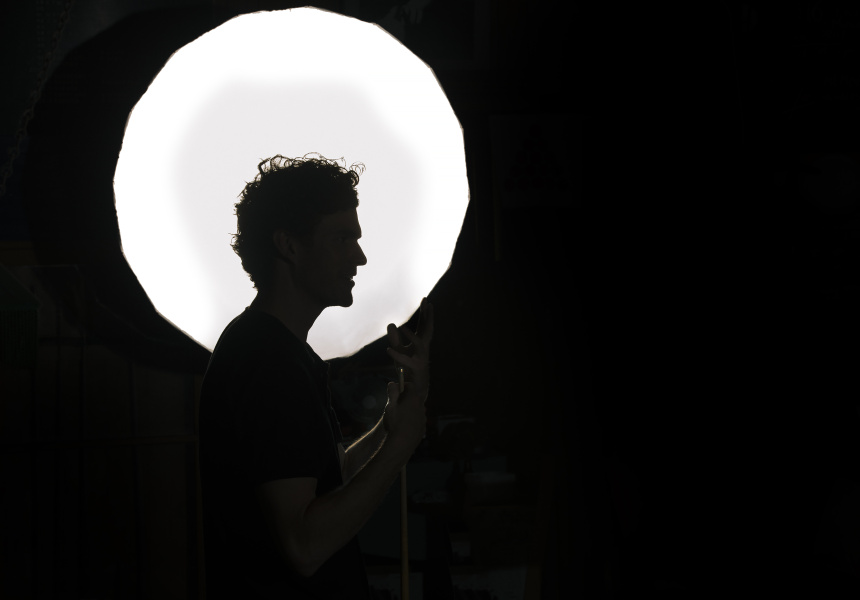 The night after our interview Keogh is playing a Spotify showcase at Fitzroy venue the Workers Club for the top 100 listeners of his music on the streaming service. He appears to be wearing the same shirt two days in a row. Even with a camera sitting virtually on his shoulder, his full attention is with his fans getting their souvenirs signed.

Jo Syme from Big Scary is MCing the show and alerts the audience to Keogh’s presence at the back of the room. “There he is,” breathes one reverent fan. On the way through the crowd Keogh gives a significantly shorter fan an awkward low five. It’s hard to say who’s to blame.

Keogh quickly has everyone laughing with an anecdote about Syme’s handsome brother. He brings up the film Call Me By Your Name and asks himself if he should be pursuing his music career or just quit and search for the love of his life. The first three rows of young women look at each other and nod.

The crowd sings the choruses of Riptide and Fire and the Flood. There’s pure joy on the faces of the diverse audience here, from a middle-aged couple, to four adoring young women in the first two rows. Even a stern-looking bloke who hasn’t smiled once lets out a little grin as he finishes singing along to Nation of Two lead single Lay it on Me. A fan behind me, with wide eyes and hand on heart at the end of the first song, whispers “It touched my soul,” to her partner.

It’s genuinely touching looking around the band room at the adoring eyes and beatific smiles in the crowd. Keogh is an open vessel that his fans can pour their hopes and desires into. It’s easy to see why his star is about to explode.

Special thanks go to the Red Triangle, Fitzroy’s home of killer pool and cracking milkshakes.