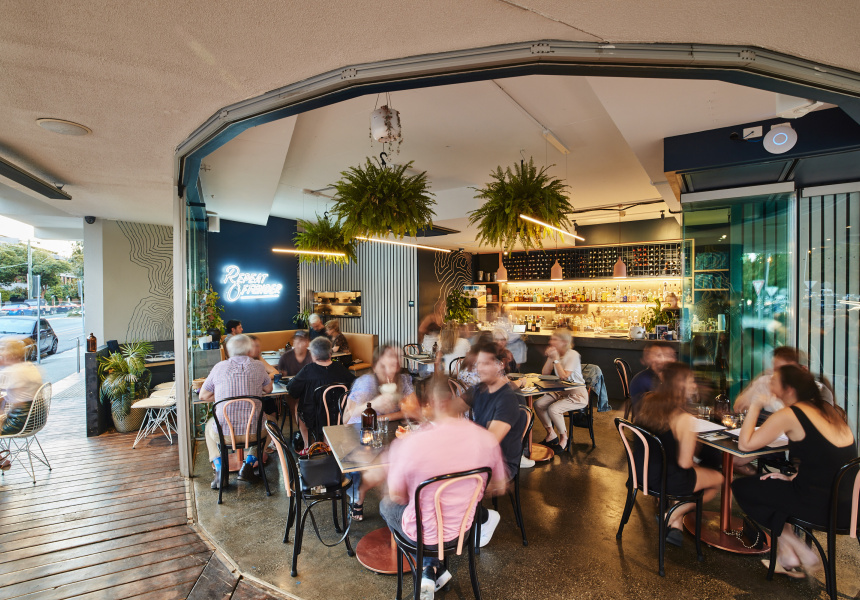 Before Covid, Jayben Newson was running a cafe at the junction of Ormond Road and St Kilda Street in Elwood. But, like for many restaurateurs, the pandemic was a catalyst for switching things up. For Newson that meant adding mezcal cocktails and tacos to the line-up to create Repeat Offender, a Latin-inspired restaurant.

To help bring Repeat Offender to life, Newson enlisted Mexican-born chef Adrian Gonzalez to create the menu, and partnered with some friends and other hospo people (Eli Bury, Taylor Granchi, Michael Woods and Alexander Greco). He also worked with local artist Buff Diss to paint his trademark murals on the walls of the airy eatery. Not that there are many walls – the glass doors slide back so the owners can invite the outside in.

The entire food menu is gluten free and about half of the dishes are vegetarian or vegan. The restaurant has worked with mushroom-based alternative-meat company Fable Food Co to serve lettuce boats and tacos filled with the chewy mushroom-based “meat”. If you eat dairy, there’s blue corn empanadas with mushroom, truffle and cheese.

There’s coffee from 8am till 12pm, but the boozy drinks are under the direction of Taylor Granchi. There are beers imported from Mexico and Guatemala (including Dos Equis on tap), a sizable selection of mezcals and tequilas (which are Granchi’s specialty), and a rotating menu of frozen Margaritas. Between 3pm and 6pm on Wednesday through Sunday, Repeat Offender offers happy hour specials including cheap tap beer or Moon Dog hard seltzer, frozen Margaritas, and $5 tacos.