Diners at Themis Chryssidis and Callum Hann’s stylish new restaurant can expect saucy degustations, bread with its own wine pairing and a dessert featuring 13 separate components. 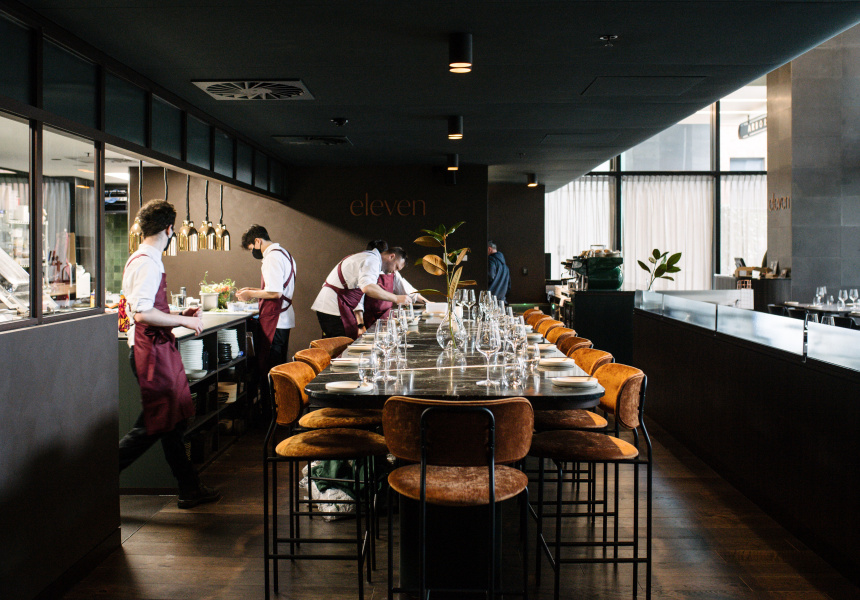 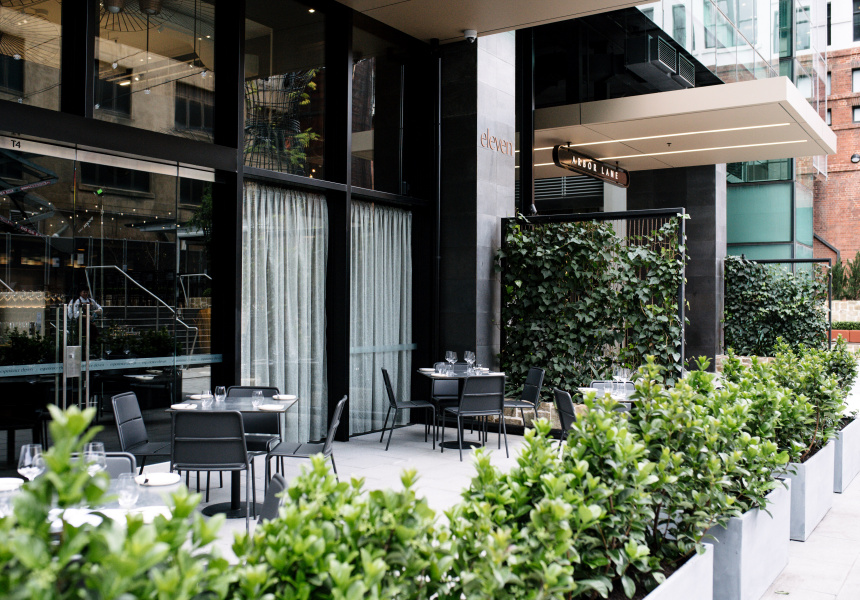 Most chef’s tables have eight, 10 or even 12 settings. But the best seats in the house at Themis Chryssidis and Callum Hann’s latest venture are the 11 spots looking into the large open kitchen. Located inside a courtyard at 11 Waymouth Street, the restaurant is also called Eleven but, “I think our obsession with the number 11 stops about there,” laughs Hann.

Natural light streaming in through giant plate glass windows illuminates a rich palette of forest green walls, brown banquettes that recall forest mushrooms and richly veined slabs of dark marble. “There’s so much natural light in here we needed to mood it up a bit,” says Chryssidis, who with Hann runs Sprout Cooking School, Lou’s Place at Lou Miranda Estate and an open-air cafe and bar (also called Eleven) that sits just outside the new restaurant.

And despite the name, the most important numbers are 13 and 17. That’s the number of dishes that hit the table for Eleven’s two degustations. The “taste Eleven” option features five courses drawn from the a la carte menu interspersed with snacks and palate cleansers, while the extended “experience Eleven” includes two additional courses.

Both start with a caramelised onion milk bun, chicken fat butter and chicken skin salt made from Nature’s Chicken’s robust, apple-fed chooks. The bread even has its own beverage pairing, a 2017 sauternes from premier cru Chateau Rieussec. Starting with a sweet wine is indicative of somm Geoffrey Hunt’s willingness to experiment with a wine list that includes an impressive selection of French options from champagne to chablis alongside more parochial South Australian matches.

The menu also balances contemporary Australian cuisine with French techniques under the watchful eye of Dan Murphy, who helped Hann get his first restaurant job at 1918 Bistro & Grill in Tanunda 14 years ago. “He taught me everything I knew back then,” Hann says with a smile, “and he's still teaching me a lot now.”

Sauces, jus and broths feature heavily in the produce-led dishes and Murphy declares them “paramount to what we do” at Eleven. So a square of brilliant white Murray cod is pan seared until the skin crisps and is served with several steamed open mussels, winter vegetables and a creamy beurre blanc sauce. It is, says Hann, “Quite a classic French dish but we sneak a little bit of yellow bean paste in there as well so you get this big whack of umami that rounds it out really beautifully.”

Calamari from Kangaroo Island, is thrown on the hibachi grill until one side is super crispy, then tossed through makrut (kaffir) lime oil with a touch of anchovy sauce, lime juice and lemon verbena that gives it a herbaceous kick and helps to cut through the accompanying hemp seed and rice milk crème.

Murphy’s influences aren’t solely French – his take on tortellini en brodo begins with small, bite sized agnolotti stuffed with Adelaide Hills goat’s cheese and creamed leek but, “The real winner is this really simple roast onion broth that goes with it – I could just drink it on its own,” he says.

During opening week, Murphy got his hands on some of Mayura Station’s highly sought after Wagyu that he immediately earmarked for the opening menu degustations. It’s a reflection of how dynamic the menu will be. The skirt steak is gently marinated before being run over the coals then served with roasted celeriac and almond puree and topped with a rich pepper sauce and sorrel leaves that Murphy forages on his drive in from the Barossa.

The result is rich without being overly complicated, though like many of Murphy’s creations its appearance belies the amount of work that goes into it. Twenty litres of stock is reduced to two litres over several days and turned into demi-glace, while the Wagyu trimmings are used to saute onions and garlic that is deglazed with marsala and port to create a classic French sauce.

Perhaps because he’s married to a pastry chef, Murphy knows the importance of finishing a meal on the right note and the desserts are every bit as complex as the savoury dishes and thrive on the interplay between sweetness and acidity with a hint of bitterness.

A perfect example is the pre-dessert palate cleanser that’s not even listed on the menu. Luscious egg-free Jerusalem artichoke ice-cream is perfectly cut by a drizzle of rich coffee essence and mandarin granita with a touch of passionfruit that sings with acid. It is, says Chryssidis, “A dish that challenges people but the experience they get when they eat it is comforting.”

The same could be said of the dessert centred around malted milk that Murphy uses for a creme anglaise before turning it into an “unctuous and delicious” ice-cream. That sits atop a rice milk cream with herbaceous Del Professore white vermouth granita, rhubarb puree and diced rhubarb cooked in verjuice to provide a hit of acid. Puffed rice rolled in white chocolate adds sweetness and texture while a pinch of salt and a hint of mint brings everything (in total 13 separate components) together.

Each bite introduces a different element to the experience, and the finished product combines nostalgia for childhood milkshakes with seriously interesting flavours and techniques. The dish distills what Hann wants to achieve with his latest venture. “There’ll be some takes on classics but we also want to push people slightly outside their comfort zone ... we want to blow people’s minds.”