Andrew Papadakis at the soon-to-be-Dino's site.

Andrew Papadakis, the owner of one of Adelaide’s best Greek restaurants, Meze Mazi, is opening a casual pita, beer and cocktail joint next door.

This is no greasy-spoon takeaway (not that there’s anything wrong with a 1am yiros run). Papadakis, who was born in Crete, will be serving up food inspired by his roots in a cool, informal dine-in setting.

“Here in Australia yiros has that stigma of late-night after-party food. [But] it’s not like that in Greece,” he tells Broadsheet. “I thought I’d do something on that path, but different.”

“The influence is Cypriot – that’s where they use pockets. But in Crete we do something called thrakopsomo – they’re very similar, but instead of using pita we use bread … where you take out the soft bit and fill up half a loaf, like a pocket. So it’s sort of a blend of both.”

Diners will also be able to order their fillings sans bread, on a plate. The menu is still being refined, but Papadakis promises a sweet pocket for dessert.

The petite 20-seat space will cater to dine-in and takeaway trade, with bar seating and tables for two. Papadakis has enlisted Studio Gram to transform the former antique shop into a contemporary Greek diner with clean lines, arches, stucco walls and ocean-blue detailing. Ben Ramsey (who’s worked on Gather & Graze and Jack Greens) is on branding.

Like Meze Mazi, Dino’s is about laidback Greek charm, minus the Santorini prints. “There won’t be any Greek music playing,” says Papadakis. “It’s Greek because I’m Greek.”

The drinks list will feature Greek-flavoured cocktails (with ingredients such as mastika and Greek vermouth); a house red and white made by First Drop wines; and beers on tap.

All going well, Papadakis plans to open a few of these shops around town. And he’s feeling quietly confident. “I think it’s going to be very, very good ... [and] very tasty.”

He also plans to team up with other operators for occasional collaboration dinners. His dream collab? Africola owner-chef and (one of Papadakis’s most vocal supporters) Duncan Welgemoed. “Imagine a peri-peri chicken pocket, phwoar,” exclaims Papadakis.

Dino’s is expected to open in early 2021 and will operate Tuesday to Sunday for lunch and dinner. 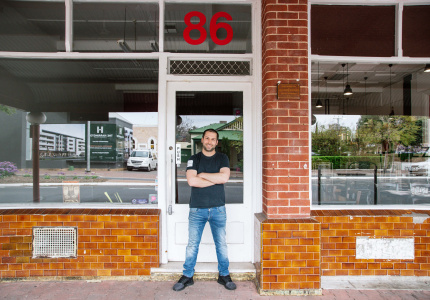