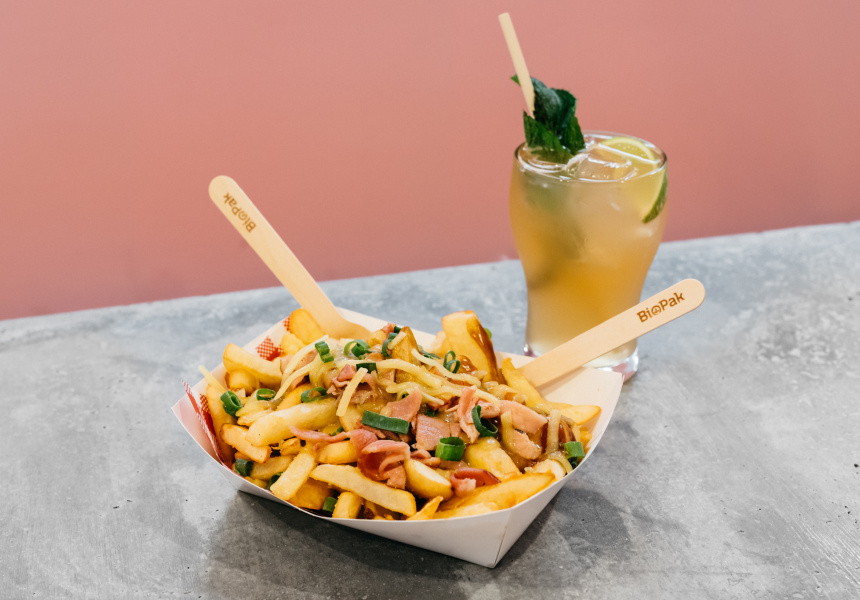 A star Gold Coast craft brewery travels up the Pacific Motorway to open in … Sherwood? True story. Lost Palms quickly became a Miami icon after opening around the corner from Miami Marketta in 2017 . You’d think, then, that its first Brisbane taproom might have been in Fortitude Valley or Newstead, or perhaps South Brisbane or West End.

Instead, owner Jarrod Blanning chose Sherwood – the bucolic southwestern suburb that’s thus far evaded Brisbane’s ceaseless gentrification. But that sleepiness (and a tighter sense of community) was attractive. He and his crew painted the site in their signature pink paint and installed a large concrete bar. There are also concrete tables inside and a series of high tables under the old roadside awning.

The bar runs 11 taps, with between seven and nine of them typically dedicated to Lost Palms’ popular brews, including its XPA, Gold Coast Bitter and 300 Days mid-strength ale. There’s usually a seltzer and a cider available too, alongside beer-based cocktails.

The large kitchen (a hangover from when the site was a restaurant, Sweet n Spice) is used to roll out a straightforward burger and snack menu, with some more experimental pub grub that uses the brewery’s own beers.