Describing the new wooden-wrapped Kengo Kuma building, The Exchange, in Darling Square as eye-catching is an understatement. “I was driving across the bridge [near the International Convention Centre], looked over my shoulder to change lanes and nearly drove off the road,” Chris Goffin, one half of hawker-style Sri Lankan eatery Hopper Kadé tells Broadsheet.

Coincidentally, 48 hours later Goffin and the other half of the operation, Ruvanie De Zoysa, were chosen as one of the 12 venues to open in the building’s ground-floor upmarket food hall, Maker’s Dozen.

It’s not their first venue – the duo found its feet on the market circuit before landing a permanent premises in Darlinghurst in 2018.

“This is more us,” says De Zoysa. “It’s the realisation of the actual concept. Everything to date has just been testing and making do to get to this point.”

De Zoysa and Goffin have designed a menu that uses Sri Lanka as inspiration. “We’re taking the joy of the spices and the flavours that make Sri Lankan food distinct and different from Indian [food], but we’re playing with it and making it accessible,” De Zoysa says.

One of the main differences between the two cuisines is that coconut milk is often used as a base in Sri Lankan cooking. This means there’s naturally less dairy and ghee in the cooking, which is good for vegans and people who are allergic to dairy.

The menu is divided into sections: kadé bowls (rice bowls), hopper boxes (hoppers are cup-shaped rice-flour crepes), curries (such as the twice-marinated and slow-cooked chicken Colombo curry, and the split-pea and potato dal with coconut curry sauce and mustard seeds) and stuffed roti.

The stuffed roti is as exciting as it sounds: flaky, buttery roti envelops fragrant rice, a house slaw, sambol (a coconut-chilli condiment), pickle and the choice of chicken, beef or veg curry. The parcel is nicely priced at $12.

You can opt for an egg to be cracked into your hopper (string hoppers are available too), which is made using a not-so-traditional slow-fermented batter, or just go with the curries and sambol.

Born in Africa and raised by her Sri Lankan parents in multiple countries, including New Zealand, De Zoysa knows her cooking has been influenced by more than just her Sri Lankan heritage. “I really challenge the definition of what’s authentic,” she says. Her husband Goffin chimes in: “I don't even know what traditional is anymore, but we don’t want to be it.”

This article first appeared on Broadsheet on September 10, 2019. Menu items may have changed since publication. 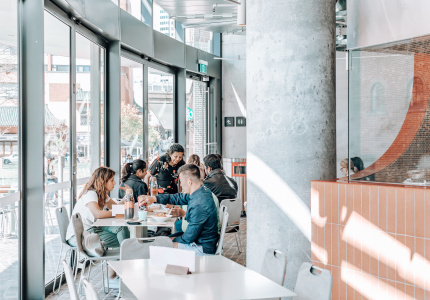