Bruce and His Chickens

On an idyllic farm in East Trentham, Bruce Burton is breeding a flock of special chooks, and Melbourne’s best chefs and butchers are taking notice. 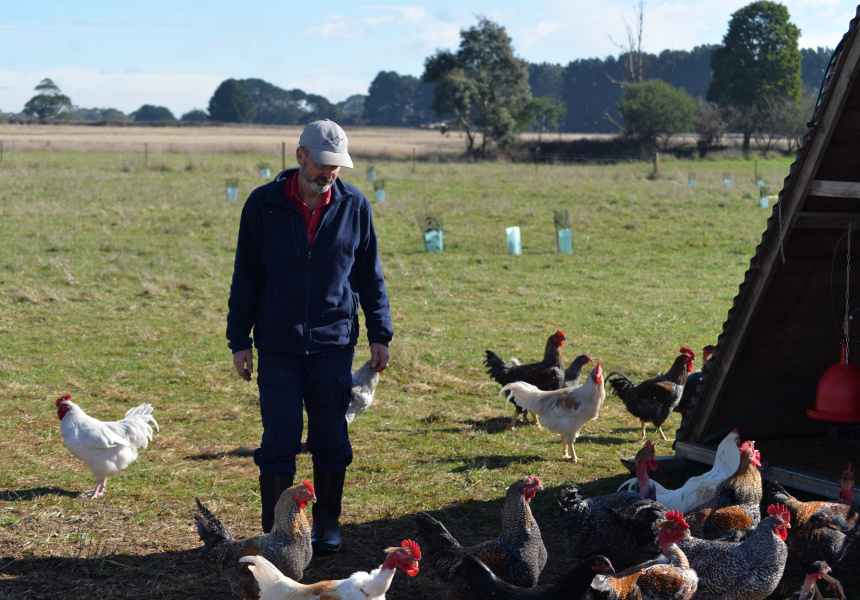 Early each morning Bruce Burton, and his border collie Gus, stroll around his East Trentham property, Milking Yard Farm, to inspect a number of triangular chicken sheds that are dotted throughout the 50-acre property.

Eight years ago, Burton followed the course of many nature-loving boomers with an itch for a tree change. He gave up his life as a Melbourne-based management consultant and bought a farm just outside of Daylesford.

“We woke up one Sunday morning and looked at each other and said, ‘where are we going for breakfast?’” says Burton, who bought the farm in 2009 with his wife Roz, also a management consultant. “The biggest decision we had to make for the week was where do we have breakfast on a Sunday morning. We were just bored to snores.”

Their first decision: what to farm? Before he was a consultant (and before that a pilot), Burton was a kid from a cattle farm in Southern Queensland. So he knows his way around a paddock. Chickens seemed the most logical bet. After all, he says, “you’ve got to have chooks on a farm.”

Then came the next decision: meat or eggs? Burton landed on meat, and then it became a matter of variety. That’s where the Milking Yard Farm story begins.

Australians consume more than 45 kilograms of chicken per capita each year (a third more than what they consume of pork or beef) and most of this centres on two varieties – Cobb and Ross. So, per convention, Burton bought a bunch of Cobbs, which were among “the only commercially available meat chicken in Australia” at the time, he says.

But then his Cobbs started to die. For months, he lost about a chicken a day – in the end about 80 per cent of his stock died.

“We went to Australia’s leading poultry vet,” he says, and the vet said, “listen to me, you’re an idiot.

“You need to pull out the runts and kill them, you need to go back to the stock-food store and buy some medicated feed” – feed that includes antibiotics.

Burton says chickens today can grow from zero to two-and-a-half kilograms in just five weeks with highly formulated feeds, which he says is “bloody rapid.”

“They’re super hybridised [and] industrialised,” he says, “bred to grow inside a big shed, to sit beside their feed. Their legs in proportion to their overall body size are too small, because they’re bred to have massive breast tissue. They’re not meant to walk very far.”

Burton calls this the “seedy underbelly” of the Australian broiler industry – that is, chickens reared to be eaten – buttressed by a pressure for cheap meat exacerbated by supermarkets. So regardless of the label on the packet, he says, Cobb and Ross are genetically ill-equipped to be free range.

“This free-range standard that we keep talking about, I believe, is really largely irrelevant. For me, it’s not good enough.”

Resolving not to medicate his wholegrain feed, Burton researched his options. Eventually, he stumbled on New South Wales chicken farmer Michael Sommerlad who had developed his own breed (called Sommerlad) by mixing several optimal species including Plymouth Rock, Indian Game and Light Sussex. Sommerlad had essentially created his own version of a super chook.

“He went looking for the best genetics in the country that he could find of the old dual-purpose all-meat bird breeds,” Burton says.

Burton himself started with around 60 Sommerlads in four coops in 2014, bred from parent stock he sourced from NSW. Today, he turns around more than 400 birds a month. He describes the birds as Australia’s answer to the coveted French Bresse chicken, and some of Melbourne’s best chefs, restaurateurs and butchers are fans.

Paul Wilson, for example, is using them in his signature charcoal chook dish at Wilson & Market, it’s on the menu at the Royal Mail in Dunkeld, and Andrew McConnell stocks it at his butcher Meatsmith.

While he’s not certified organic, Burton raises his chooks up to 16 weeks – right on “the cusp of maturity,” he says. (The Australian Certified Organic minimum standard is 70 days). This is a practice known as “slow meat,” which differs from the more conventional life span – about 35 days – that usually ends up in the poultry aisle. And Burton’s Sommerlads are huge, weighing between two-and-a-half and five kilograms by the time they rotate out.

Burton’s triangular coops – which are a couple of feet taller than he is and are rigged up with heating systems – are completely mobile and get moved around every week so his birds have access to fresh pasture. His Sommerlads are free to roam around the property, which Burton says they love to do. He planted a small three-acre patch of forest when he moved in, so the chickens can forage some of their food – which is good for their guts – such as grass, insects, seeds and even dirt.

So, what’s the allure of chickens that retail for between $27 and $35 per kilogram – roughly the price of a decent steak – compared to the average supermarket chook that sells for around $5 per kilogram?

Taste. Burton says Sommerlads taste like chicken used to, “back before it was industrialised.” Which for anyone under, say, 50 probably doesn’t mean much. But Burton says this means the meat is darker, particularly in the Maryland cuts, and that they have a richer fat content and stronger flavour. (A diner at Wilson & Market recently described the chicken as “being the most chicken-y chicken” they’ve eaten in recent memory.) Their skins are also thicker than your average chook, meaning crispier if done right.

"The Sommerlad chicken is like comparing Nescafe to single origin coffee," Wilson explains. "Texture, taste, moisture, purity of flavour – it's one of the best-tasting chickens in the world." He brines, then smokes his Sommerlads over apple wood at his South Yarra restaurant, before briskly blasting them in a wood oven.

$100 worth of free advice: even if you’re a gun in the kitchen, consider trying a professionally cooked version before you take a pass at home. Once you are ready to do it yourself, take a look at some of Burton’s recipes. Most important is to baste it generously with butter or olive oil, and season it well. You might also want to stuff it with a lemon and some thyme.

And cook with courage. The juice is definitely worth the squeeze.

Milking Yard Farm Sommerlads are available at the following Victorian restaurants and butchers: