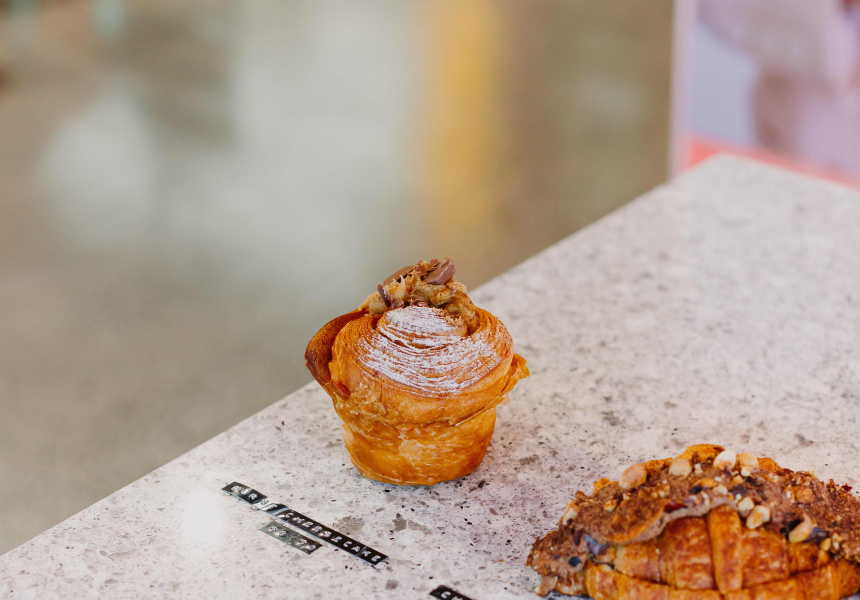 On March 23, in the face of the growing Covid-19 pandemic, the federal government announced the shutdown of all non-essential businesses across the country, including cafes, bars and restaurants. The next day, on March 24, Eddy Tice and Ania Kutek opened Superthing.

Tice laughs when he talks about the final days’ gestation of his West End croissanterie.

“We were pushing and pushing, and in the background this whole virus thing was going on,” he says. “We knew early on that this was serious but what can you do? We had bills to pay and builders to pay, so we opened the doors.

“But we were optimistic. If we were a fine diner, we’d have to pivot a lot. But because we’re a bakery with pastries, it didn’t change too much what we were doing.”

Thankfully, Superthing's range of baked goods was well suited to takeaway. On the menu is a tight range of immaculately prepared baked goods. There are croissants, of course – béchamel cheese and ham croissants, chocolate and hazelnut croissants, tiramisu twice-baked croissants – but also almond Danishes, zesty bitter orange custard cruffins and vanilla custard morning buns. The treats are washed down with Padre coffee and a short selection of smoothies and other cold drinks.

The shop’s Montague Road space is a looker. Tice and Kutek tasked Design Gallery’s Kirsten Schipper to take the clean aesthetic of their popular NYC Bagel and Deli cafes and dial it up to stun with an eye-catching pale pink fit-out. The walls are pink. The leather booths are pink. Even the ceiling, with its snaking, exposed air conditioning, is pink.

“The temperature is set to 18 degrees celsius,” Tice says. “That’s really important, so the butter doesn’t melt into the dough when you’re manipulating and folding it.”

It’s very much the ultra-modern, Instagrammable bakery – precise, provenance-driven and focused on doing a few things very well rather than being your neighbourhood bread shop. Indeed, instead of extending the selection of baked goods, Tice, Kutek and head chef Andrew Cameron have instead introduced a straightforward breakfast and lunch menu featuring takeaway friendly items such as poke sourdough toast with house-cured salmon, avocado, edamame and soy egg, and braised beef cheeks with truffle creamed polenta and heirloom carrots.

Otherwise, despite the awkwardly timed kick-off, Tice says West End locals have taken to Superthing and its luscious creations.

“After we opened they all came in and told us it was a really bad time to open, as if we didn’t know that,” he says, laughing. “But people have been so supportive. We’ve had regulars coming in every day, [teachers and parents] from West End State School have created a WhatsApp group encouraging [each other] to visit … We love West End. It’s such a good community.”