Plant karaoke, tomato “seed bombing” and a menu of salt-resistant plants – eight Australian artists take a look at what’s on our plates. 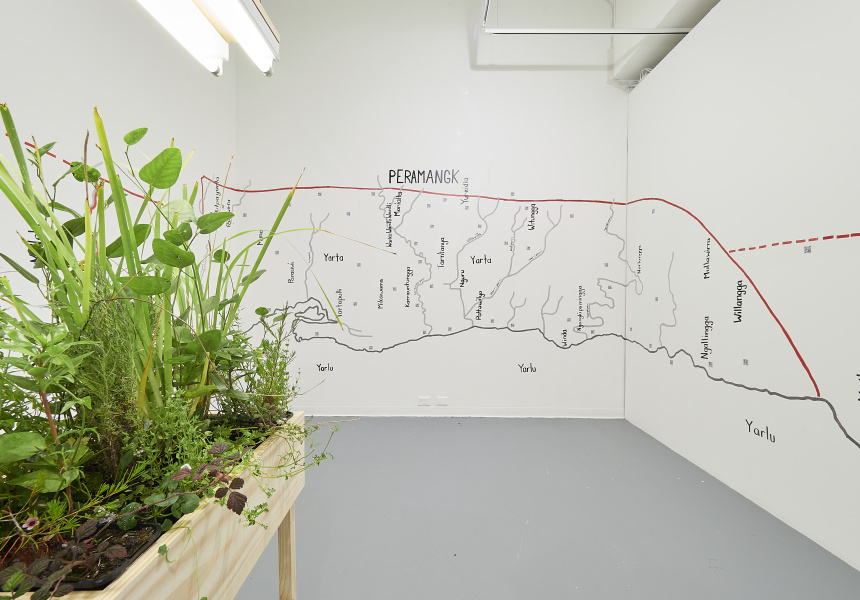 How do we know when we have enough to eat? It’s the question that inspired Plenty, a new contemporary art show at ACE Open. From food production and guerrilla gardening, to migrant labour and native ingredients, for the show eight Australian artists have taken a look at what’s on our plates.

“It’s so easy to disconnect ourselves from the impact of these kind of faceless global movements and the cultivation of food,” says curator Toby Chapman. “I guess it’s about thinking about what our responsibilities are, both individually and as a community.”

All installations are newly commissioned works with connections starting in Adelaide and expanding across the world.

Keg de Souza explores salt – a mineral, flavour enhancer and preserver – in The Only Rock We Eat. Her work with biologist Lucien Alperstein has manifested in a menu of plants that are drought-resistant or that thrive in saline-rich soil.

“[de Souza is] thinking about what our relationship to the land is, and rather than trying to change the land, changing our own behaviour in order to accommodate these shifts [in climate],” says Chapman.

James Tylor is cooking native foods such as tarnda womma (kangaroo) with saltbush and quandong for Mai: Contemporary Kaurna Food.

His work comprises three large-scale murals – mind maps and geographical indicators of indigenous foods – as well as native herbs and vegetables that will grow in the gallery. He’s also releasing a cookbook in early 2019.

James Nguyen’s On The Border of Things (Part Three) is a bilingual performance in English and Vietnamese, and a family reunion of sorts. Through food, Nguyen found connections between family members who were displaced across the world during the Vietnam War.

A long-lost uncle is working as a zucchini farmer in Adelaide, and cousins are cultivating coffee beans in Vietnam. But Nguyen unearthed some unsettling parallels: the zucchini farm recently learned of potential water and land contamination from fire-extinguisher chemicals used at the nearby RAAF Base, while those on the coffee plantation in Vietnam are experiencing devastating health effects from pesticide use.

“Every cup of Nescafe coffee you consume [is] actually part of a much bigger narrative,” says Chapman. “We’re really trying to kickstart that conversation.”

“What you’ll see in the gallery is only a small part of it because it’s basically a community project,” says Grbich. “The work is really located in lots of suburban gardens around Adelaide.”

The result? It’s a pretty tricky varietal to grow. Coles tomatoes are designed specifically to be grown in highly controlled conditions – no wind, pests or diversity. Put them in the wild and they’re “not particularly robust,” says Grbich.

By redistributing Coles tomato plants to the wider community, the artists put food production back in the hands of the people.

From backyards to the gallery, the installation showcases a photo book of the process from propagation to distribution, while a scrolling LED screen lights up with grower updates in real-time.

On Saturday December 8, the public program at ACE Open will show interactive works from all artists, including live cooking demonstrations, tastings, artist talks and performances. Urban Sun Project will be distributing tomato seedlings and inviting audiences to experiment with sound, speech and vibration (read: karaoke) to nourish the growth of the plants.

Plenty opens tonight at ACE Open. It runs until February 9.