After a six-week sprint prepping the space for Sydney’s first crowd-sourced venue, Stanley Street Merchants has opened its doors. 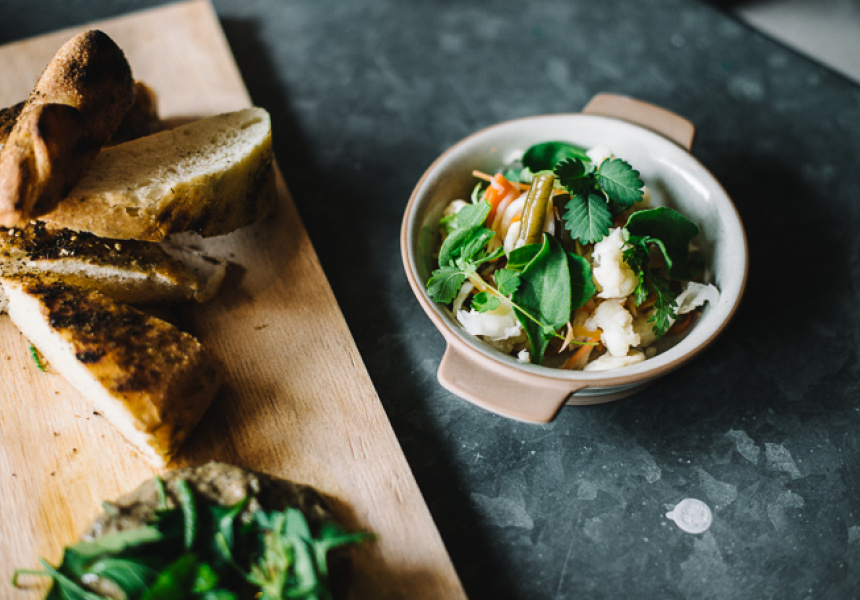 From last-minute kitchen repairs to menu swaps, flexibility has always been imperative for Stanley Street Merchants. The menu has seen considerable changes since the day the team was announced the winner of IconPark’s crowdsourcing campaign. “It’s all well and good to create a menu when you’re sitting at home on your couch,” explains executive chef Matt Stone, “but that’s not being seasonably responsible.”

Stone’s passion for local ingredients started in the early stages of his career at Star Anise in Perth. “I was constantly striving to find better-tasting produce. Once you start on this path of foraging native foods, you become really motivated to go harder and make conscious decisions.” There are more than 33 native ingredients on the menu at any given time and at least one special will be on offer each day.

The main space is clean and minimal. The bar counter faces directly into the open-plan kitchen where Stone, and head chef and co-founder Duncan McCance and their team are hard at work salvaging each and every piece of edible food possible. From drying corn husks which will accompany roasted chicken, corn puree and Jerusalem artichokes; to pulling individual segments of finger lime with a pair of tweezers to create roe-shaped bursts of tangy citrus to be placed atop giant, locally harvested Angasi rock oysters.

Set to open shortly, just past the kitchen you’ll find the door to Uncle Sal’s House of Cards and Dominos, only accessible via a daily social media password. Upstairs at East Sydney Distilling Co. expect to find intimate spaces that can be booked for dining or larger parties.

“Sydney chose this concept over five others,” says IconPark co-founder Paul Schell. “This empowered the consumers to say what they wanted. Bringing that vision to life has created a lot of passion behind the venue.”