A Dockless Electric Scooter Service Has Launched in Adelaide

Unlock for a buck, ride for 30 cents per minute. You might have spotted them over the weekend: vivid green electric scooters dotted across the CBD.

On Friday, Californian company Lime was given the green light to trial its dockless scooters in Adelaide, just in time for Fringe season. The temporary permit, granted by the State Government, will last until March 17, the Advertiser reports.

All it will cost is $1 to unlock your wheels and then 30 cents per minute once underway. Usage is much the same as dockless bikes — using the Lime app you locate a scooter, unlock it with a QR code and then take off. Once at your destination you park it out of the way and it locks itself.

The Advertiser report states the e-scooters can only be used in the CBD and riverbank precinct and must not travel faster than 15 kilometres per hour. Users must wear a helmet and travel on the footpath instead of using multi-lane roads or streets with a speed limit of more than 50 kilometres per hour.

The easy-access scooters seem like a perfect addition to Adelaide's Fringe season, when punters are hurriedly moving between shows across the CBD. Their long-term presence in Adelaide will be decided after the trial period. Hopefully they have a brighter future than dockless bike scheme, Ofo.

Lime's e-scooters are already in operation in Brisbane. The company has also trialled electric bikes in Sydney.

To use a Lime scooter, download the Lime app. 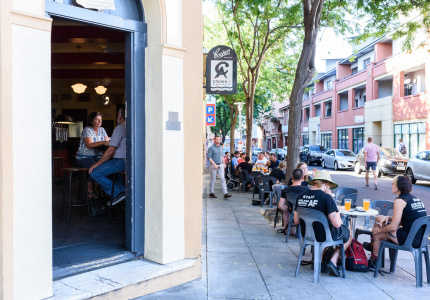