A charming, tightly curated retail space for small and independent makers from some familiar faces. When Karah Hogarth sold her popular Unley eatery Pickle in the Middle before the birth of her son last year, she was unsure of what her next step would be.

“I didn’t have any idea about what I might do next,” Hogarth says. “But it’s been a thought in my mind that there’s a little bit of a gap in the Adelaide retail market. I [wanted] to see a shop that is a pleasure to browse through and stocks things that have been carefully selected for the way they were crafted, or how beautiful or useful they are.”

Karah describes the space as a “general store” with an emphasis on small and independent makers producing quality, ethical and timeless products. Local, national and international makers are represented and many of the goods are available in Adelaide for the first time. Julie White, E Heid Ceramics, Good Studios and A.nouk are among the locals carried. Nationally, there’s incense from Subtle Bodies and ceramics from Public Holiday, and international offerings include bags from California’s Baggu and minimalistic Japanese homewares from Futagami.

To set up the space, Hogarth enlisted former Pickle in the Middle team members Jessica Perkin for branding, Amanda Eckart to work alongside Perkin and Hogarth in the store, and ex-Pickle head chef and former metalsmith Joel van Bussel for the fit-out. And the Pickle in the Middle revival doesn’t stop at the names involved; plywood tabletops that were used at the cafe in its early days are now repurposed in the store.

“When you get down to the nuts and bolts of putting a small business together, you touch base again with people that you know and that you’ve worked with,” says Hogarth. “The team we had at Pickle were amazing, and that was one of the things I missed the most when I sold the business. So it just came about organically.”

“We would love for it to become an Adelaide institution," she adds. "And we’d like to help lead the regeneration of King William Road, which is probably due for a bit of a freshen up. We hope in 10, 15 years to be going strong.” 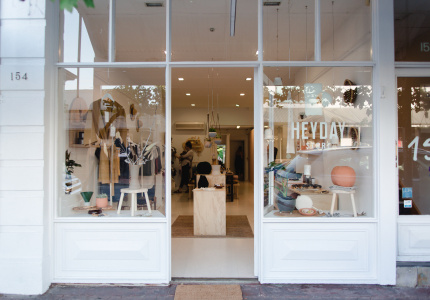