Get pantry staples such as salted egg cakes and durian crisps, or grab a seat among 200 other punters for charred pork skewers, tom yum soup, $10 boat noodles and Singha beer towers. And the fit-out? It came direct from Thailand in half a dozen shipping containers. 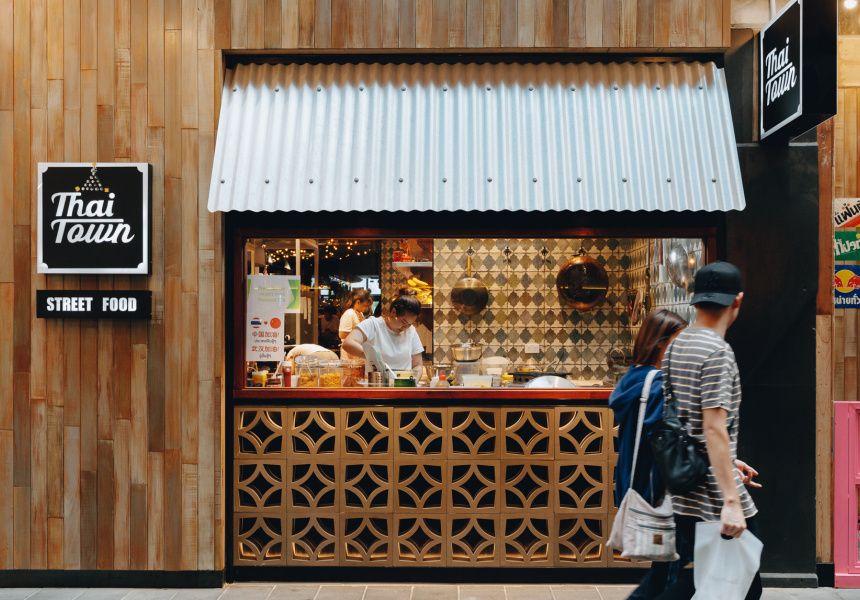 Suriya “Tee” Chantarungsarit and Dujja “Kae” Sereemanakij always visit Sydney’s Thai Town when they’re interstate. In Haymarket, close to the city centre, the little pocket of restaurants, groceries, shops and casual diners is a one-stop shop for Thai food and ingredients – you can find almost anything there.

Now the Thai-born, Melbourne-based restaurateur couple – who own a handful of casual Thai restaurants in shopping centres in Melbourne and Sydney – are aiming to replicate the experience here.

“There’s a bigger Thai community [in Sydney], so when I’m there I feel like I don’t have to fly home because there’s so much variety,” Kae says. “We wanted to bring that to the small community here.”

“Every time we go home, we head straight to the markets and food courts,” Tee agrees. “It’s not just 10 or 20, but a hundred food stalls. It’s the only place with so many options we know we can get whatever we’ve been craving.”

The couple’s buzzing new eatery opened in early January inside the CBD’s QV Shopping Centre. The space is divided into sections to replicate the streets of Bangkok, Phuket and Chiang Mai.

At the entrance, a counter functions as a mini grocery with salted egg cakes, brown rice crackers, instant noodles and durian crisps. It also serves khanom buang, or crepes with whipped cream and salted egg yolk threads, just like those found in Bangkok’s night markets.

Further in, you can peer into the open kitchen, and the space is dotted with decorative signs much like hawker stalls in Thailand translated into English: “Northern Food” on one sign “Gold Pawn Shop” near a display of knick-knacks and trinkets; “Beauty Salon” on a sign next to an image of scissors.

Most of the fit-out – from the ’90s advertisements on the walls and the wooden structures resembling Chiang Mai’s traditional houses, to the festoon lights strung all over and the large mural out front – was imported from Thailand in six shipping containers.

The couple’s goal is to serve a little bit of everything, and that’s reflected in the 98-item menu. Street-food was a must, so there’s chargrilled sausages; deep-fried pork intestine skewers; and quail eggs fried in crispy wonton wrappers. The boat noodle soup is already a bestseller – rice noodles in a fragrant six-hour cooked broth thickened with pork blood, with a choice of slow-cooked pork or beef. And at lunch it’s only $9.90.

There are quintessential Thai dishes, too – spicy and comforting tom yum that’s kept warm by a candle under your bowl; sticky pad thai with a generous kick of sour tamarind; and prawn-and-chicken fried rice served in carved-out half-pineapple.

For dessert, sticky coconut rice with mango is familiar, but try the lod chong: pandan-jelly noodles served with palm sugar syrup, coconut ice-cream and crushed ice. Kae says his team could make all the elements in -house, but instead chose to import a particular brand of noodles and syrup that is ubiquitous in Thailand because it tastes the most familiar and authentic.

“Our food is straightforward with no twists or adaptations. The flavour is the same as you’d find back home, because this is what we really eat,” Tee says. Kae nods, adding, “We’re serving the Thai community first. This isn’t Thai food for Western tastes; we’re making this for our own people.”

Thai beers include Singha and Chang, and you can get your Thai tea spiked with Bailey’s and served with a burning cinnamon stick which Tee says emphasises the spices in the brew. The Phuket Fantacy cocktail takes you beachside with rum, kaffir lime and pineapple juice and there’s yadong, a potent spirit akin to moonshine.

The 200-seat space is popular during the week, but you’ll find it tougher to get a table on Friday nights, which Tee and Kae dedicate to Thai expats. Live music, dancing, three-litre beer towers, dried squid snacks and more are designed to offer a taste of home. 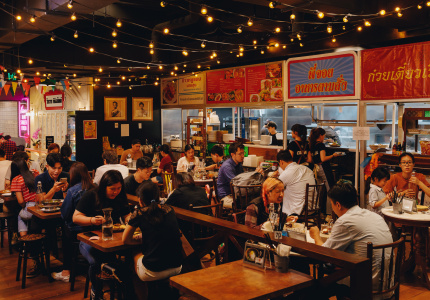