Converting an Icon: A Walk Through the Griffiths Teas Building

It’s one of Sydney’s most loved buildings, but also one of its most mysterious. Soon, it will be home to the city’s most anticipated restaurant: Chin Chin.

Chris Lucas has driven past the Griffiths Teas building many times before. The restaurateur behind Melbourne’s most successful restaurant (and a host of much-loved others) lived in Sydney during the ’80s and, like the rest of us, would marvel at the old warehouse that occupies an unusual triangular footprint on Wentworth Avenue, Surry Hills; its name built prominently into the parapet with glazed white bricks. “It’s one of the most beautiful buildings,” Lucas says. “It reminds me of the Flatiron Building in New York.”

The Griffiths Teas building is a striking Sydney landmark and a rare, local example of a late Federation-era warehouse. Now heritage listed, it was constructed in 1915, when Griffiths Teas – a Melbourne-based company founded in 1879 and one of first distributors of tea and coffee in Australia – was already a household name. The building was positioned strategically close to Central Station, its street-level shopfronts luring passengers in need of refreshment. In 1965, with the fortunes of Griffiths Teas having faded, the building (by now owned by the city council) was leased to an assortment of other tenants who sold everything from power tools to furniture and motorbikes. In the years that followed, the building was bought by property magnates Isaac and Susan Wakil, who became known for collecting disused industrial buildings in then-unfashionable parts of town and, for reasons that remained unexplained, leaving them vacant. The Griffiths Teas building itself lay empty for 30 years while the streets around it rapidly gentrified. In 2014, the Wakils – now in their 80s – began unexpectedly selling off their portfolio of inner-city properties, including the Griffiths Tea building, and have since pledged the $200 million raised by their sales to charity. And while it was announced that the top floors of the seven-storey building were being converted into apartments by the Cornerstone Group, it was the happenings at ground (and basement) level that got everyone talking: Chin Chin was coming to Sydney. 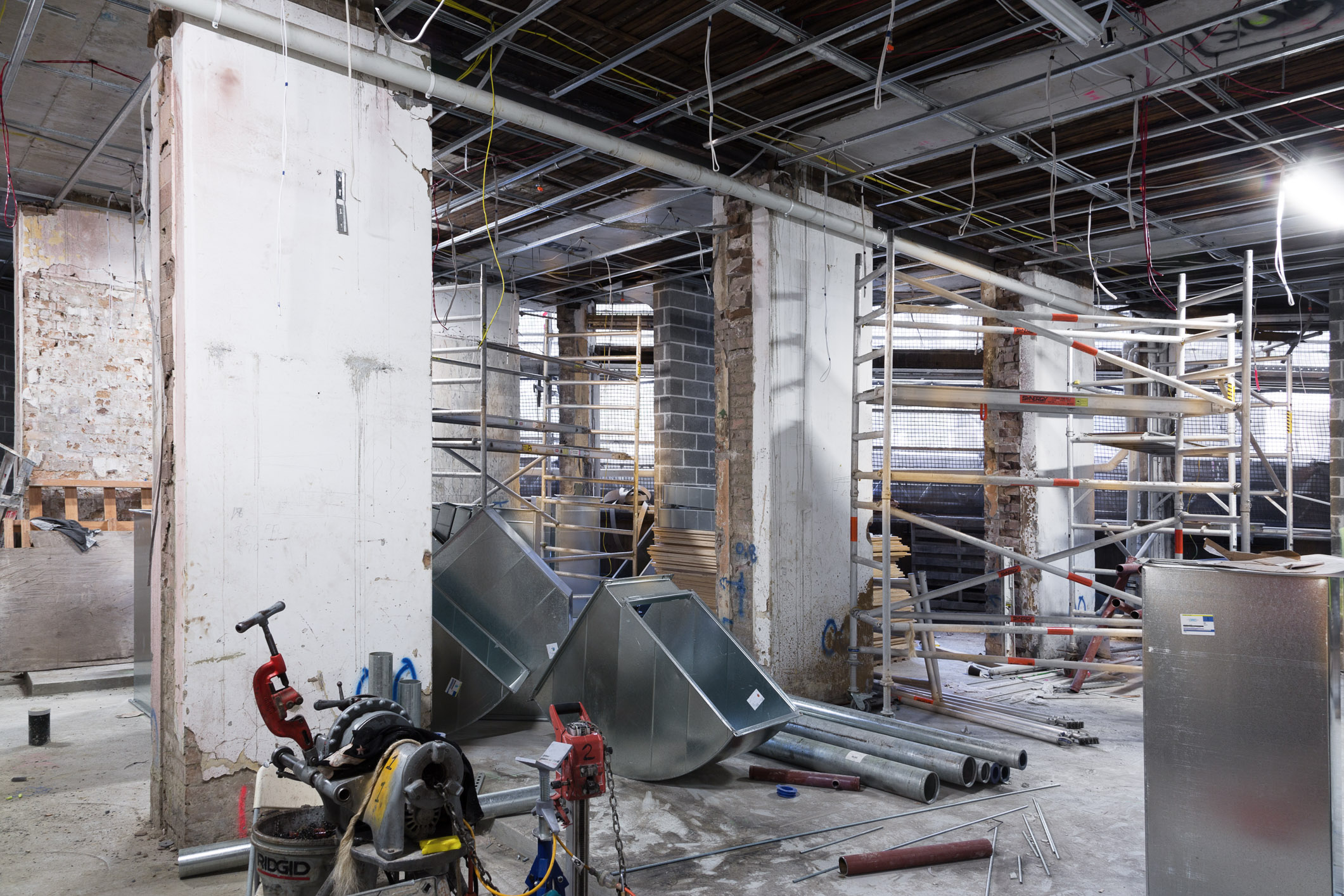 Chin Chin first opened on Melbourne’s Flinders Lane in 2011. A Thai restaurant with an inimitable atmosphere, it’s been on the pulse since day one, and still has the queues to prove it. Under the Lucas Group banner, its sibling bars and eateries – including GoGo, Baby, Kong and Hawker Hall – follow suit. So, how can Lucas, so in step with Melbourne’s culture, ensure his new venture not only reflects the strong Chin Chin brand he’s cultivated, but also the history of such an important Sydney building?

First of all, “I needed to find a Greek in Sydney I could work with,” jokes Lucas, the son of a Greek immigrant. In George Livissianis he found that and more. Livissianis is the interior architect responsible for some of the city’s beautiful and interesting restaurant designs, including Cho Cho San, The Apollo, Longrain and Billy Kwong. From day one, he and Lucas were on the same page.

Chris Lucas (head of the table) with his executive staff

“My brief to George – and he agreed straight away – was that we shouldn’t try to recreate what we’ve got in Melbourne.”

How to do this became clear the moment Lucas and Livissianis set foot inside. The flow of the ground floor and the basement lending themselves to the three parts – bar, restaurant, event space – that will comprise Chin Chin Sydney. “How it could work clicked with me straightaway, because it has three distinct feelings,” says Lucas, “and we’ve been able to work on that and evolve it.”

The design will be site-specific and executed with a light touch. Livissianis is mindful that Chin Chin (as opposed to the apartments above it) will most likely be the only part of the building accessible to the public. “We want people to experience the original parts of the site when they are eating and drinking,” he says. “So you’re always attached to the existing ceiling, the existing brick wall.” The first of these three spaces will be the cocktail bar, which is dark and flanked with natural brick and exposed timber. “We like the mood of the room as it is,” says Lucas. “It’s got a really nice feeling about it as an evening space. And so we’re just using the best attributes of what’s here and injecting what we need to.”

The adjoining main dining area is a bright airy space that’s painted white and benefits from daylong sunlight, which streams in from large windows that wrap around the perimeter of the building. It’s a larger dining and kitchen area than Melbourne’s Chin Chin, meaning there’s “space to play with,” says Lucas. “From a cooking point of view to do a lot of things we weren’t able to do before.”

Downstairs in the basement – where cocoa was once produced – will be an event space where anything from private parties to Thai cooking classes might happen. Timber beams that were once part of the ceiling lie discarded on the ground – Livissianis eyes them for benches, looking to tell the history of the building through subtleties. A matter of understanding the brand, and translating it to the space we’re in, the new restaurant will be resolutely Chin Chin in spirit and yet entirely of its place.

“Hopefully it’s going to turn out to be something really beautiful, that Sydney will be proud of,” Lucas says. “I can’t wait until we throw open the doors and see how it comes together.” Chin Chin will be taking bookings from September 25 and will open to the public on October 2.