Produced by Broadsheet in partnership
with Quest Apartment Hotels.

The idea of regularly travelling for work sounds like a dream. But the reality requires some prudent planning. In partnership with Quest Apartment Hotels, we speak to two experts in the field. 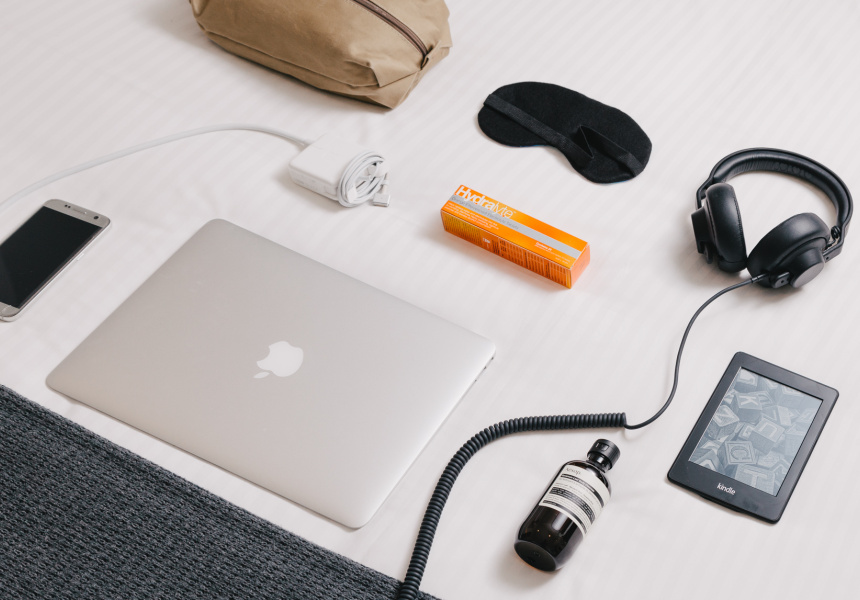 Simon Griffiths spends two to three months every year travelling the globe for work. The Melbourne-based CEO of Who Gives A Crap, a social enterprise that sells toilet paper to help fund development projects, Griffiths is accustomed to working wherever in the world he finds himself.

It helps that he enjoys travel, mostly for the people he meets along the way. “I’ve been lucky to build up a network of friends that live in the cities I visit regularly,” he says. “So I usually have a lot of fun too.” Home for Griffiths is Melbourne, but some of his favourite destinations are LA and Shanghai. “A night or two in either city is a great start or end to a trip.”

Jennifer Marshall sees travellers like Griffiths all the time. As the General Manager of Quest Apartment Hotels in the inner Melbourne suburb of Abbotsford, Marshall understands business travel can be especially arduous. “Business travellers are often pressed for time,” she says. “Efficiency is important to them. So they need an easy check-in and check-out process, and have their account settled in a straightforward manner.”

Griffiths and Marshall shared a handful of tips for making the best of regular travel.

Online, all the time

With the team behind Who Gives A Crap distributed around the world, Griffith’s says it’s important he stays in contact with them while travelling. “I always activate a roaming travel plan for trips under a week, and buy a local SIM with lots of data for trips over one week,” he says. “It allows me to be as accessible and productive as if I’m at home.”

Marshall says access to high-speed internet is one of the most common requests made by business travellers. “Often it’s not so much for doing work, but so they can FaceTime or Skype family back home,” she says.

Stock up on useful apps

Before setting off, Marshall recommends loading your phone with handy business travel apps, such as your company’s expense-claim platform app. “If you have an iPhone, download your boarding pass into the Wallet app,” she adds.

Griffiths says these types of apps are crucial to his work. “Almost everything I use has an iPhone app,” he says. “I stay on top of my workload using WhatsApp, Slack, Skype, Google Docs, Gmail and Facebook Pages and Adverts,” he says. “I also use CamScanner to scan documents on the run, Receipt Bank to record company expenses, and the Kayak and Ctrip apps to look at local flight options.”

He also recommends Gmail Offline, an “awesome” but “occasionally buggy” laptop and Chrome app that lets you read and send emails while you’re offline. “Super useful for getting work done on a plane,” he says.

Luggage – you don’t need much

Giant suitcases? You don’t need them, says Griffiths. To save time at airports, he only ever travels with carry-on luggage. “You don’t run the risk of your bags getting lost, and you don’t have to wait for them to be unloaded after you land,” he says. “With a backpack and a large overnight bag for my clothes, I can travel for a month and still have enough space to buy a few things.”

Pre-selecting your seat is a must, says Griffiths. He uses SeatGuru to find an ideal spot. “Some airlines block the best seats for high-status fliers until 24–48 hours before departure,” he says. “You can usually look up when they release seats on travel forums.”

If Griffiths has a long stopover, he checks for a pool he can access in the airport without clearing customs, usually found in the airport hotel. “It’s great to have a swim and a shower in the middle of a long trip,” he says. “Singapore has a nice outdoor pool, and Dubai has a good indoor one.”

Griffiths might travel with only carry-on luggage, but that luggage is brimming with portable accessories. A regular trip will see him carry two or three portable battery packs, cables, a four-port USB charger, a plug converter, and often an Australian power board. Other essentials include noise-cancelling headphones, Bucky eye shades (“so I can sleep on planes”), and a Kindle. He also says his toiletries bag has enough medicine in it “to cure pretty much anything”, including melatonin and Hydralyte to help with jetlag.

Explore away from work

Make time to explore a travel destination, however brief. Quest Abbotsford is located right near Melbourne’s Yarra River trail, and Marshall says the area makes for a “perfect, quiet antidote to a business trip. Most of our guests love getting out for a morning run or early evening walk.”

If in doubt about where to go, ask. “Locals always know the best spots,” says Griffiths, adding he’d love an app that aggregates all his friends’ suggestions. “Everyone has a list for at least one city,” he says. “It would be great to store all of that information in one place and be able to add to it and share it easily.”

The final tip before jetting off? Making sure you’re covered. “Buy travel insurance as soon as you buy your plane ticket,” says Griffiths. “Then you’re covered if you get sick before you leave.” There is a caveat to all those international business lunches, however. “Remember travel insurance doesn’t cover you if you’re drunk,” he says. “That can be an expensive mistake.”

This article is presented in partnership with Quest Apartment Hotels.

Book a room now for your next business trip.

Produced by Broadsheet in partnership
with Quest Apartment Hotels. Learn more about partner content on Broadsheet.