Zalloua taste-tested his way around the country to get inspiration for his new city diner. 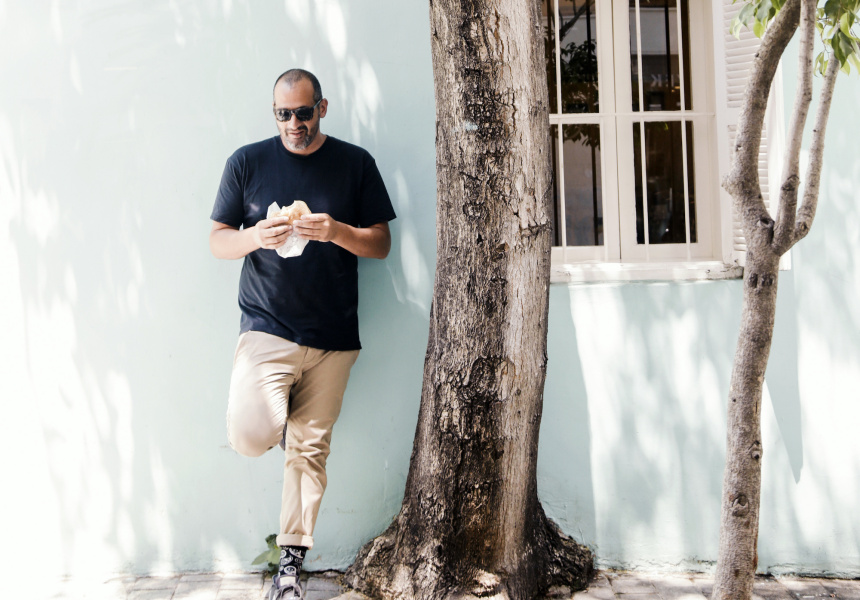 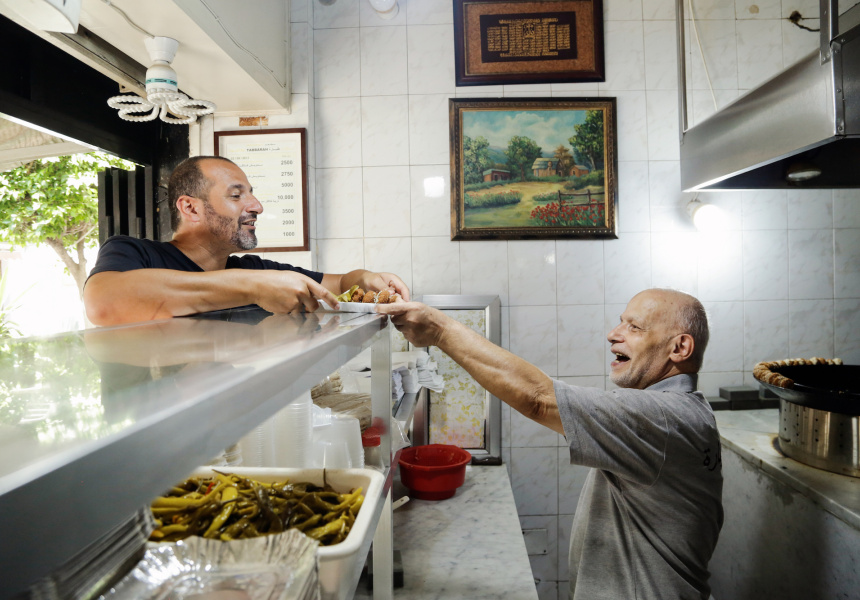 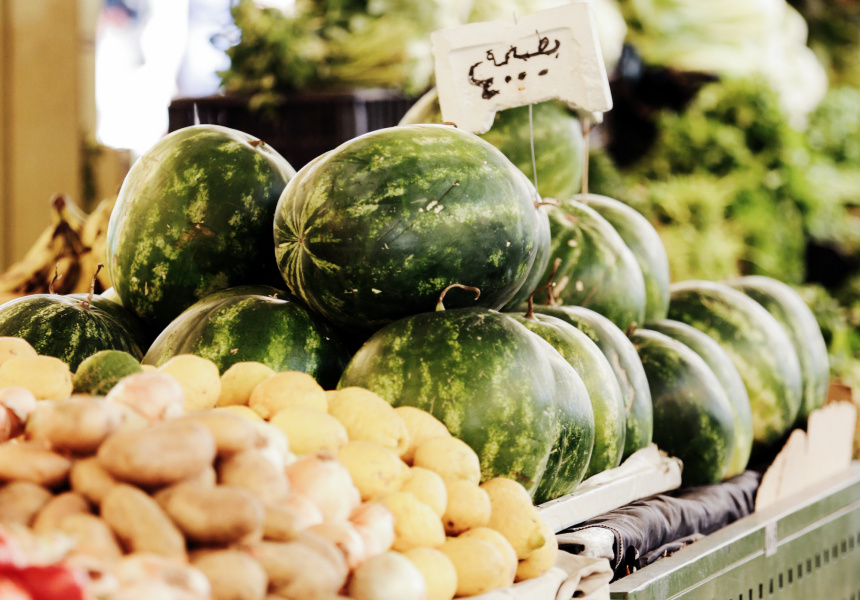 In the coming months, the Wynyard end of Sydney’s CBD will be undergoing a rejuvenation. The coming light rail is expected to bring more people to the top end of town, and, to take advantage, hospitality giant Merivale is launching a raft of new venues. A second outpost of Bondi Italian joint Totti’s will be the first to open, followed shortly after by Jimmy’s Falafel – a casual Lebanese eatery and bar opposite Wynyard station. The George Street eatery will be a takeaway joint out the front, and a bar and diner out the back. It’ll be vegetarian-leaning with a focus on legumes, vegetables and charcoal-grilled dishes.

Jimmy’s Falafel will be headed up by Simon Zalloua, an ex-Rockpool chef whose family moved from Lebanon to Australia 50 years ago. To prepare for his new opening, Zalloua travelled to Lebanon, seeking inspiration for the venue. If what he ate and drank in Lebanon is anything to go by, Sydney has something to look forward to.

Akra, Tripoli
“I always love visiting Tripoli. It’s Lebanon’s second-largest city and there is so much to do and eat. From [Brazilian architect] Oscar Niemeyer’s fairground to the old souks and street vendors. Tripoli is known for its amazing food, and one place that does it well is Akra, a restaurant serving mainly legumes and pulses, with so many different varieties of ful (fava bean stew), hummus and my favourite, fatteh: toasted pita bread, chickpeas, yoghurt and plenty of mixed nuts finished with burnt butter or ghee. I managed a quick look inside the kitchen – it was mesmerising. Such a great set-up of huge pots filled with fava beans and chickpeas, with hummus made to order.”

Anfeh Beach, Koura District
“This beach was exactly what I needed after days in the chaos of Beirut. [You walk] through a cemetery to get to the beach. This rocky coast was dotted with private chalets; the town was jammed with people enjoying lunch between swims in the Mediterranean. I spent my afternoon drinking Almaza [a Lebanese beer], eating fried whitebait and enjoying lupini beans that a retired local man had just rinsed in sea water.”

Falafel Tabbara, Hamra, Beirut
“I was so annoyed with myself for not visiting Falafel Tabbara earlier; all my friends in Beirut had boasted about this place. Wow. The falafel was amazing – small in size yet punching so much flavour. A simple wrap made with falafel, herbs, tomato and tahini, at 2500LL ($2.50), it was up there on the highlights reel. An added bonus – the owner had many great stories to tell.”

Hanna Mitri, Achrafieh, Beirut
“This little ice-cream shop is a true icon of Beirut. It’s famous for its Middle Eastern-style bouza, a chewy, textured ice-cream made of both mastic and salep [powdered orchid bulb], and it’s truly delicious. You could be forgiven for walking past this run-down building many a time and not knowing what is was, until you witness the line of devotees queuing for a scoop. All flavours are seasonal and made on the premises.”

Basterma Mano, Bourj Hammoud, Beirut
“I love how the wraps and sandwiches in Lebanon are so petite and light, not the overloaded greasy kebabs we usually associate it with [in Australia]. Basterma Mano is a perfect example – I would manage to eat three [wraps] per visit. My go-to wraps would be the soujouk (spicy sausage mix) that was somehow shaped into shawarma, basterma (air-dried beef similar to bresaola) and ma’anek (tiny spicy sausages). Teamed up with an ayran (salty yoghurt) drink, you would leave very happy.”

Rafic Al Rashidi, Sodeco, Beirut
“One of my all-time favourite breakfasts has to be knafe in a kaak (a ring-shaped bread). There’s something so satisfying about this cheesy, sugar-syrup-laden breakfast dessert sandwiched in a sesame-seed pocket. Rashidi does a great knafe, quite often running out because it’s so popular. As well as having a dangerous selection of baklava, Rashidi also makes moghrabieh (large Lebanese couscous). There’s so much to see in this neighbourhood, including the amazing Beit Beirut museum.”

Furn, Ras el Nabeh, Beirut
“A good friend introduced me to this bakery. It’s so hidden that you wouldn’t even know it existed. With nothing more than a dough mixer and a gas oven, this bakery cranks out some amazing products – most notably the sesame kaak (shaped like a handbag) and some delicious turmeric-and-caraway cookies. The kaak is best eaten with a smear of picon cheese or labneh and a sprinkle of za’atar or sumac.”

Zakhia Bakery, Zgharta
“There’s a strong family connection to this bakery: my mum’s grandmother opened it over 120 years ago, and three generations later it is still run by the same family. We were lucky enough to arrive around lunchtime on a Sunday. The majority of the time the bakery is pumping out flatbreads, but by mid-[Sunday] morning it becomes chaotic with locals and their trays of kibbeh [bundles of minced meat, bulgur wheat and spices] waiting to be baked for Sunday lunch. All types of kibbeh were being baked; my favourite is a sphere-shaped one filled with lamb tail-fat.

“With flatbread and kibbeh in hand we headed to my relative’s house just on the outskirts of the town, the house overlooking a gorgeous olive grove with the odd citrus tree dotted across the arid landscape. Family lunch was great, with meat skewers on charcoal, super fresh tabouli, potatoes cooked in olive oil and, of course, arak. I wouldn’t have wanted to be anywhere else.”

Jimmy's Falafel is slated to open in early 2020.