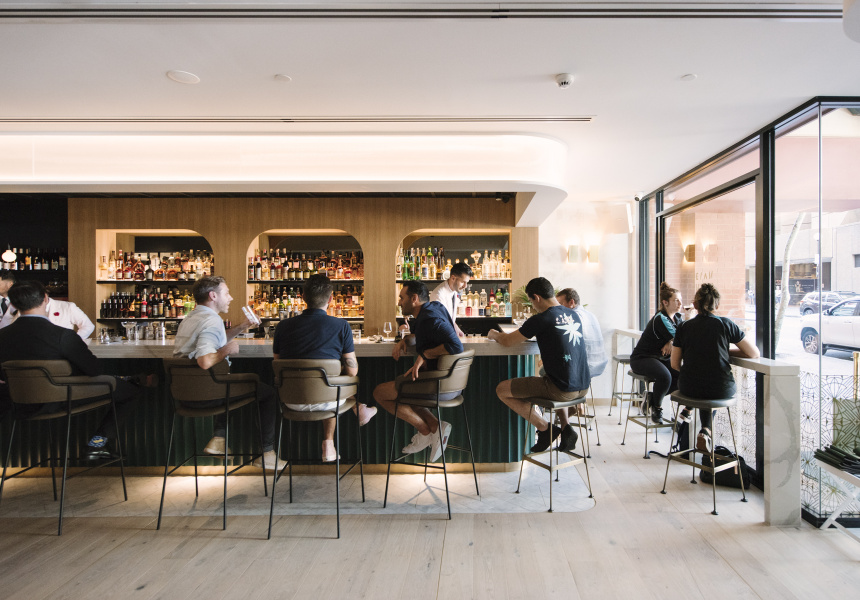 Co-owners of Maybe Sammy Stefano Catino and Vince Lombardo are known for pizza – they have two Maybe Frank pizza joints, one in Surry Hills and another in Randwick). But there’s always been a strong booze focus thanks to the group’s creative director, Andrea Gualdi, who won the 2017 Australian Bartender Of The Year award at the respected Diageo Reserve World Class Competition.

The space has plenty of green, pastels and gold, and bartenders kitted out in pale-pink dinner jackets. Like Maybe Frank, Maybe Sammy gets its name from old Vegas posters, which read: “Dean Martin, maybe Frank [Sinatra], maybe Sammy [Davis Jnr]”, referring to the singers’ reputations for arriving unannounced for Dean Martin shows. The cocktail list, designed by Gualdi, also features drinks named after famous locations on the Vegas strip.

It’s the show-stopping New Frontier that’s likely to get all the attention, though. The drink is made with Calle 23 Blanco Tequila, Derrumbes mezcal, fino sherry and apple, and is served with a clear inflated goon-like bag that’s popped on arrival to release a whiff of coffee essence and a scratchy that could win you a free bar snack.