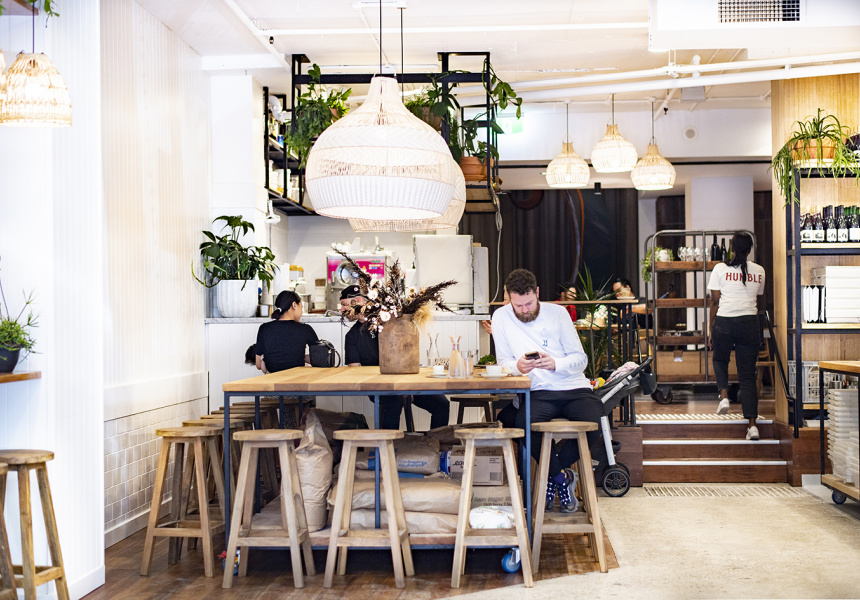 Humble Bakery is by Elvis Abrahanowicz, Ben Milgate and Joseph Valore. It's their fourth venue within a 200-metre radius – the trio have essentially taken over the corner of Holt and Gladstone streets in Surry Hills, where you’ll also find their other diners Bodega x Wyno and Porteño and Bastardo

Unlike refined Porteño, effortlessly cool Bodega x Wyno and old-school Italian beauty Bastardo, Humble is a daytime venue. Floor-to-ceiling windows at the front flood the space with sunlight. It’s been decorated in neutral colours, with occasional pops of cherry red, straw light fittings hanging from the ceiling and green plants and native-flower arrangements in just about any direction you look.

The first thing you notice is the entirely open kitchen – so open that you could go up to where the chefs are piping jam into hot doughnuts or kneading dough, have a chat, and walk away sprinkled with flour.

The menu is a delight – a happy balance of nostalgic bakery staples such as finger buns swiped with pink icing; baked-bean toasties; and pig’s head sausage rolls. There are five sandwiches – our picks are the eggplant parmigiana and roast pork numbers – and five bowls, including one with cured Tasmanian salmon, and one with roasted cauliflower. There are also cafe dishes such as avocado on toast and a hefty brekkie roll with two fried eggs, as well as an overwhelming selection of goodies at the counter.

Cake stands display olive-oil and fennel cake; baked cheesecake; flan and apricot tart; and spinach and ricotta pie. A glass case holds jam doughnuts, ham-and-cheese croissants and quince danishes, and shelves on the wall behind it show off loaves of freshly baked bread. You can get house-made gelato, too (daily specials include strawberry yoghurt and banana), made using the brand-new gelato machine in the bakery’s back corner.

In addition to what you’d expect on a bakery’s drinks menu (Mecca coffee, tea, and juice by Rainy Lane), you’ll find daytime cocktails such as the Humble Spritz, a Bloody Mary and Mimosas, and a selection of wines expertly put together by Lara Gray (who also helps assemble the drinks lists at the team’s other restaurants).

Grab and go or take a seat on a high stool at the big communal table right next to the open kitchen, at the bench by the window, or at one of the round Parisian-style terrazzo tables outside. Despite its name, there’s nothing humble about Humble Bakery.