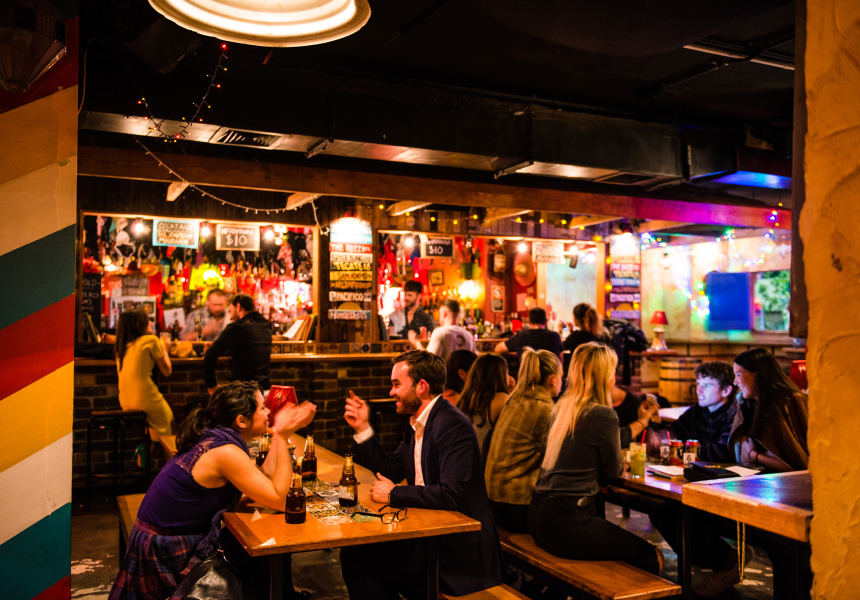 If drinking tequila in the presence of religious statues is considered blasphemous, ex-Shady Pines Saloon boys Jeremy Blackmore and Alex Dowd are committing some serious sacrilege with this homage to tequila and Mexican culture.

From the street, Tio’s looks more like a brothel than a tequila bar. A sleazy fluorescent light hums lazily in the front window, sending a beacon of green light across Foster Street.

Inside, Catholic shrines house saintly figures of the Virgin Mary, melted candles line the clay-washed walls and long strings of fairy lights burn a red hue over the darkened room. Behind the taco-stand-inspired bar, more than 100 varieties of tequila are mixed in with ceramic religious figurines.

Despite no official cocktail list, the skilled team of bartenders is quick to suggest a number of custom and classic cocktails (not limited to tequila). An additional quirk includes complimentary spicy popcorn served in brown-paper bags. Tio’s also offers beers from Europe, Australia and the USA.

In 2019, Tio's launched a simple, streamlined and delicious food menu. The star is LFP: Latin Fried Pizza. It's a bit like a pizze fritte (deep-fried pizza), with four different Mexican-inspired toppings (including chorizo) to match the tequila-heavy drinks menu. There are a couple of other snacks besides the LFPs, namely guacamole, served with chicharron (pork crackling).