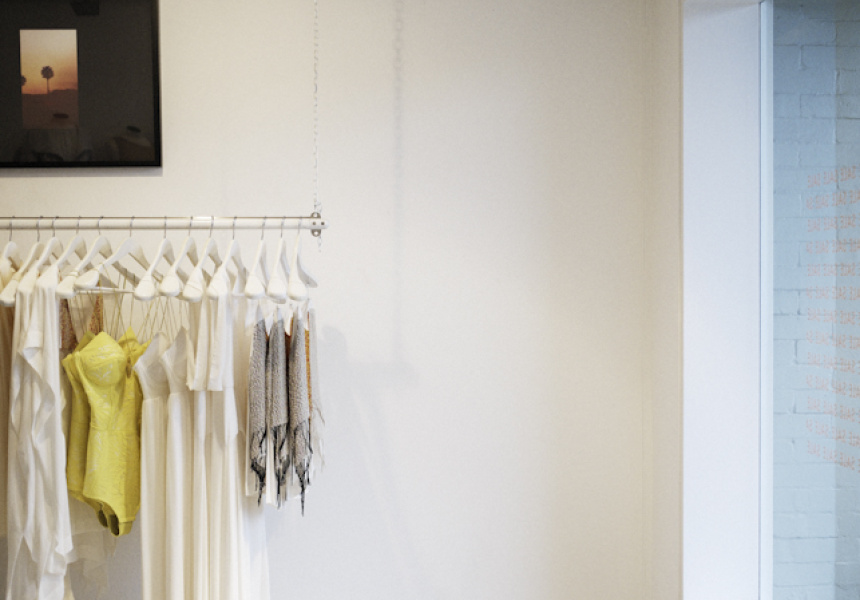 Local designer Kit Willow has been finely outfitting the women of Sydney in her signature intricate drapery, silk and corsetry via retailers since 2003 and later from the brand’s first flagship store, located in Paddington’s boutique strip, Glenmore Road. The label’s gallery-esque retail space will be joined by a second sister store in Chatswood Chase in early June 2012.

Willow is simultaneously feminine and architectural, combining flowing fabric with structure and texture to create utterly wearable art. Covetable pieces hang from racks that are suspended from the ceiling and tempt shoppers as they peruse the light-filled, tastefully designed space. Striking designs in rich maroon and dark blue are purposefully punctuated by timeless black, with the designer’s style of creating art-infused fashion, evident in both the garments and the store’s carefully curated set up. You might find neon lights in the shape of words hanging on the walls in one store and stark white flowers in milk bottles next to sorbet coloured heels in another. In a clean, stark white environment, these elements add some liveliness to the atmosphere and compliment the garments.

Willow has managed to embrace Australian sensibilities whilst also appealing to an international audience; the label is successful everywhere from Paddo to New York, Asia, London and the Middle East.