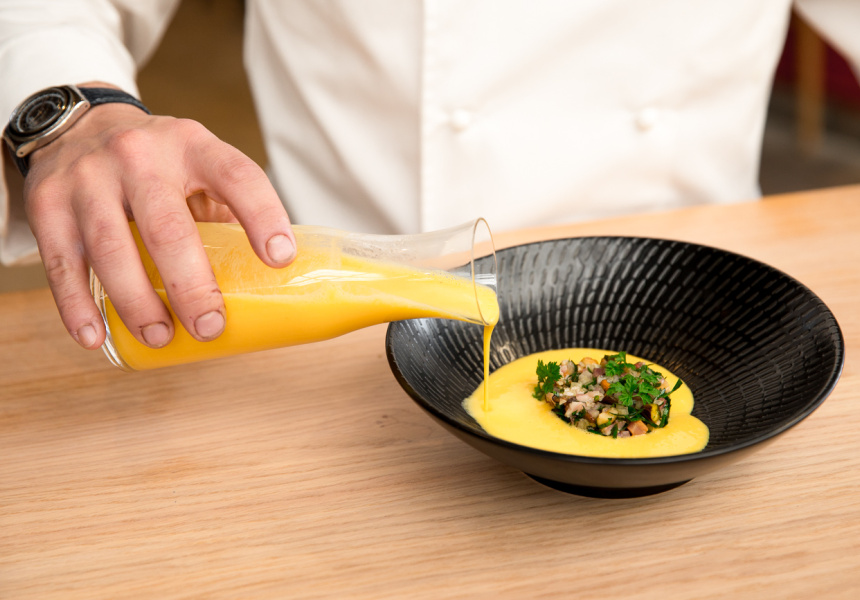 It’s nice to meet someone who’s completely and unreservedly engaged in what they’re doing. For Vincent de Soyres, it’s about beer; Thomas Cauquil it’s about charcuterie.

The two friends spent the better part of a decade thinking, talking about and planning what became their Rosebery restaurant and brewery, Frenchies.

It has a core range of five beers, each focused on a different terroir, including a German kolsch, a New Zealand pilsner, an American pale ale, an old world IPA and Australia red rye ale. They’ll have eight of their own brews on tap, and 16 bottles – half Australian and half from overseas.There's also Australian wines from organic and biodynamic producers, and premium spirits.

Cauquil plates up a seasonal, daily-changing menu in the dining room upstairs, with six entrees, a handful of mains and a couple of desserts. It's French bistro style here: so there's a heavy focus on well-executed sauces.

Frenchies is at the centre of Rosebery’s Saporium development. On the ground floor you can sit at a long bar, which looks into Cauquil’s surprisingly small kitchen, or at one of the high tables, which look onto de Soyres’ brews in progress. Take a moment to look at the carpentry too, it’s all by de Soyres’ dad.

The upstairs mezzanine is more of a traditional restaurant. The light timber dining tables and an open-air design (which allows light to flood the space) make it feel very casual.