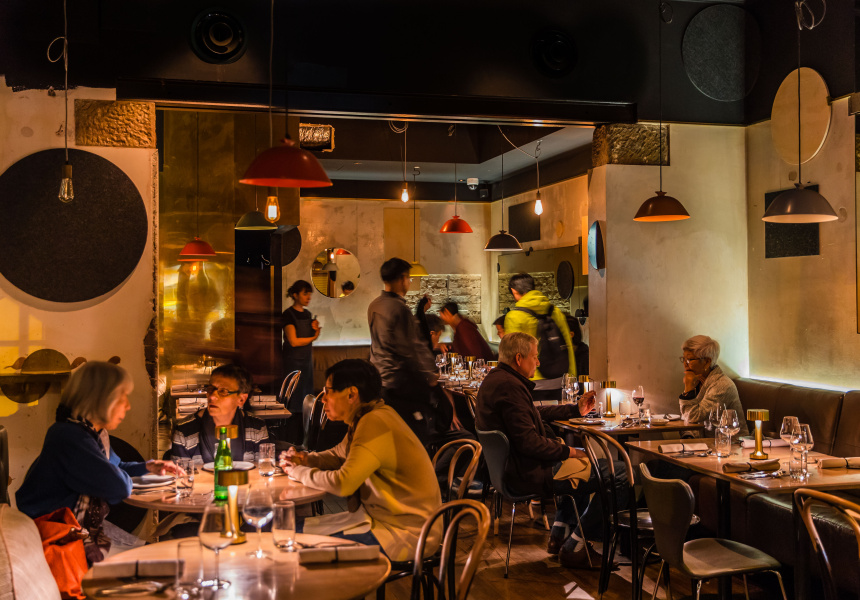 The golden yellow terrace that sits midway down Macleay Street in Potts Point was once a gallery, exhibiting work from some of the city’s most fabled and famous artists. Later it became an artist residence, described as the very culmination of Sydney’s underground scene in the early '70s, and counted Brett Whitely, Ellis D Fogg and George Gittoes as members.

These days, the team behind lauded venues Bentley Restaurant & Bar and Monopole is making its mark on the historically colourful landmark with Yellow, a restaurant entirely focused on vegetables.

Yellow first opened in 2014. In early 2016, it made the switch to become Sydney’s first fine dining vegetarian and vegan restaurant (excepting the famous weekend brunches). Unlike other vegetarian places in Sydney, though, this isn’t based on ethics. It's about making vegetables taste incredible.

Service is a la carte every day except Saturday, where you'll choose between five- and seven-course tasting menus. Expect neat-looking plates with seemingly simple combinations such as fermented pumpkin, pepitas and persimmon; broccoli, mustard and native lime; and eggplant, corn and black garlic.

In keeping with the switch to vegetables (which is very now) the wine list has an eye on the future. If bottles from Australia’s most progressive producers can’t scratch your tannic itch, the restaurant also has access to Monopole’s 500-entry list.

Melbourne designer Pascal Gomes-McNabb is responsible for the interior – a softly lit dining room with accents of canary, mustard and saffron.