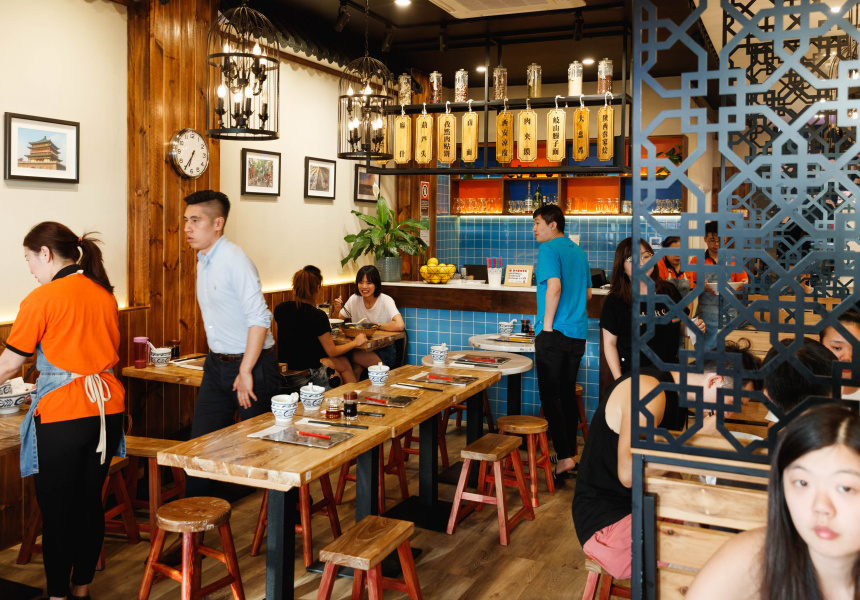 At Xi’an Eatery the signature is biang biang noodles. You can see the enormous bowls on every table, each filled with noodles so wide and thick they fold over each other like ribbons.

These noodles were originally a high-energy staple of the working class in Shaanxi in north-west China. Now they’re a cheap fast food loved all over China and, increasingly, in Sydney.

Xi’an Eatery makes its own noodles daily (including a less common pale green variety blended with spinach) and serves each bowl traditionally – with a final splash of searingly hot oil. It burns the chilli on the noodles and brings the flavour out.

All the ingredients are placed on top to get that final scorch, but they shouldn’t be eaten like that – you’re supposed to mix it, for flavour.

Other Shaanxi dishes on the menu are roujiamo (a doughy pita pocket-shaped bun typically filled with fatty pork and sometimes coriander or green capsicum); liangpi (a simple cold salad of noodles, cucumber, roast chilli oil and spongy cubes of wheat gluten); and a hearty lamb soup served with vermicelli noodles and a side of doughy bread to dip in the soup.

There’s also the semi-sweet dome of sticky rice with red bean paste wrapped in rolls of cured pork, and the intensely rich marinated pork hock, and the sour but spicy soups. All very specific to the Xi'an region.