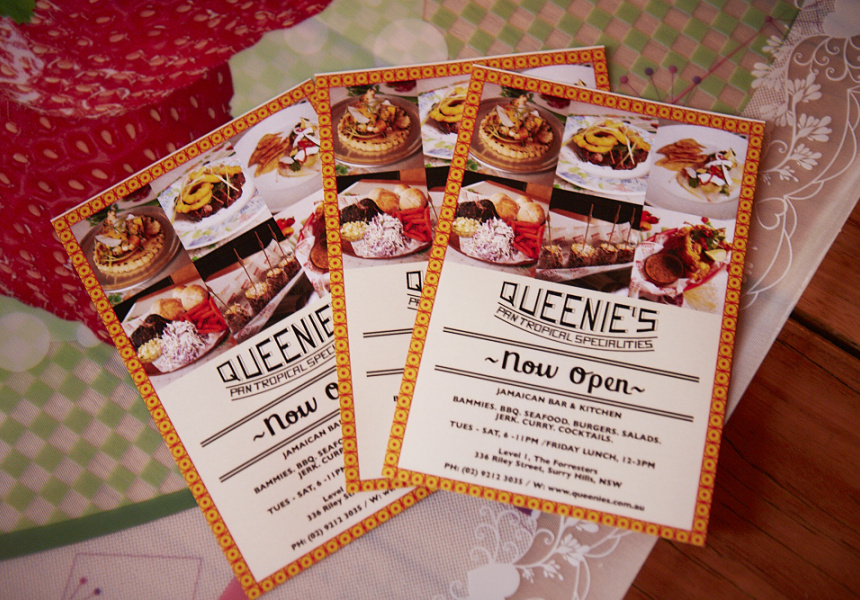 The Drink & Dine Group – owners of The Flinders, The Norfolk and The Carrington – have transformed another formerly underused space atop one of their pubs. In this case, it's The Forresters. And this time, it's a Caribbean-themed diner offering pan-tropical specialities.

Kitsch doesn't even begin to explain the interior design at Queenie's, which was fitted out by Michael Delany, who has worked on most of their other interiors. There's dark wooden floorboards, circular lamps suspended from the straw-thatched ceiling, flowers everywhere, a feature wall dominated by a large tiger's head and pictures of tropical beaches, former Miss Jamaica entrants, colonial buildings and a young Viv Richards, who seems to almost act as the restaurant's mascot.

At the bar, they're serving Red Stripe, Tecate and Dos Equis beers. On the cocktail front, a Red Alert has rum, Creole Shrubb, red hibiscus, mint and crushed ice. A Zing Ting A Ling is made with rum, Fernet Branca, espresso and caramel coconut cream. A Jamaica Nice with tequila, St Germain, Licor 43, blood orange and lemon and bitters would only be better if you're were drinking it on an uninhabited tropical beach.

When you need something to start soaking up all that liquor, there's barbecue jerk corn, fried plantains and calypso coffee ribs. For heartier eats, there's barbecue jerk chicken with jungle slaw, curry goat accompanied by dirty rice and a jerk pork burger with a side of slaw and sweet potato fries. If you've got room for sweets, try the Kingston Kreme donuts, Brixton Mess or the Cooldown Colada with rum-poached pineapple, coconut sorbet and praline.

If you've got the tropics on your mind, all roads lead to Queenie's.