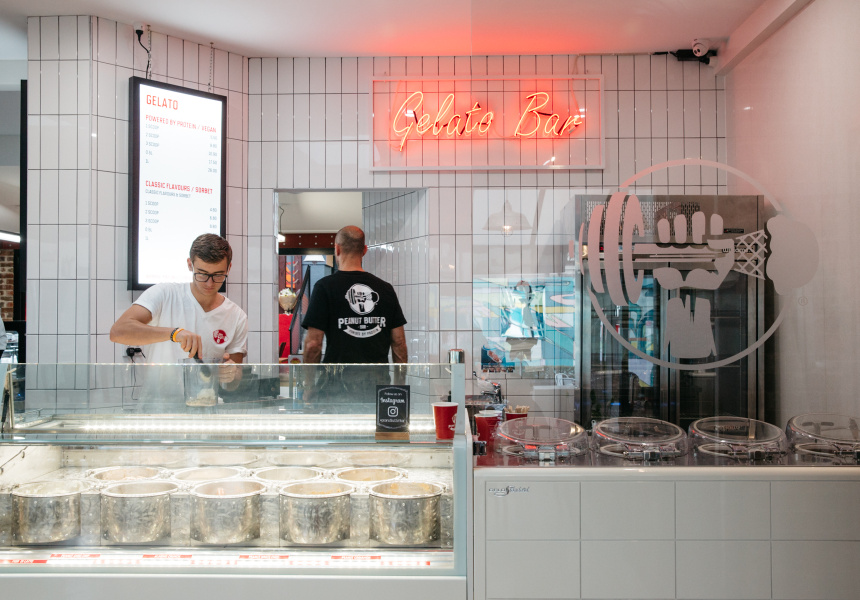 The gelato at Peanut Butter Bar is split into two categories. On the right, a high-protein, low-sugar secret recipe that took eight months to develop. Flavours like fior de latte and peanut chocolate chip are made with a nut butter or jersey milk base. On the left, you’ll find the real thing: traditional gelato flavours like peanut butter salted caramel brownie, pistachio and Mars Bar.

Healthier versions of traditionally unhealthy menu items sitting alongside their alternatives is a running theme here, where “indulgent wellness” is the food philosophy.

Most dishes start with a peanut butter base, and husband-and wife-team Christine and Nagib Elbakht have partnered with Californian-based Buff Bake, a natural nut butter brand that is made without sugar, preservatives or hydrogenated fat.

There are protein shakes and “cheat day” shakes; house-made brownies and puddings with a sweet potato base; prune, yogurt and almond pancakes; and even a salted peanut butter and chocolate chip cookie, served hot from the oven in a skillet with protein gelato and warm, “liquid gold” peanut butter poured over the top.

Most menu items are gluten free, and there are plenty of options for vegans too, including a roasted almond gelato and coconut milk strawberry cheesecake.

The interiors have an old-school industrial gym feel, reflecting the owners’ love of the 1976 film Rocky, with floor-to-ceiling murals of Muhammad Ali and Arnold Schwarzenegger on the walls alongside motivational quotes. A replica boxing ring will host DJs in summer, as projections of old Rocky films and classic fights play in the dining area.

Coffee is by Melbourne’s Cafe Mio, and turmeric and matcha lattes are on offer too.