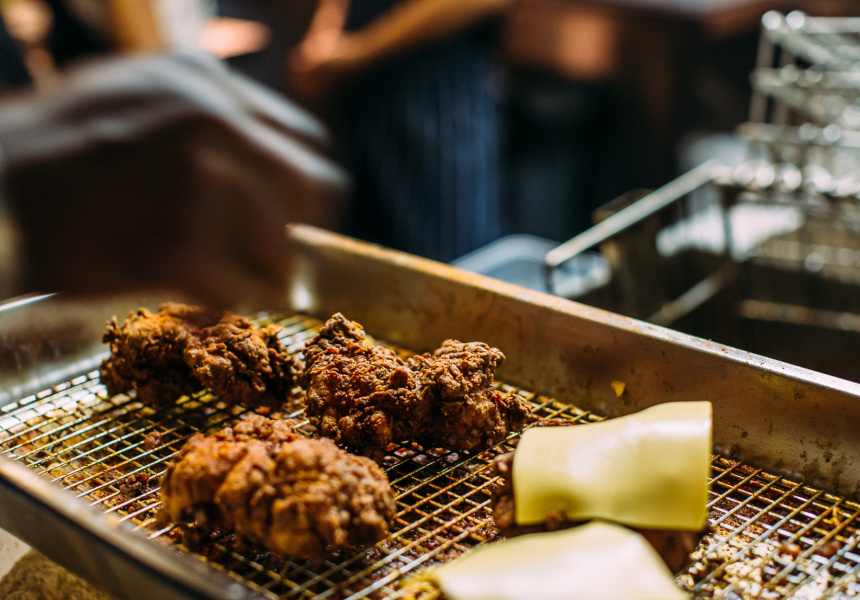 You’ve probably noticed it. That living-room-sized box scrawled with graffiti and burger iconography. The one with the constant lines. That’s Mary’s CBD, the second iteration of Kenny Graham and Jake Smyth’s cult beer and burger bar in Newtown.

There’s no whisky, Young Henry’s or Tom Shobbrook wines here, though. In fact there’s no booze at all. This is American-style fast food in its purest form – no seats, toilets or really anything at all besides a tiled takeaway counter pumping out those famous burgers.

The two signature burgers (Mary’s with beef, American cheese, lettuce, tomato, onion and Mary’s sauce; and the cheeseburger with beef, double cheese, pickles, onion, ketchup and mustard) and the fried chicken have made the voyage to the takeaway site.

Breakfast is served until 10am on weekdays. There are be muffins with different fillings: mortadella, egg and cheese; “trashcan” bacon, egg and cheese; or mushroom, egg and cheese. The Mary’s brekkie burger comes with a mountain of sausage, bacon, cheese, hash brown, HP sauce and maple syrup. Then there's hotcakes, porridge and scones.

Rather than booze, the carbs and meat can be washed down with a coffee by Loggerhead Coffee Co, or a thickshake. Shake flavours change all the time but there's always one chocolate and another featuring the house-smoked golden syrup.