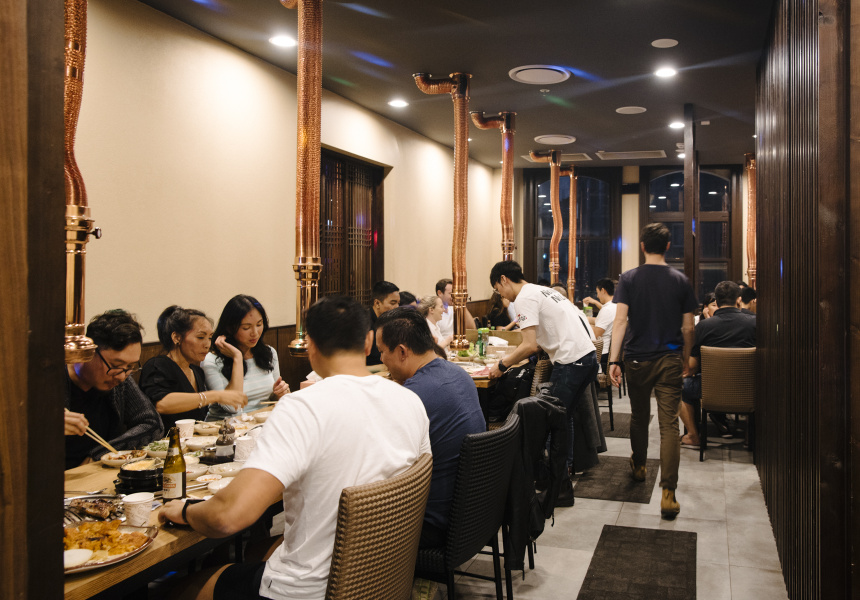 DIY charcoal barbeques aren’t unusual these days, but nine years ago, when Jang Ta Bal first opened in Strathfield, it was a revelation. It served up loud music, cheap drinks, affordable Wagyu and charcoal barbeques on every table. No diner escaped the smokey dining room without smelling like, well, a barbeque. There wasn’t anything like it in Sydney, and it was packed from day one.

The three Jang Ta Bal outposts have the same menu but offer markedly different experiences. Strathfield is the loosest and youngest – go here for a big night, but only if you don’t care about smoky-smelling clothing. Campsie is a quieter and older affair, like the rural barbeques in Korea – take your family here. And then there’s the CBD, which is newer, flashier and falls somewhere in between the other two. Unless you go upstairs.

Since Jang Ta Bal opened in a store in the CBD, it's been the same story. Don’t come here for a quiet night. From the late afternoon onwards, queues are a constant. Inside, each table has a flaming grill and more empty cans of beer than people. The noise level is similar to a house party that’s warming up.

The vibe on the top floor is like a house party at about 11pm. There are disco lights and Korean party DJs on the stereo, and the normal decibel range for speaking is exceeded out of necessity. People aren’t here just to party though. People come to Jang Ta Bal for plates of raw crab doused in chilli paste, enormous kimchi pancakes, and, most importantly, beef cuts so marbled they look like they’ve been struck by fat lightning. (Others cuts aren’t so luxuriously marbled, but that’s fine because they’re cheaper.) There’s also tongue, pre-marinated bulgogi (thinly sliced beef), brisket, fat strips of pork belly, sirloin and scotch fillet. You cook it all yourself, of course, then eat it with ssamjang (a mix of fermented soybean and chilli paste), lettuce and raw garlic.

It’s an intense culinary experience, so be sure to finish the meal off with a bowl of refreshing cold noodles.